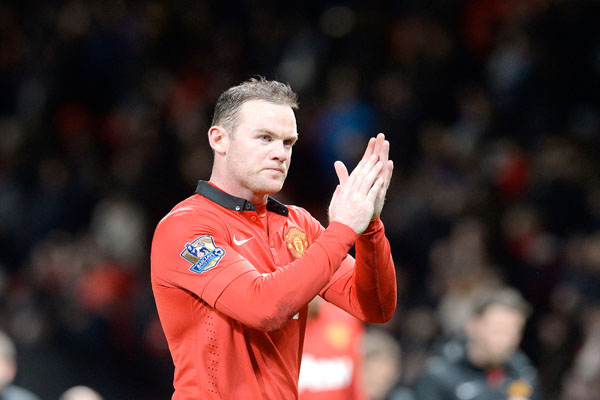 The 3-0 win over Olympiakos saw United overturn a two goal deficit for the first time in the club’s Champions League history. The result sees us qualify for the quarter-finals of the European competition. On aggregate, United beat the Greek champions 3-2 with not a single away goal scored in the tie.

In relation to Rooney’s praise of Moyes, the 28-year-old denied any suggestion of discontent at the club by saying that the team had played for Moyes against Olympiakos. The draw in Nyon later today contains only two English times including United. That being Chelsea, who won the Champions League in 2012 under similar circumstances to what the Reds currently find themselves in.

Rooney said: “I’ve said before our performances this season haven’t been good enough and we owe the manager a big performance, but we know as players we are better than what we’ve done this season. As a group we have to show that and put it right.

“I think it was always going to be tough when Sir Alex [Ferguson] left. It was obviously a massive change so we knew it was going to be tough but we didn’t expect it to be as tough as it has been. But we have to put that right. We have to keep working, keep believing in ourselves and hopefully it’ll get better.”

He added: “I think Sunday [against Liverpool], as all the players will admit, was a devastating result for us. To lose 3-0 the way we did was hard to take and we had to stand up and show ourselves and really be at our best [against Olympiakos] because that [Sunday] was not good enough. We have done that but we have to kick on now and we have to give performances like that every week.”

“Yeah, I think we can, I think in cup football anything can happen. With a bit of luck hopefully we can go far. We’re in the quarter-final so you never know what can happen from there. It’s a massive win tonight and we’re looking forward to the draw.

“I think it is [a strong draw]. You look at the three Spanish teams left in the competition, they’re all good teams. Chelsea are probably playing the best football this season and obviously you’ve got Bayern Munich. PSG are playing well. It’s a talented group of teams so whoever we get I’m sure it will be a tough game.

“We have to [maintain urgency]. That’s been part of our DNA over the years I’ve been here – that intensity, that running off the ball, the pace we play at. It’s a big part of the way we play and [the Olympiakos game] showed that when we do that to teams it’s difficult for them to stop us.

“I think we’re spurred on by the way the games and results have gone, it’s not necessarily the comments which people have made, it’s more the fact that we’re not getting the results and as a team it’s hard to take so we’ve kept working and hopefully it’ll get better.”