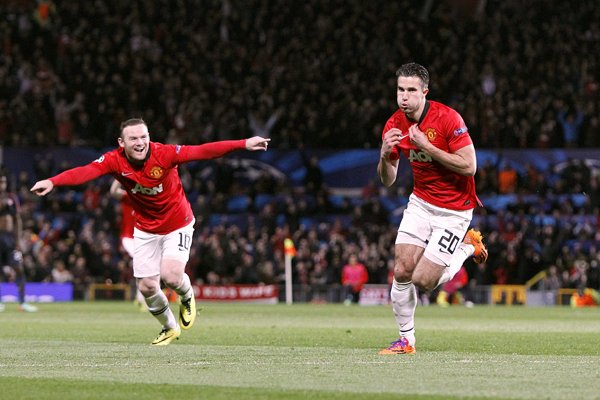 Wednesday night’s glorious win over Olympiacos, a ray of light after a dark, dark season, meant everything and nothing. Everything to the fans, a spine-tingling, heart-pumping night of excitement, noise and a glimpse of the Manchester United that we saw with such incredible regularity over the last twenty-odd years under Fergie. This was the talent, tempo, passion and fight that we knew was within the players, but that we’ve seen in only fleeting glimpses since the beginning of the Moyes era. It meant everything to the players, so clearly low on confidence and belief, a crackling night under the lights at Old Trafford, a final throw of the dice in a match that provided the last infinitesimal crack at ending the campaign with a trophy, a Champions League place for next season and some sense of achievement. The goofy smiles on their faces at full time and the overexcited interviews giving away just how cathartic a night it had been. And it meant everything, no doubt, to David Moyes, all too aware that after eight months of false dawns and decline he was clean out of lives. All went to bed with a smile on their faces and slept soundly. All will have woken up this morning with that same smile, at last a night to celebrate and remember.

And yet it also, in the context of the story of the whole season, meant nothing at all. In a campaign that has so far seen United play 43 games, such fight, spirit, talent and adventure has been the exception rather than the rule. We can point to only 3 or 4 other matches where the fans have come away with a sense that they’d seen something significant or special that made the hairs stand up on the back our necks: Arsenal at home in the League, Leverkusen away in the Champions League, Liverpool at home in the Carling Cup. Aside from those performances there has only been the odd glimpse of anything out of the ordinary, something to link this United team and squad, consisting largely of the same players that won the title in a roller coaster of emotions last season, to that which created such drama in 2012/13. The significance of those matches mentioned and those which brought more gritty wins against less lofty opposition is that each was trumpeted as a turning point, the start of a new brighter future for Moyes’ Manchester United, and yet, without fail this team has reverted to type and deeply disappointed in the matches that followed. It has been one step forward and two steps back. Yes, this was a glorious, noteworthy, memorable night, but, as part of a wider analysis, it demonstrates nothing more than a one-off performance where the stars aligned. Until such out of the ordinary showings become the ordinary this match provides no more insight into the disastrous Moyes reign than the victories that came before it. Rather, it offers as many questions as answers. Where has this fight been hiding all season? Why only let the hand brake off now when all is virtually lost? Was this Fergie’s team playing from memory? The one thing that we can take from it, aside from a happy glow, is the knowledge that these players are not all as bad as has been suggested and that the talent to perform and achieve at a high level is there. This is not a vintage squad, but it is still a fine one with a number of wonderful talents who should be playing to their potential far more often. Taking this group forward is not the “enormous task” that Moyes claims it to be and United should not need to “rise again”. As @andersred opined on twitter, “The club wasn’t even on the floor a year ago, let alone in need of resurrection”. The club doesn’t need to start again, just add to and get the best out of what they already have.

In isolation, there was much to commend. Moyes, on this occasion, picked the right team, the inclusion of Ryan Giggs providing the catalyst for victory, offering a level of guile and creativity beyond the capabilities of any other midfielder in the squad. At 40, game time is naturally limited, but one wonders why a man with such a skill set has been absent from the first team picture for so long. The inclusion of Danny Welbeck on the left was also a success. Adnan Januzaj’s form has naturally dipped in recent weeks and, rightly or wrongly, the manager has protected him from the pressure and rigours of the Champions League. Welbeck had an exceptional night, a rich man’s Paolo Wanchope, pacey, languid, skilful and unpredictable, he stretched the Olympiacos defence with his pace all night, increasing the speed of counter attacks, holding the ball up, beating players and creating the space in which Rooney and most significantly, Robin Van Persie, revelled. For a man supposedly in an extended strop, the Dutchman didn’t half look happy to be there. After early wobbles, Phil Jones grew at centre back as the night progressed, which was lucky because Patrice Evra in particular was having a total stinker and Antonio Valencia demonstrated the unusual quality of being better at football with one eye than two. Michael Carrick’s contribution and ball retention was also an improvement on recent form, but the man of the match, even taking into account Van Persie’s hat trick, was David De Gea, whose fine double save in particular kept United in this tie. If that young man doesn’t get Player of the Season this year then the voting process needs an overhaul.

There should also, however, be some caution when reflecting on the performance. This is a distinctly average Olympiacos side by elite European football standards, a team who had lost on all previous eleven visits to England and who, at times on Wednesday night, repeatedly exposed the United defence. Were it not for wasteful finishing and the excellence of De Gea we would not be talking about who we would like to draw in the quarter finals and had we not performed so abysmally in Greece, it would not have been necessary. It was a chaotic, disorganised performance and the last twenty minutes was spent sitting back and holding on for grim death. The sight of Marouane Fellaini being brought on and shielding the ball desperately in the corner felt somehow wrong given who we and our opponents were. A better side than Olympiacos would have punished us, and a far, far greater challenge awaits in the quarter finals. Whilst it felt massive, a historic comeback and performance, this cannot compare with the famous game against Barcelona in 1984 or the recovery from 2-0 down in Turin in 1999. This was a fine achievement, particularly given our inability to score goals at home this season, played out in an atmosphere to match almost any at Old Trafford in recent years, but it means more than it should because of what has come before and because the Champions League provides the only glimmer of hope we have for success this season and for qualification for next year’s competition. This was a result achieved by sheer force of will, whether motivation or inspiration, rather than technical perfection, but then so were so many of the dramatic moments which littered Sir Alex’s final season in charge.

The big question, of course, is what this now means for David Moyes. It was a match which beforehand left many United fans conflicted. Few actively wished defeat on their side, hoping that said defeat would end his miserable reign, but also it would be wrong to ignore the concern inside that this one result and performance could prolong a managerial tenure for which not many see a positive future. As @ManUnitedYouth so eloquently put in on twitter post-match, “a United comeback’s always a buzz but I can’t lie, part of me is defo thinking ‘f*ck we’re stuck with him now aren’t we?’…” It is important, therefore, to separate the two strands of analysis of last night’s events. The positive: the night itself, the performance, the result, the atmosphere, a season still just about alive. And the negative: that a single swallow does not a competent manager make. Bathe in the afterglow of a famous European night at Old Trafford, until the weekend at least, but remember the context. It is a genuine fear for those who wish this wretched Moyes tenure to end that a single night’s inspiration will condemn them to weeks or months more of negativity and bumbling incompetence. That looked like Fergie’s team out there, but in the context of the season and despite the big decisions that Moyes undoubtedly made right, it felt like a fluke. A wonderful, memorable, joyous fluke, but a fluke all the same. Perhaps if United go on to perform against and beat West Ham and, more significantly, City, then we can talk about an upturn in managerial performance, but all of the available evidence thus far suggests that a fall is on its way. When making vital decisions about the future of the club the owners and board members should not be swayed by occasional nights such as these and recognise the bigger picture. Maybe it is reasonable that this result should buy Moyes a few more matches to prove us all wrong. Most fans, myself included, would love him to. But many are also realists and are able to interpret and rationalise the way the season has unfolded. Deep down, we know he isn’t the right man for the job and this crazy, heart-stopping, delight of a football match does not change that. But for the next couple of days we should try to enjoy what our team has done and realise that a lot of quality most certainly is there to take us forward and with a few additions and high-class coaching, Manchester United are not so far away from being competitive alongside the elite. For the fans, players, manager and probably the owners, it was a match that meant absolutely everything, but without more of the same in the coming weeks, will mean nothing at all.