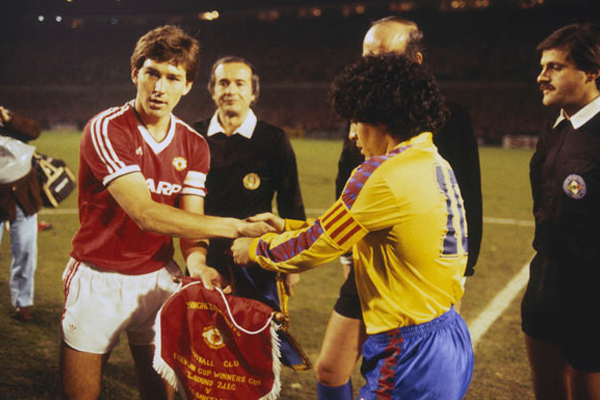 After his team’s abject performance in their first leg against Olympiacos, David Moyes may be short of ideas for how to inspire United to a miraculous comeback in the return tie. He could start, however, by looking back through the archives almost exactly thirty years and the last time United overcame such a deficit, defeating Barcelona 3-0 in the European Cup Winners’ Cup.

On the 21st March 1984, United welcomed Barcelona to Old Trafford after a 2-0 quarter-final defeat two weeks earlier. A Graeme Hogg own goal, on his European debut, and a last minute Juan Carlos Perez Rojo strike had meant that the Reds had felt hard done by, yet their progression to the semi-finals was deemed incredibly unlikely. However, a spirited performance from United swept away the Spanish giants 3-0 and booked their passage to the next round.

The man of the match was Bryan Robson with two of the goals. United started with clear intent and pressed their opponents with energy and aggression. Barcelona appeared flustered and they caved in after twenty-one minutes when Hogg’s flick on from a Ray Wilkins’ cross was converted in by Robson at the back post.

In the second half, United’s pressure did not cease and their relentless pursuit for goals was rewarded in two stunning minutes. The clearly rattled Barcelona backline made a series of mistakes, including an under-hit back-pass, which culminated in United’s equalizer in the fiftieth minute. Wilkins’ shot should have been saved by Javier Urruticoechea but his fumble was tapped in by Robson. A minute later, Norman Whiteside towered above the defence to cushion down an Arthur Albiston cross towards Frank Stapleton who smashed the ball into the net for the winner. After successfully defending their lead for the remaining half an hour, United celebrated a magical victory. Though they were to be beaten in the next round by Juventus, this game has been regarded as one of the greatest European nights in the club’s history.

So can history repeat itself? One reason to be optimistic was that in theory, this Barcelona team was stronger than the current Olympiacos team. Despite being without their injured captain Sanchez, Barcelona could call upon a selection of Spain internationals as-well as their two huge foreign names. Bernd Schuster was a powerful midfielder, already a staple part of West Germany’s side. He would controversially retire from international football at the age of 24 and transfer to Barca’s enemies Real Madrid. The star man though was Diego Maradona who was playing his second game on English soil after appearing for Argentina at Wembley in 1980 and was by 1984 well on the way to becoming one of the greatest players of all time. To top things off, Barcelona were managed by Cesar Luis Menotti who had managed Argentina to World Cup success in 1974. In their two previous rounds, they had knocked out Magdeburg 7-1 on aggregate and NEC 5-2. With this form, and their significant reputation, there was much more to fear from these opponents than the Greek champions generally viewed as the weakest side left in the tournament.

Secondly, United were inspired by a talismanic display by a player whose departure had been rumoured about. Before the game, gossip had spread that Bryan Robson had been targeted by several Italian clubs, including Juventus and Sampdoria. To prove such concern, thousands of United fans signed a petition before the match urging their captain to stay. His will to win and determination drove United to victory. Though he plays in a more advanced role, could United be inspired by their talisman Wayne Rooney, the only player this year to have played with some distinction? With a new contract signed amid fears of a departure, it is not unreasonable to suggest that Rooney could guide his teammates through to the next round.

Robson stated that that night was the best atmosphere that he had experienced at Old Trafford and the crowd was seen as a big factor in the success of that night, in both rattling their opponents and encouraging their team. The crowd this season has been patient with Moyes and his men this year, despite many disappointments. It is undoubted that the atmosphere will be electric so maybe this could push United through.

However, there are some reasons to feel that history will not repeat itself. Though ridiculed and dismissed as unsuccessful now, Ron Atkinson had more cup pedigree than David Moyes. He won the FA Cup in his second season, defeating Brighton 4-0 albeit in a replay. A major concern with Moyes is his lack of trophies. Too often with Everton he failed to progress through a round when really he should have, such as the 3-0 hammering at home to Wigan in last season’s FA Cup. After already failing to progress rather simple home ties against Swansea and then Sunderland, victory seems unlikely especially when the odds are even more stacked against.

Crucially, United were in good form before their game against Barcelona, which is in stark contrast to the team now. Under the entertaining Atkinson, United scored plenty of goals. In the few weeks before the first leg, United were undefeated and had enjoyed thumping away wins against Luton Town in February, (5-0) and Aston Villa four days before the first leg (3-0). Four days before the second tie, United had hammered Arsenal 4-0 with Robson and Stapleton adding to Arnold Muhren’s brace.  Moyes’ cautious and conservative approach to games means that United may struggle to have three shots on target against the Greeks, let alone three goals without reply. Unlike in 1984, United thoroughly deserved their 2-0 defeat and their dejection showed their lack of appetite and fight. Moyes, slumped on his seat, symbolised this lack of belief that seems pandemic this season.

If the form book is continued and there is a display as lack lustre as in the first leg, it is certain that a stuttering exit from Europe at the hands of the poorest opponents left in it will just add to the list of disappointments from Moyes’ debut season. However, such a reversal has been achieved before and this fact alone should offer some hope for United. Let’s hope both the manager and players can believe that this miracle can be achieved again.