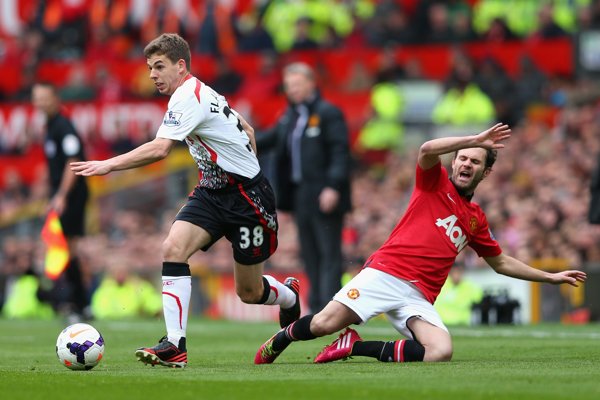 Juan Mata has not had the easiest of times since joining from Chelsea, but he remains in a positive state of mind despite Manchester United’s 3-0 defeat at the hands of Liverpool.

Writing his blog following Sunday’s defeat, Mata thanked the fans for their support.

“There are no words to describe your support in the stadium,  in games like yesterday it makes me mad not being able to give you what you deserve. I know there is nothing I can say right now but at least I want you to know how I feel.”

You would have to dig deep to find any positives from the game but the support from the Old Trafford faithful was phenomenal. We were 3-0 down to our greatest rivals at Old Trafford yet the United faithful sang their hearts out until the final whistle. It didn’t matter that we once again played terribly and were disappointed, in the 90th minute “20 times” was heard ringing around the stadium. Mata definitely acknowledged this and it was clear in his blog post. Not only did he show his appreciation for the fantastic support he also added how he was “mad” the team couldn’t get the result for the fans.

“The storm will pass and the sun will rise again. I have no doubt, besides, no-one said this would be easy but this is football. It gives you fantastic moments but also very hard times you have to cope with, when you have to show pride and professionalism until the end. And when all this is gone I’m sure I will be a more mature footballer.”

His attitude towards the current situation is fantastic. Not once has he complained, he’s remained positive and even said this experience will help him mature as a player. That’s exactly the mentality every single one of our players should have, unfortunately not everyone does.