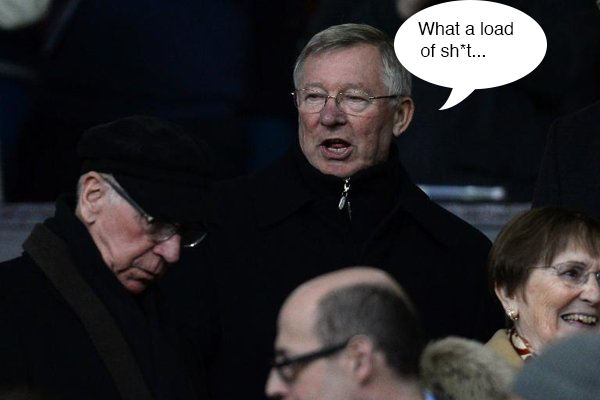 Late on in Sunday’s humiliating deconstruction by an energetic, pacey, vibrant Liverpool team coached by a young, tactically astute manager, whose tenure at Anfield has seen him experiment and develop his own skills as well as those of his players, the camera panned to a close-up portrait of the man who built modern day United. A man who took a club settled in mediocrity, a place where failure was the accepted norm, and built a dynasty based on the highest standards of excellence, where second was a dirty word and a never-say-die attitude permeated the very fabric of the place. The camera has panned to that man on numerous times during this wretched season, as defeat after pathetic defeat, many on our own turf, have reduced his team to rubble. In the past, Sir Alex’s deadpan expression has given little away, but on Sunday his poker face failed him. It was a face of thunder, of fury and disgust, entirely appropriate given the disintegration of all of the standards he imposed on ‘his’ club, summed up by one pathetic, gutless, spineless, clueless performance against his and our greatest foes. Last week I spoke about the forthcoming games against Liverpool, Olympiacos and City as being opportunities for the new manager and the team to provide us with some positive memories in a season so utterly devoid of anything approaching vague competence, let alone memorable excellence. In the end, what transpired will long live on in the memory for both sets of fans. It was a performance and result which will go down in folklore at Anfield and will remain a wretched, rotten stain in the modern day history of the club that Fergie built and David Moyes has betrayed and destroyed, by words and deeds.

And yet, explaining the fury in Sir Alex’s face and eyes is not a simple undertaking, for whilst anger and contempt are the correct responses to Sunday’s farce, the target of those emotions remains unknown. Is it the players, many of whom have clearly stopped playing for their hapless manager? Is it Moyes, the continuity candidate who instead turned a high functioning institution upside down, sweeping away staff, continuously lowering expectations at one of the world’s biggest clubs, criticising the players left behind by the great man, the scouting system and the academy? A man with no history of excellence or success, who has felt from day one that he knows best, better than his predecessor, than his scouts and his staff? Or is the target of Fergie’s anger himself? He must know now that his final and arguably biggest ever decision, to appoint his own successor, was fatally flawed and that he, the man who built his red machine, is as complicit in its destruction as the unqualified, negative, incompetent fool that he successfully argued should take his place. It is the ultimate irony that his last act was to unwittingly sabotage his life’s work and passion.

This is no longer a crisis. A crisis is where we were after the home defeats to Everton, Spurs and Newcastle. We’ve long moved on from there, passed through the ‘shambles’ months of January and February and now find ourselves in full surrender. There’s no way back from here under David Moyes. The players know it, the fans know it, even Moyes himself knows it. And behind those furious, squinting eyes Fergie knows it too. The Liverpool defeat was the most abject, pathetic, toe-curling surrender many of us have ever seen, a performance utterly draped in Moyes the manager, from the rigid, ineffective 4-4-2 formation most recently seen in Athens, designed solely to stop the opposition from hurting us, to the incompetence of defending and the total absurdity of playing possibly the finest attacking midfielder in the country, Juan Mata, as an orthodox right winger. And with the game slipping away, his side overrun and creating only one chance of their own, he sat, eyes glazed over and did nothing. Absolutely nothing. No change of system or personnel for over 70 abysmal minutes. An animal frozen in the headlights of an oncoming car. He’s given up. His post-match comments smacked of a man who knows it’s all over, that his every day is now another 24 hours on borrowed time. That he remains in his post today is staggering. He has made a laughing stock of the club and fools of its fans, who embraced him as ‘the chosen one’ and stuck by him as he made one astounding gaffe after another, from the farcical transfer window, to the conscious lowering of expectations and the astonishingly naïve, dated and ugly tactics. All have been a betrayal of the essence of Manchester United, ethics that demand more than ‘trying’ or making it ‘difficult’ for modest opponents and require progressive, attractive and inspirational football and a never-ever-say-die attitude. This is about more than terrible tactics and goes to the heart of what Moyes expects of and is acceptable from himself as United manager and of his players. He could not have misjudged the requirements of the job more if he’d tried. If an imposter had assumed his identity with the intention of sabotaging the club they simply could not have done a better job.

Until recently I felt that the post-apocalyptic wasteland that we currently inhabit resulted solely from his lack of ability as a coach rather than a reflection of Moyes the man. The game had moved on and his tactics are outdated, simple to overcome and have sapped the confidence from a whole squad of top-class footballers. But his role in this is far more complicit than simply a lack of ability on the training ground, where endless defensive drills have replaced methods which enormously successful footballers were comfortable and succeeding with. This is about more than professional naivety and limited skill sets. It is about the man, his responses to failure, the inability to accept any culpability or to try to better himself, to listen to those around him and take a risk. Professionally he has become a blinkered coward and he now has a cowardly team built entirely in his image. Rather than accept responsibility he has blamed almost everyone and everything but himself: the players, the FA, referees and luck. Even when paying vague lip service to the idea that he needed to do better, he has given the game away time and time again by making no effort whatsoever to change. He has alienated staff and players and, if the stories are to be believed, even the mild-mannered Ryan Giggs has been sickened by the betrayal of the club’s principles by his boss. Moyes may be a good, kind, hardworking man, but as manager of Manchester United his psyche is fundamentally flawed. He’s played the fans for fools, manipulating them in an attempt to hide his own incompetence and make us think that he was given a hospital pass by his predecessor, a club which, supposedly, even the governing body of the game of football is conspiring to bring down. And the club and Fergie are entirely complicit in hiring and continuing to retain a man without the skills, self-awareness and bravery to handle the job.

So where do we go from here? It seems unthinkable that this will be allowed to go on for much longer. At any other club he would have been fired in January, but post Fergie, Old Trafford is the place where logic goes to die. For the fans who sang defiantly during Sunday’s tragicomedy this has gone past disappointment, concern and anger. The mood is now more one of grief and utter helplessness, a large part of something they love is dying in front of them and they are powerless to prevent it. It’s a footballing waterboarding. Death by a thousand cuts. We now face games with no hope whatsoever, no expectation of the “fight” which Moyes again erroneously attributed to his team on Sunday. We face Olympiacos, two goals down, our feelings about the game utterly conflicted. Few believe that we can recover and progress, but if we do, what awaits? Bayern, Barca or Real will inflict defeat so comprehensive and humiliating that it will disfigure the history of the club. Regardless of what happens from now on there can be no long-term future for Moyes at United. But the longer it goes on the graver the damage to the club and squad will be. If he remains in the coming weeks expect no public contrition from Fergie. His only out from here is to distance himself from the club decision-making process, stick to his mantra that Moyes would have succeeded if given time and make it clear that the end was not his doing. For Ed Woodward and the Glazer family, so complicit in this shambolic farce, the loss of face that would result from sacking a man to whom they had promised time and patience is now far outweighed by the sense within the game of their utter incompetence in allowing this to continue and the economic consequences of our staggering fall from grace. No sane or savvy business man would willingly perpetuate such circumstances. And so we simply wait for it to be over. All of us. The fans, the players, probably Moyes himself, a wounded soldier, holding his innards in his own hands, waiting and hoping for the end. For all of us, this is torture. We can only pray that the end is swift and painless.