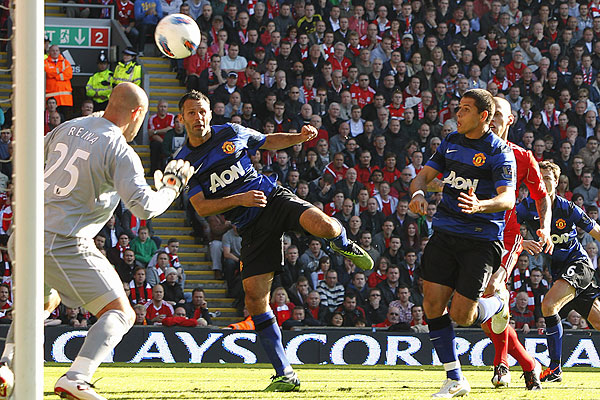 United go into tomorrow’s game against bitter foes Liverpool looking to derail any chance they might have of winning the title, god how painful it is to type that.

This is one of the biggest derby’s for some time, a lot hinges on this game- it will be a big test of David Moyes and just how much/little he has grown into the role, players are arguably playing for their futures, they, as a collective unit, need to give us something to shout about tomorrow.

Here’s the XI that could take to the field at 1.30 pm on Sunday:

Rafael- Pips Smalling to the right-back position for his attacking qualities, in a game where we will need to take our chances, Rafael can provide the service, over-lapping Juan Mata.

Phil Jones- Will look to build on a goal at the Hawthorns in a game he will surely relish.

Nemanja Vidic- The departing captain will be an important figure tomorrow. David Moyes said yesterday that Vidic still has a big role to play, seemingly implying that Vidic was made for this sort of fixture. His experience will be crucial. For that reason, he might get in ahead of Chris Smalling (who is a tad unfortunate to miss out, given he was excellent at the Hawthorns).

Marouane Fellaini- Is looking more and more comfortable with each passing game, growing into the role alongside Michael Carrick. Massive opportunity for him to showcase his talent up against Gerrard and Henderson. Another good showing here will endear him to the United faithful.

Ashley Young- As tempting as it was to throw Danny Welbeck in here after his great cameo against West Brom, Young gets the vote in the majority of the bigger games, mainly for his defensive work-rate in assisting the troubled Patrice Evra, particularly against the pace of Sterling and Daniel Sturridge on their right flank. We feel that Young will get the vote ahead of Welbeck and Januzaj, with the latter two providing a spark and impetus off the bench if needed.

Robin Van Persie- Allegedly happy at United despite all the media rumblings that all is not well. Well, what better way to demonstrate this loyalty than denting their title hopes? Scored at Anfield and OT last season against Liverpool, he is due a good performance and a goal.