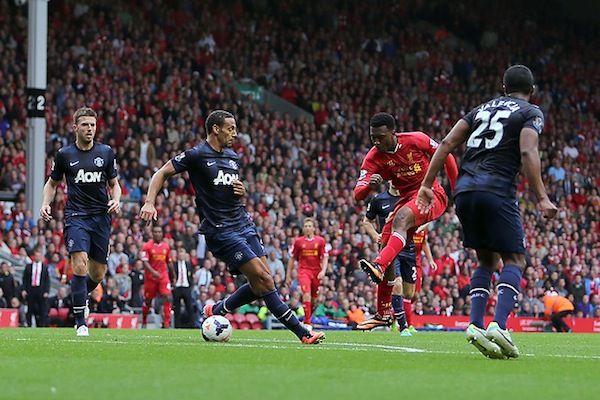 Manchester United meet Liverpool on Sunday in one of the fiercest rivalries in football. However, this game poises a crucial test for David Moyes tactics and techniques, with a crucial match against Olympiakos just 3 days later. Moyes will have to not only have to try and play his best team on Sunday, but will also need to leave himself enough options to try and provide a European comeback on Wednesday night.

Obviously, we come into this game on the back of patchy form. 5 wins in the last 10, with disappointing defeats against Stoke and Olympiakos. The 2 draws in this period, against Fulham and Arsenal were also ultimately frustrating and certainly feel like games where points were left behind. Despite the stuttering for, United come into this match after arguably our best domestic performance of the season. Assured on the ball, with pace and a killer touch, the game at The Hawthorns could light the touch paper for a late season rally. How many times have we said that?

Meanwhile, and rather annoyingly, Liverpool are hitting their stride and increasing posing the question as to whether they can win the title. Whilst, it still to me remains unlikely, it is clearly a possibility. Liverpool form coming into this game is one that is very consistent, as would be expected for a team in their position. The only loss in their last 10 matches was the 2-1 defeat to Arsenal in the FA Cup. The Merseysider’s will have been disappointed with 2 draws against Aston Villa and, more worryingly, West Brom, who last week looked somewhat like a team you’d fancy your chances against in a jumpers for goalposts scenario. Away from home however, Liverpool’s consistency is not as obvious as their home form. Liverpool only have a 43% win record away from home, a figure that rises to 86% at Anfield. Worryingly however, away from home, Liverpool have the best attack, averaging over 2 goals a game.

Liverpool haven’t dropped outside the European qualification places all season, and their win at Southampton 2 weeks ago saw them rise from 4th to 2nd, their highest position since they topped the table on Match 16.

As for United, its 6th at the moment, 5 points behind Spurs in 5th and in affect 11 behind Arsenal in 4th, as City have 3 games in hand whilst currently sitting in 4th. Back to back wins have narrowed the gap to Spurs after they suffered a heavy 4-0 defeat to Chelsea last time out.

The last 5 league meetings have brought The Reds 3 victories. Last season saw us do a 2-1 double over Liverpool en route to the title. Rafael’s curling strike and Robin Van Persie’s late penalty brought victory at Anfield, whilst Nemanja Vidic scored the winning goal at Old Trafford. In 2012, a Wayne Rooney double was enough to edge us to the 3 points, while the renewal on Merseyside was a 1-1 draw, Javier Hernandez with a late goal to peg back a Steven Gerrard goal. The fixture earlier this season lingers like a bad taste in the mouth. An abject performance in which we held all the possession and turned it into little of attacking merit. That meant that Daniel Sturridge’s early goal was enough to win it. The less said the better. Outside the league, a Javier Hernandez goal gave us the victory in the Capital One Cup earlier this season.

Injuries have been problematic for us this season, but as we approach arguably the most crucial fortnight of our season, things are looking up. Rafael should be fit despite being subbed off against West Brom late on in the game. United are still without Nani (hamstring). It’s pretty unlikely that any of these would have made the starting 11, so injuries are not something that are crippling us coming into this game.

As for Liverpool, Brendan Rodgers also seems to have a pretty clean bill of health. Mamadou Sakho and Lucas may both be available for selection after a run out for the reserves last week. Jose Enrique is a long term absentee with a knee injury and will remain unavailable.

Bugger. Everybody’s favourite Mark Clattenburg takes the whistle for this game. He’s only issued one red card all season, something that must have factor in when he was appointed to this game. Our record this season under Clattenburg is played 4, won 3 lost 1. One of those victories came in the Capital One Cup against Liverpool.

4-2-3-1 now seems to be Moyes preferred formation to fit everybody in. It seems clear to me that he’s likely to stick with this and try and dominate possession. The question is how does Moyesy see fit to rotate with the Champions League very much on the horizon. For me there will have to be some big players rested, and I fully expect that RVP may well be rested. I assume that Nemanja Vidic will be rested for Wednesday as well. Juan Mata is cup tied in Europe and will definitely start. We all know how Wayne Rooney loves to play every match, and he can still clearly do it, and should be utilised. Shinji Kagawa performed well off the bench at WBA, and may well be trusted here for his work rate, allowing Adnan Januzaj to be rested. For those reasons, my predicted XI is: De Gea, Rafael, Jones, Smalling, Evra, Carrick, Fellaini, Welbeck, Mata, Kagawa, Rooney.