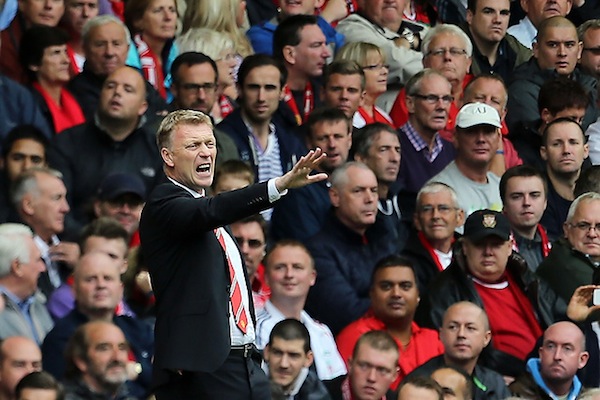 David Moyes addressed the assembled media at Carrington today on the eve of potentially one of our biggest games of the season. United go into the game against bitter foes Liverpool with some confidence boosters- players slowly returning to fitness, a defence that has kept 3 consecutive domestic clean sheets, promising attacking signs and news that filtered through last night that Robin Van Persie dispelled the incessant rumours that he is unhappy at United and would look to jump ship.

Moyes has found the Van Persie rumours extraordinary, claiming he did not know where they had stemmed from. Ultimately, he maintained his belief that the player was content and there are no issues there, despite a seemingly lethargic demeanour and off-colour performances by his high standards of late.

“I’ve been telling you that [he’s staying] but you’ve wanted to say or write something different.

“It’s difficult if you don’t believe what I say. Robin is happy here and I’m pleased about that. I didn’t know what was coming out – I’ve only just heard this morning about it.

“We’ll take it as it is. He has a couple of years to go on his contract and I’m sure that will be something the board look at.”

Moyes has clearly been buoyed by recent news, firstly Wayne Rooney’s eye-watering contract extension, followed swiftly by Van Persie’s claim that all is well. He chose to focus on both player’s qualities, claiming that ‘any side in the world would want them in their team’.

Despite Moyes seemingly wanting to take the pressure off his men by saying that those who believe Liverpool come into the match as favourites may be justified, it seems as though the importance of this fixture has not been lost on Moyes, who knows that the game could be pivotal in shaping the sides’ respective destinies,

“It would be a big boost to win. It’s still the biggest game in the country and we’ll do everything we possibly can to beat them.”

Moyes provided fitness updates on Rafael, Jonny Evans and Javier Hernandez, all of whom have a chance of being involved at the weekend. This coincided with a surprise return to training for Nani, who has not featured since the 0-1 home defeat to Newcastle with a hamstring injury among other things.

It was put to Moyes that maybe the game had more in it this year due to United’s league position, one of our aims would be to derail both Liverpool and City’s title bids. Although Moyes, in typical fashion, straight batted the question insisting that we will only focus on doing well as we can, this season has been a painful adjustment, therefore getting one over both of them (hopefully) would be euphoric and something to savour from this season.

Moyes talked well about the confidence from the players and the staff ahead of three massive fixtures that could decide the fate of a lot of personnel as far as we are concerned,

Let’s hope Moyes and the players give us a weekend to remember and something to shout about, getting one over that lot would be so sweet.