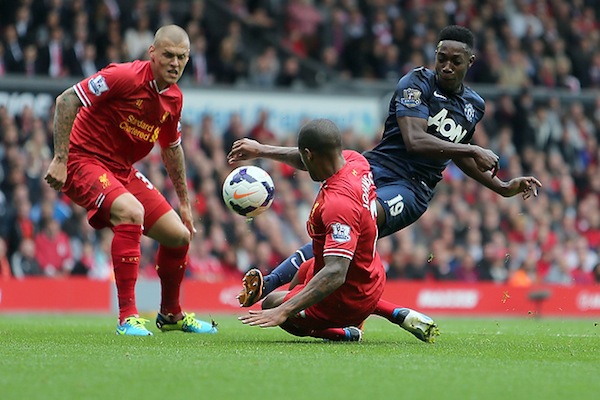 Dale: How do you rate your season so far?

Karl: Couldn’t be happier. Most definitely did not expect to be challenging for the title this season, though I did have top four as an expectation and that could yet be what our season gives us and nothing more. But even in that case, the season has been a big success and has given us a lot to look forward to. We had a period earlier on in the campaign where it looked as though we might lose ground on the top four, but since the midfield shape has been sorted out we look capable of beating everyone.

Dale: Who has been your best player?

Karl: There have been a lot of really, really good players this season. But for the actual best, you cannot look beyond Luis Suarez. The guy is absolutely phenomenal. He rarely has a game where he doesn’t make an impact and his scoring rate is incredible.

Dale: And who has been most disappointing?

Karl: Glen Johnson. He had a few games where he played well earlier in the season, but by and large he has been off form since last February. Considering his position with his contract, younger players pushing him for places and the evolving nature of the team, a lot more was expected of him. We need our full-backs to be very good indeed; he should be, but he hasn’t been. It’s not to say he’s been the worst in the squad necessarily, but given what he is capable of and what we’ve actually seen from him, that makes him most disappointing.

Dale: Will Liverpool win the league?

Dale: How popular is Brendan Rodgers among most fans?

Karl: Very! Of course there have been dissenters along the way who didn’t like his credentials, his mannerisms, his transfers or whatever, but that happens all over. It’s rare now that those people raise a voice and of course plenty have been willing to say how he has proved them wrong over time. He gets applauded and chanted at during most matches, he has shown great capacity to learn with his selections and substitutions as the season has gone on, and generally speaks very well. As ever, results will dictate how long that lasts with many but right now he’s at the crest of a wave.

Dale: We spoke to Paul of The RedMen TV earlier this week and asked if he had the option, would he pick Rahem Sterling or Adnan Januzaj. His response made us laugh (he said Sterling). Will yours do the same?

Karl: Hahaha. Paul is spot on. Sterling every time. Let’s look at Januzaj this time next year when he has another 1,000 minutes of Premier League game time under his belt and see what kind of consistent creativity he can bring. He’ll have a dip at some point like our Sterling did, the key to how well he’ll do for you is how he is treated throughout that by the coaches and how strong he is himself to come out the other side.

Dale: Thoughts on your American owners?

I’ve never minded them to be honest. They weren’t going to be perfect because they knew nothing about what they were getting themselves into, but we’ve made consistent, tangible recoveries in every area of the club. Commercially we are the best performers outside of CL clubs, so assuming we do get there for next season, there’s further scope for significant growth on that side of things. They’ve been to two finals, won a trophy, brought in a manager, have made slow (but still visible) progress with the stadium and seem to be finally sticking with a formula for transfers. Whatever you think about each decision they’ve made, it’s been decisive each time and if it hasn’t worked, they’ve taken steps to rectify it. I don’t really ask for anything else.

Dale: What’s your biggest game of the season? United or Everton?

Karl: Horrible question. My thoughts on it generally change according to position and situation in the league each time…so right now is United. Sorry (although not really), but we want to be driving home another memorable defeat into your horror collection that is this season, and get ourselves closer to sealing a top-three spot as we go.

Dale: It looks like you will qualify for next season’s Champions League, but tell us how much you’ve missed the competition?

Karl: Huuuugely. I couldn’t even watch the group games in 2010-11 when we weren’t in it. Truth be told, I couldn’t even contemplate that we’d face four years of that at the time…but each November or so, you realise that there’s no way you’re gaining back enough ground and another season of nothing—or worse, the Europa League—awaits.

Dale: Predict the result of the game this weekend.

Karl: There’s no way this game doesn’t have a load of goals in it. I’m going 4-2 to Liverpool.