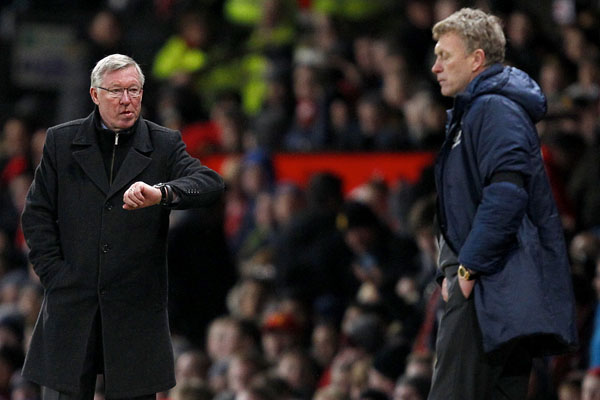 I don’t know how nervous David Moyes gets before games. Much of the time he looks utterly terrified. But if he doesn’t have a growing nervous sickness in his stomach now then he never will because the next three games will likely forever define his time as manager of Manchester United. He is at a fork in the road. To the left is the path he has taken for most of the season, a direction dominated by caution, pragmatism and inaction, an approach which has left him in the precarious position he and the club currently find themselves, with little left to play for. It is unlikely even pride could be salvaged from this wreckage. To the right is the road to redemption, a long and testing choice requiring innovation and bravery, but the only route which could leave the manager with any long term future at the club. The answer seems to be an easy one, but Moyes has struggled for answers to even the simplest questions at times this season. Now he has no room for error and I’m sure he knows it.

Liverpool provide the first obstacle, a fluid, exciting team with a deadly attack but suspect defence. Brendan Rodgers sat in Moyes’ shoes in his first full season with his club and chose to innovate, slowly developing his short passing tactical preference into a counter-attacking style, complementing the players he had and was able to bring to the club. He should be the blueprint for a young manager moving to an elite team, realising that he couldn’t shape the club or his squad fully in his image and so should let them shape him. Moyes is not young. He got a break that none of the other giants would have given him in his fifties. And yet the only way for him to succeed from here is to think like a younger man, to wipe away much of what he has learned before and be what Manchester United and his playing staff need him to be: adaptable, progressive, proactive. Most of all he needs to set aside the stubbornness and reprogram his brain to allow it to accept that change can be good and that what was good for Everton may not be good or working for United. It is a stark statistic that his team have failed to beat every side in the League down to Southampton bar Arsenal at home, perhaps the one game where shape, tenacity and set pieces were likely to have a positive outcome. It is unlikely to work against Liverpool.

Recent weeks, in particular the away wins at Palace and West Brom, should have taught Moyes that greater attacking fluidity in a system with his most creative talents on the pitch can be extremely effective. In isolation these tactical set ups and performances give hope that the penny is finally dropping. But in between those two comfortable wins was the aberration of all aberrations in Greece, when the manager took all of the positive lessons from the previous weekend’s game at Selhurst Park and purged them totally from his team. Back came a dreadful, rigid 4-4-2 formation and in came Cleverley, Valencia and Young, three players who have come to symbolise the appalling drop in quality that has taken hold of the midfield in recent years. Out went Marouane Fellaini, who had impressed in London, and Adnan Januzaj, dropped from the squad altogether. What this suggests, on the evidence so far, is that whilst Moyes is able to bring himself to be more bold against struggling opposition as the stakes have got higher, his instinct is to revert to type against any opponent he wouldn’t trust his own players to go out and beat on their own. It is this caution and inability to fully immerse himself in change that leaves his side with such a wretched record overall and against the stronger sides they’ve faced this season.

The next three games, all at home, against Liverpool, Olympiacos and City will thus be the ultimate tests of David Moyes’ ability to override his pragmatic command circuit board and embrace a new path. There are limited outcomes from here, but the only one which will ensure his continued tenure at the club and retain or regain him the trust of the fans is to go out and win or at least go down displaying the blueprint of a new, more palatable plan for the future. Indeed, perhaps it is too late even for the latter, with goodwill now in such short supply and after so many mistakes and false dawns. Until now Old Trafford is the one place where United fans have resisted the urge to berate their manager, giving him far more patience and support than his performance to this point warrants, but you get the impression that if things get messy in the next ten days then the mood could start to get nasty. If that happens and with season ticket renewal time soon upon us it is hard to see how Moyes can continue past the summer at the latest. No company can afford to leave itself in a position where its most loyal customers are alienated and unhappy with the product or the decisions the business is making, even football clubs, where attachment is ingrained and unwavering. Manchester United, for all its noble sentiment about loyalty towards its managers, is a business like any other. The unique nature of a football club clouds matters slightly. It is that uniqueness which sees Moyes remain in a job he’d have long been fired from elsewhere.

These next three matches are no ordinary games either. They demand performances and a spirit of adventure. Games against Liverpool and City and those in the European Cup make up a good proportion of the greatest memories many United fans will have of their team. Winning feels like everything, losing feels like you’ve lost everything. Ask a Red of longstanding ‘what moments made them feel the best they ever have’ following the club and many will point to a magnificent European night or the great victories over their nearest and greatest domestic rivals. As I age and the memories of childhood start to fade the matches I still remember from the 1980s almost invariably involve such opponents: Barcelona in ’84, almost every game played against Liverpool, most notably the 3-1 victory at Old Trafford on New Year’s Day 1989, the epic ten man recovery to draw 3-3 at Anfield in 1988. My memories stretch even down to what I was wearing when I watched them. And in more recent years, little matched the celebrations and utter elation after the Camp Nou and Luzhniki, the wild, atavistic joy after Cantona’s winner over Liverpool at Wembley, Solskjaer’s in the cup game during the treble season, O’Shea’s winner at the Kop End, Rio Ferdinand’s late-headed Old Trafford goal. And against City, the slew of last minute winners that left us truly spoilt. It is hard to recall delirium much greater than that which followed Michael Owen’s one worthwhile contribution in a United shirt. These next three games matter to us more than any others. In a season so short on genuinely joy-inducing moments, David Moyes and the team have the chance to allow us spend a few days with big goofy grins on our faces, an opportunity to set aside a wretched few months for a few blissful days. It says it all that probably the most euphoric many of us have been this year was not following a goal or victory, but when we signed a player, Juan Mata.

So David Moyes approaches these next three games with the weight of his employers and the fans firmly on his shoulders, but we should not feel sorry for him. The latter is a given for any Manchester United manager facing the biggest of games, but the declining faith and trust of both is a cross of his own making, the result of a plethora of mistakes and a stubbornness so profound that he has been unable to see the woods for the trees. It is telling that Liverpool come to Old Trafford this weekend as favourites for the first time in over twenty years and with a shout at winning a Premier League title that ten months ago United had cruised to. Champions League football for next season is gone and continued participation this year is also looking a long shot. Although the seeds of the culpability for this mess were sewn by the Glazers and Fergie, the depth of the crisis is Moyes’ doing; his inability to motivate, innovate and admit the extent of his culpability have been his greatest failings. Now he has three matches that matter above all others to the fans. This is his last chance to put right those wrongs. He has the opportunity to inject new life into his stewardship of the club, regain some trust from his paymasters and the fans and, most importantly, give us some days that we will truly remember for many years. The gutless, clueless losses at Anfield, the Etihad and in Piraeus are three of the biggest stains on the patchwork quilt of dross that has made up a truly terrible season. By being brave and playing his best, most attacking side in the semi-fluid set up we saw at the Hawthorns, David Moyes gives himself a shot at survival. This season is a write-off, but at least give the fans the chance to say that, despite all that went before it, in the final act United ended the piece in style and, if we do get beaten, the manager can at least say he went down like Butch Cassidy and the Sundance Kid.