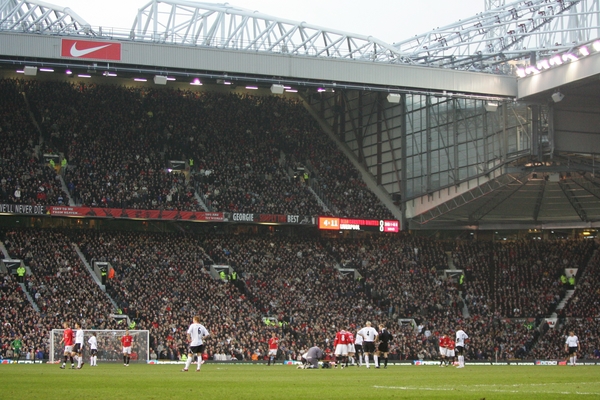 In a depressing sign of the season, United will be facing Liverpool this weekend aware that only one of the pair are challenging for the title. After twenty-one years of relentless dominance, it will be an alien sensation to know that a home victory will have more impact in denting Liverpool’s title bid than in igniting ours. Even the most biased of fans would struggle to deny that both clubs have enjoyed sustained dominance in England over a set period and whilst it would be premature to either confirm the end of United’s or the return of Liverpool’s, Sunday’s match is a role reversal reminiscent of the 1980s.

In the last two decades, Liverpool have rarely threatened United’s grip on the Premier League crown. In 42 matches, United have won twenty-three times but there have been some matches where Liverpool have taken the bragging rights. Danny Murphy certainly enjoyed his visits to Old Trafford, scoring the only goal in three separate victories (2000, 2002, 2004). Nemanja Vidic was given such a torrid time by Fernando Torres that he conceded a soft goal and got sent-off in a 4-1 loss in 2009 that looked like it may derail United and play into their rival’s hands. However, Liverpool had to settle for second place after United recovered form, memorably through stunning comebacks against Aston Villa and Tottenham Hotspur. Liverpool have also suffered from sending-offs, such as 2003’s 4-0 loss after Sami Hypia’s dismissal and 2008’s 3-0 defeat once Javier Mascherano talked himself into an early bath.

Liverpool won ten titles between 1976 and their last one in 1990. During that period, the record between the sides was well shared out (except when it came to the FA Cup when United never lost). At Anfield, Liverpool won six head-to-heads, United four, with six draws. At Old Trafford, United won five, Liverpool four and six draws. Regardless of the position in the table, a victory over their biggest rival was something for both United or Liverpool to savour in any occasion.

On the 5th April 1980, both teams were vying for the championship. Despite losing 6-0 to Ipswich Town on the 1st March, United had ended the month only four points behind their Merseyside foes. Kenny Dalglish opened the scoring after a quarter of an hour, drilling the ball in at the near post after Gordon McQueen slipped when trying to tackle him. United were soon level however when Mickey Thomas bundled in Steve Coppell’s centre on a quagmire of a goalmouth.

Next the Old Trafford faithful would witness a farcical episode. Firstly, United’s kamikaze offside trap was beaten by Alan Hansen who simply chipped the ball into the space vacated by the whole United team and ran onto his own ball. He squared it for Dalglish who added to the comedy of errors by somehow shooting wide when it looked easier to score. Liverpool would rue this missed opportunity when Jimmy Greenhoff flicked in a corner with his head for the winning goal. Ray Wilkins could have put the match within doubt but his superb drive cannoned off the bar.

This result kept United in the hunt for the title but unfortunately did not deter their rivals. Despite winning their next five games, they were only level on points with Liverpool by the end of April. They also had a game in hand, yet it did not matter, as United succumbed to a 2-0 away defeat to Leeds United, guaranteeing the league to Liverpool.

By New Years’ Day 1989, there was no way that United were going to be challenging for the title come May, yet as usual, as it seemed then, their visitors Liverpool were. When John Barnes cut inside to score via a deflection after seventy minutes it looked like Liverpool would be adding more points to their title charge. However, an incredible five minutes soon changed that.

A minute later, twenty-year old Russell Beardsmore ran down the wing and drilled the ball into the box. Despite the ball being behind him, Brian McClair swivelled and volleyed emphatically into the net. The goal was more in the mould of his strike partner Mark Hughes and it was he who gave United the lead after 75 minutes, capitalizing on a defender slipping to drive past the helpless Mike Hooper. The comeback was complete when Beardsmore volleyed accurately from the back-post to score his first and most memorable goal for the club. Liverpool would not win the league that year, and whilst a defeat on New Years’ Day cannot be attributed to this fact, this game at least gave the United faithful something to cheer on a season when they would finish eleventh.

Schadenfreude is a dangerous thing and we do not want to start wanting to win just to stop a rival winning the league. Liverpool’s attacking threat and high level of football this year has just been another worrying facet of a demoralising season but it would be too early to declare their resurgence or our demise. We should be going to the game hoping to see signs of improvement in our play and in our tactics, regardless of the opponents. However, the fact remains that wherever in the table the two teams lie, a win against our main rival is always special.