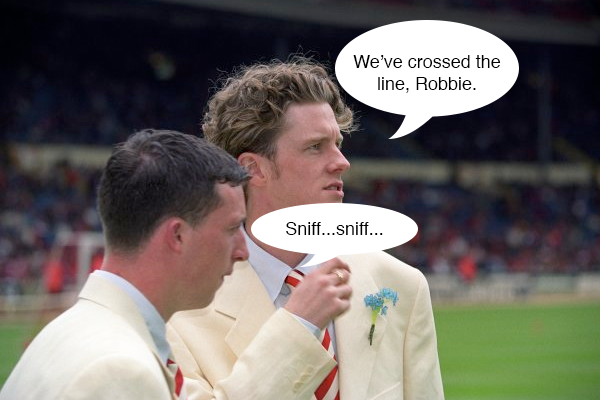 With United gunning for their second double in three seasons, this fixture reminds many of the 1977 final, when both sides met for the first time in the FA Cup and United denied Liverpool the double. Thankfully 19 years on the story was different and the Merseysiders were unable to deny United the double.

Onto the game itself; the game remained scoreless until the 85 minute mark passed. David Beckham swung in a trademark corner that David James parried away into the path of newly crowned ‘Footballer of the Year’ Eric Cantona, who within an instant re-positioned himself and drove the ball into the back of the net.

“You don’t win anything with kids,” Alan Hansen said at the start of the 1995/96 season adding to the significance of United’s starting eleven that day.

Liverpool vs Manchester United, 2007 – John O’Shea at the Kop End

The 2006-2007 season saw United and Chelsea neck-and-neck at the top of the table. Liverpool would do all they could to shake our chances of winning the title and with Paul Scholes sent off, it looked as though they would do just that.

When John O’Shea replaced an injured Wayne Rooney, things seemed to be growing worse. The game was nearing its end and a 0-0 draw was on the cards until the most unlikely of heroes popped up with the goods.

Speaking to the press after the game, O’Shea said: “The winner in the 90th minute at Anfield in front of the Kop, Gary Neville has told me that it’s his dream, and I have just gone and done it.”

That very goal was vital in United’s sixteenth league title.

Back in the 80s when Liverpool were the dominant force, these ties were gusty and full of drama. United would raise their game for the tie like Liverpool have done in recent years, both home and away.

Liverpool were on their way to another league title with a massive nine-point gap between first and second. Bryan Robson scored early to put the Reds ahead before the Merseysiders turned things around with goals from Peter Beardsley, Gary Gillespie and Steve McMahon making it 3-1.

These were the formative years of Sir Alex Ferguson’s tenure, who was drumming his winning ways into the squad. United kept fighting as Robson completed a brace and Gordon Strachan got his name on the score-sheet. The final score was 3-3 but we cannot mention the tie without reference to Norman Whiteside’s crunching tackle on McMahon.

Big Norm would describe this today as #scousebusting.

Ole Gunnar Solskjaer always had a knack for scoring important goals in big games, especially whenever used as a substitute. But it’s not all about putting the ball into the Germans’ net for Ole. His goal in the FA Cup Fourth Round against Liverpool was another contribution to our famous treble as the tie was not too long off going to a replay. That was before Solskjaer did what he did best, and that’s making a difference (not for you, Cardiff.)

There was only a few minutes remaining when the “Baby Faced Assassin” netted the winner, leading to an eruption inside the Theatre of Dreams. Liverpool’s assistant manager at the time, Phil Thompson, rushed onto the pitch in an attempt to stab the referee with his giant nose. It wasn’t long before the United faithful chanted “sit down Pinocchio.”

What was to be achieved later that season was imaginable.

I said that I’d leave one of my favourites till last. Imagine yourself playing for Manchester United against Liverpool and you witness a late winner scored. I’m in no position to speak for the rest of you but I could see myself jumping around in a similar fashion.

As a player Gary Neville was hated by Liverpool fans. We sung about how he hated them and this was nothing but an addition to the rivalry. Neville ran half the length of the pitch at Old Trafford to perform a provocative celebration in front of the traveling Liverpool fans. It was a special moment.

Neville was later charged with improper conduct by FA, fined £5,000 and warned about his future conduct. In response, he said: “Are you meant to smile sweetly and jog back to the halfway line? People want footballers to be whiter than white. Do they want a game of robots?”

SN spoke with Paul of The RedMen TV this week in a pre-match conversation.