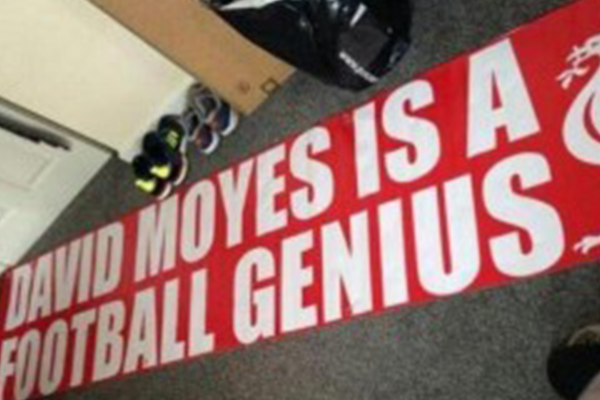 Liverpool blog Paisley Gates has showcased a banner fans have designed ahead of their trip to Old Trafford on March 16.

If confusing the word ‘banter’ with hatred or rivalry wasn’t bad enough, worrying about a team struggling in seventh while you’re in the hunt for this season’s title certainly is. The banner Liverpool fans plan on bringing to Old Trafford ironically states Manchester United manager David Moyes as being a “football genius.”

The article points out how United are currently 12 points behind fourth place City and that our poor form this season has brought joy to their fans. While this is part of football rivalry, I don’t recall lapping it up about a side near mid-table when we were challenging for a league title. Maybe this is what happens when you go so long without doing so…

“Manchester City, who arguably harbour an equal amount of disdain for their more successful neighbours, unveiled a similar banner back in February, taking a pot-shot at the Scottish boss with the same sarcastic moniker bestowed upon him. We’re sure this isn’t the kind of attention Moyes thought he’d be getting when he took over at Old Trafford…”

So copying a an idea from another club is how you roll? Bring out the generic football chants. “We’re by far the greatest team, the world has ever seen…”