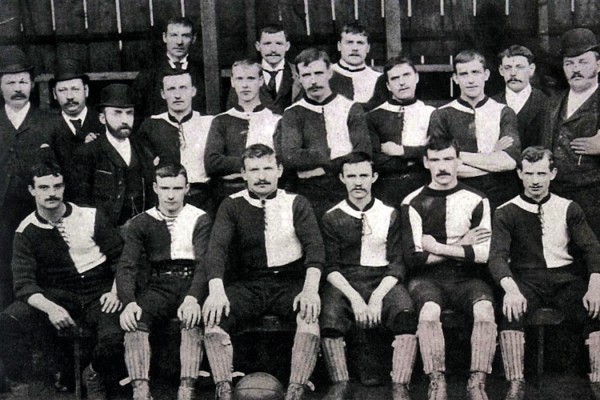 It is said that all great things have to start somewhere, but Manchester United as we know it today, as the biggest club in the world, was in stark contrast to its early history.

Manchester United football club was formed in Newton Heath, a district in the city of Manchester, by workers of a local railway yard in 1878; during this period industry was flourishing in the North-West. At the time, the club was just a way for the workers to participate in their much-loved sport after a day’s labour and matches were arranged against fellow workforces from other departments or establishments.

At this time, what was to become the greatest football club in the world was known as Newton Heath Lancashire and Yorkshire Railway (Newton Heath LYR), matches took place at the North Road Ground. The North Road Ground was said to be a virtual quagmire and players had to change in a local pub just up the road before and after matches, how times have changed.

It’s hard to believe that there was an eight year gap (1886/1887 season) before the team had their first competitive match; a 2-2 draw against Fleetwood Rangers in the first round of the FA Cup in front of a bumper crowd of 2000. Newton Heath were adamant that the match should have been replayed but the officials decided extra time should decide the winner. Newton Heath rebuffed the chance to play the extra thirty minutes and as a result the match was awarded to Fleetwood Rangers.

The 1891/1892 season saw Newton Heath advance to the fourth qualifying round of the FA Cup where they were beaten by Blackpool 4-3. En route to the fourth round, Newton Heath LYR had dished out a 5-1 drubbing of local rivals Manchester City and good news was to follow as the following season the club was finally accepted into the Football League.

On 3rd September 1892, 8,000 expectant spectators witnessed Newton Heath’s inauguration into the Football League; it was a baptism of fire though as Blackburn won the match 4-3. Newton Heath found their opening professional season to be tough going losing four of the opening six fixtures, including a heavy 6-0 defeat at the hands of Everton and the remaining two matches were draws. They were really up against it from this point. On 15th October 1892, Wolves made the trip to the North Round Ground and Newton Heath served up their first win of the season in a spectacular 10 – 1 victory. That demolition job was only short-lived joy as it continued to be a season of woe. The season continued with a number of heavy defeats, and Newton Heath ended the campaign rock bottom with only 6 wins (all at home) out of 30. In the 30 matches, Newton Heath conceded a whopping 85 goals and scored 50.

The first game of the 1893/1894 season was the last home match to be played at North Road and in fitting style Newton Heath saw off local rivals Burnley with a 3-2 victory. The club found a new home at Bank Street situated in Clayton. Despite early signs of promise to the campaign, the 1893/1894 season was largely unsuccessful too: Newton Heath won just 6 games and finished bottom of the pile. Finishing rock bottom this time meant the team would be relegated to the new division 2 for the following campaign.

Newton Heath started to find their feet in the second division and finished the 1894/1895 season in third place behind Bury and Notts County. There were no play offs for promotion, only the champions won promotion at this stage. Newton Heath finished 6th in the 1895/1896 season before achieving their highest finish of 2nd in the 1896/1897 season.

Newton Heath’s last game of the 1901/1902 season was a 2-0 victory over Chesterfield in front of only 2,000 spectators. The team finished the season in 15th and Newton Heath as they were known, ceased to exist.