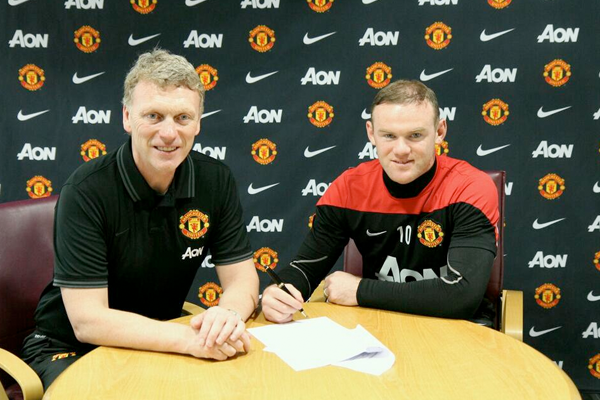 Manchester United have confirmed that Wayne Rooney has signed a four-year deal with the club worth around £300,000 per week.

“I am made up to be staying at United,” Rooney said. “In August I will have been at the club for 10 years and during that time I have played with some fantastic players and won everything that I hoped I would when I first signed. I now have the chance as one of the club’s senior players to help the younger players coming through and to be a part of another great United team. The fans have always been a huge part of this club and the support they have given me since my debut against Fenerbahce has been amazing. I am very grateful to all United fans around the world for their continued support. I am really excited to be a part of the club’s future and want to thank David Moyes and Ed Woodward for their belief and support in me. I am convinced that this is the start of another successful chapter in Manchester United’s history.”

Here is an extract of the first interview Rooney has given since renewing his contract via officialwaynerooney.com. 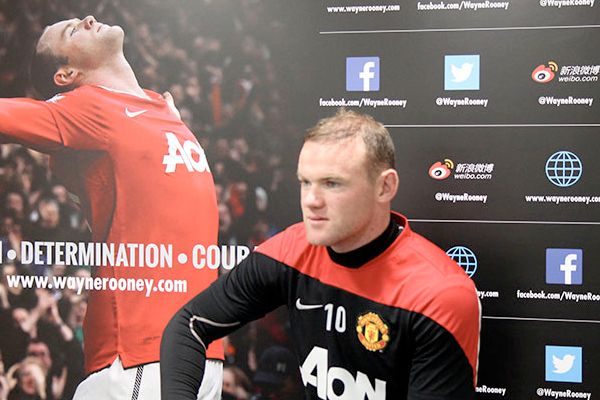 You are currently 4th on the all time leading goal scoring record, this contract gives you the chance to pass Sir Bobby Charlton’s record of 249, was that something that you focused on when deciding to stay?

No it wasn’t a factor in my decision to stay, but I do realize that this contract gives me the opportunity to achieve it.  This is definitely something I would like to achieve and do think about more, if I managed to do it it’d be something I’d be very proud of. My aim is always to score and create as many goals as possible, so if I can continue to score regularly and break the record then I would be delighted.

The future is bright for Manchester United, this is still one of the worlds leading clubs, we have seen this with the signing of Juan Mata in January. People have been saying that we may have trouble attracting the world’s best players but I think the fact Mata came here shows this isn’t true. This is a new era for the club, we have a new management team and a great new manager in David Moyes, there has to be some time for change. We have some great players here and despite our recent form everyone has stuck together and the team spirit is still good, we will continue to work hard and get Manchester United to the top where it belongs.

Negotiations have obviously taken some time to complete and there have been lots of media speculation to what was going on, how do you feel talks went?

Well if you believe everything you read in the papers that’s because I have been demanding to be captain and want an input into the Club’s transfer policy (laughs) which is totally laughable and of course untrue. The talks have taken a while but that’s not unusual, it’s been a difficult time for the club and there has been a lot going on but the talks were positive from the start. There was great belief in me from David Moyes, Ed Woodward and the board, and also the Glazers, this made my decision a lot easier and I would like to thank them for that. My teammates also played a big part in my decision, I’d like to thank them for their support and look forward to working with them. Most importantly the fans have always supported me since I joined the club, through the good times and the bad times. They continued this support whilst the talks have been going on and I can’t thank them enough.

Do you have any message for the fans?

I’d just like to thank them for all their support since I joined the club and want to let them know that I appreciate it, I’m very happy to have signed a new contract and I’m looking forward to sharing many more special moments with them.