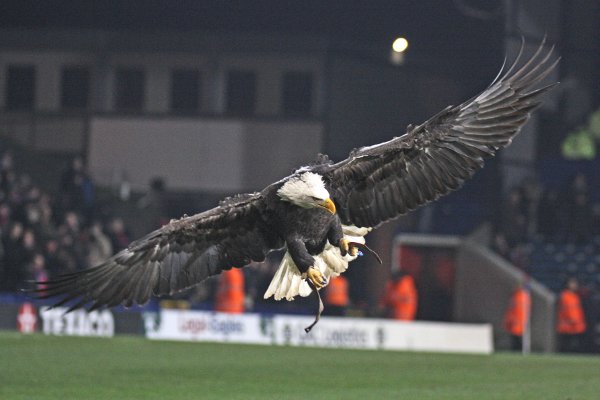 Ahead of the visit to Selhurst Park today, Jonathan Shrager spoke to Crystal Palace fan Jay Crame of The Eagles Beak. Here is how he replied but if you want to follow Jay on Twitter then you can do so here.

JS: How has the season gone so far in your view?

JC: Well, it’s been two completely different stories. The start wasn’t too bad at all, a newly promoted team not being completely outplayed. But we just were no getting any luck whatsoever. Take the penalty in the narrow 1-0 defeat at home to Spurs in the opener and then the phantom penalty at Old Trafford. Everything seemed to conspire against us and Holloway. It effected him more than we thought at the final straw was the home defeat to Fulham. That was the turning point but I still maintain that we were unlucky in that one too. A goal up looking comfortable to being 2-1 down at half time through two absolute wonder goals. That was the end of the Holloway era but the big decision remained and we eventually appointed Pulis. He has been a complete breath of fresh air, instilled the belief back in to the team, organisation and more importantly tactical know how.

JS: Where do you think you will finish this season in the competitions that you remain involved in?

JC: The cup competitions were never a real focus for us. An early exit from the League Cup was perhaps something that no fan shed any tears over. The FA Cup was a little different as Pulis has respect for the competition and put out strong sides but a defeat to the holders Wigan saw an end to that.

Our focus has to be that 17th place. No need for anything more than that. That magic number means survival and as we know, Palace have yet to survive a season in the Premier League and it is perhaps harder now than it ever has been. I admit to saying at the beginning of the season that if we do not manage to survive then it will be the first time such an event would not effect me. Our recent form has changed that somewhat and while it won’t hit me as hard as it has done in the past, I think it will still be hard to take as there are so many teams involved at the bottom end of the table.

JS: Why do you think Holloway struggled after successfully returning you to the Premier League?

JC: I touched on it above a little. Holloway is a very passionate manager, a real character of the game. But for me, that was hiding a few things. He struggled with the tactical side of the game and that much is clear to me now that we have seen what Pulis has down since he arrived. Holloway always manages teams that are attacking, a kind of ‘we will score more that you’ attitude. But he and Palace did not have any luck at the start of the season. a dubious penalty against Spurs, his subsequent touchline ban and fine for his comments after had a lot to do with it. By the time we got to the Fulham home game, two would class goals finished him. He looked jaded and lacked the passion and desire he once had with us. I still cannot put a true finger on the happenings but he looked a little lost, perplexed even at some decisions that had gone against us. I am thankful to him for getting us promoted, it was completely out of the blue. He took over a team in the Championship flying high, a tough thing to do and still do the job and earn us a shot at the big time. But the Premier League is perhaps a step too far for him now.

JS: How do you think Pulis has done since taking the helm and what does the future hold for him at Palace?

JC: Pulis has done a fantastic job since arriving. When you see what he has done to the same group of players that Holloway had at his disposal with several weeks left to go until the transfer window makes it all the more remarkable. We were never particularly leaking goals but we are side that is very hard to beat now even if we don’t score many goals. A real work ethic, the very same that got us promoted in the first place. Building from a strong back line, through a strong midfield up to a very hard working front line. I think the biggest difference however has been tactical knowhow, particularly with substituions and how to make them effectively. It really does make a difference when an opposing team are starting to take a hold in a game and we have seen that on a few occassions since he has been at Selhurst.

Future wise with Pulis is a difficult one. He did an excellent job with Stoke, made them into an established Premier League team, FA Cup final appearance and European competition. Nothing to be sniffed at. All of that would be quite a dream when we consider what position we were in 2010. I think Pulis could be a permanent fixture at Palace for the next few years and he has earned the right even at this early stage to see what he can do for us in the top division. But we all know how fickle football can be, and if we don’t survive this season then perhaps he would be an expensive manager in the Championship.

JS: A certain section of United fans have requested Moyes’ dismissal during recent weeks. Does the success enjoyed by Pulis since his arrival underscore that mid-season transitions can prove successful, thereby partly vindicating the MoyesOut contingent? How do you think United have fared so far since the advent of Moyes?

JC: It’s transition for United and something that the majority of fans perhaps knew was around the corner. Ferguson was given several chances and look where that got you? I like  the fact that United have not made any knee jerk reactions and I do wonder if your former manager just could not face rebuilding a squad which is what it looks very much like Moyes is having to face up to. Yes, he has inheriting a side that are reigning champions but the bar has been raised this season and United have been found wanting. I do think the difficulty will be is if United do not qualify for the Champions League. That is a very tough one indeed. Do the club take the hit this season and build for next? Perhaps so, but they wouldn’t be the first club to have to do so. It’s just been so long that it has been United that have had to do it without Ferguson.

JS: Which Palace player has impressed and which has disappointed this season?

JC: Chamakh. In one word. The rumours in the summer about him joining raised several questions in my mind. But since his first appearance I have been impressed with his attitude and what he has brought to the team. Even more so since Pulis has arrived. Playing the supporting role to the front man, tackling back, running for everything. I thought he was too big for all that kind of hard work being a front man. He has certainly proved a lot of people wrong.

As for disapointed it has to be the Spanish U21 captain Jose Campana. Saw him in pre-season and the buy from Seville in the summer looked very promising indeed. But an early injury and an appearance in the fateful defeat to Fulham hit him hard. Perhaps a flair player that we simply cannot afford. He is on loan to FCN in the Bundesliga until the end of the season but I’d like to see him return to the club. I think he has been unlucky.

JS: If you could choose any three players from the past that played for Palace that you feel would improve the current team, who would they be and why?

JC: We clearly struggle in the goal scoring department so I would have to say Ian Wright. One of the most naturally gifted goal scorers that I have ever witnessed and to see him play for Palace was simply a delight.

Next up I would have to say one of the biggest names to have ever played for Palace, more so in terms of players that I had never expected the club I support to be linked with let alone sign. Attilio Lombardo. An absolute class above and he only played 30 odd games for us but every one of those was a joy. He was a player that when he picked up the ball you knew he would do something with it. The expectation put the crowd on their feet. One of the best players I have seen play for Palace. Often looked far too good to be in a Palace shirt and some of his team mates perhaps confirmed that by not been on the same wavelength a lot of the time.

My final choice is perhaps a surprise and I don’t think that we are particularly lacking in the centre back department but Craig Moore is one of the most accomplished defenders I have seen. The Aussie played for us for a short time but it was enough to know that we were going to miss him immensely.

JS: Who do you think Palace should be concerned about from the United line up and vice versa?

JC: Plenty of players we should be worried about. Rooney, Van Persie and Mata are just three that I think would damage any team in the world. But they will know that they have been in a game at Selhurst and only hope we can contain them.

JS: Your prediction for this one?

JC: I really fancy a draw out of this mainly because this has been an odd season for United and anything goes pretty much! And perhaps things may level out after the ‘phantom’ penalty earlier in the season. Clutching at straws I know but I’m going for a 2-2 entertaining draw.

JS: And finally, tell us a little about yourself and anything that you would like to promote.

JC: My site is theeaglesbeak.com, a fan site which has gone from strength to strength since it started in 2012. We are also on Twitter, Facebook and Instagram. We don’t just provide the Palace fans perspective, we like to delve into some of the more complex issues in the game such as Safe Standing, Season Ticket Prices and No Pyro, No Party. All of those articles are worth checking out for any non-Palace fan.

One response to “A View From The Opposition: Crystal Palace fan”