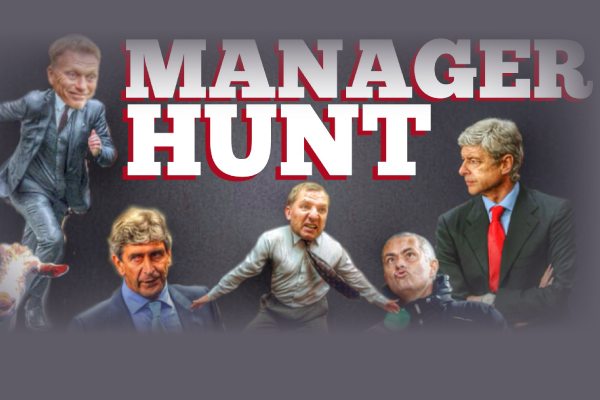 We lose the game but at least I get chance to visit lovely lovely Manchester, the FA Cup in this instance plays second fiddle to the destination. After the game I take a detour to the Theatre of Dreams and sit at the base of the Holy Trinity statue. I sit alone, entrenched in my thoughts with tears streaming down my cheeks.

I spend the morning still with cheeks wet from tears, this time Arsene Wenger has called me silly and disrespectful. I try so hard to make him like me, to make him value me as a friend and a colleague and he always throws it back in my face. How I would love to stand side by side with him, both of us adorning unrealistically long coats with dodgy zips. I resolve to make someone else feel this pain…

I decided to upset Pellegrino again but World Horse welfare has asked me not to compare ourselves to horses anymore. After last time there was hundreds of reported violent attacks against horses in the Stockport area, apparently some City fans they believe my statement to be literal.

Again I decided to upset Pellegrino by claiming Barca are tiny miniature donkeys that play football in lace undergarments but my words were twisted by the media and suddenly I am the bad guy. After training, Ashley comes to see me and while begging for a chance to get back in the team he kisses me tenderly on the cheek, it feels like a thousand hummingbird wings have brushed my very soul. We embrace and I vow to help him get to Brazil.

Why must he attack me again? Benitez claims that I made mistake selling  thingy to my beloved Manchester. Why wouldn’t I do it? When I heard there was a chance I might get to meet Mr Woodward I would have offered him anyone, apart from my Johnny. I just hope that those elegant Glazers understand how helpful I was.

I read today that Fabregas thinks i should ‘shut my mouth’. Well, I think Fabregas should shut his agents mouth and perhaps employ some physically fit young men to thrash him to within an inch of his life. That nasty man made Mr Woodward think his player was going to be gracing the delicately minded green carpet of Old Trafford in the summer. I wish him leprosy and dengue fever. I managed to get over my brief man crush on Ashley by imagining him in an embrace with Ribery. Yuk.

Every Friday is ‘High Jinks with Johnny day’ at training where we let JT do whatever he wants to any of the club staff or family members. This week it was a mild affair, JT made all the players wives parade naked in the gym while he kicked Mikel in the midriff over and over again. Only two reported cases of semen on the exercise bike and three broken ribs for Mikel, we got off lightly.

One response to “Manager Hunt: 7 days with the Special One”