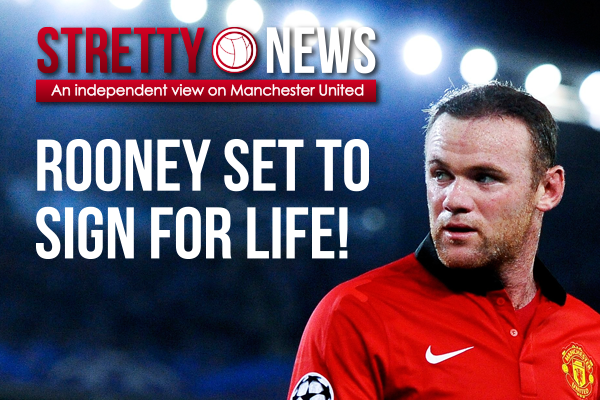 His future has been the subject of intense speculation, ever since the Summer events and the struggles under David Moyes. However, that talk looks set to be finally put to bed, as Wayne Rooney is on the verge of committing himself to United for the remainder of his best footballing years.

The Sun have reported that Wayne Rooney has verbally agreed a bumper 5 and a half year deal worth a reported £300,000 a week. This would make Rooney the highest paid footballer in Premier League history.

Not only would the deal see Rooney go into a decade of service with United, it would reportedly entitle him to the captaincy next season, with the already confirmed departure of current captain Nemanja Vidic, and the highly likely departures of the experienced heads of Patrice Evra and Rio Ferdinand.

This news will not sit easy with some staunch reds, especially after what transpired in 2010 and what may or may not have happened in Sir Alex Ferguson’s final season. For some, the man who seemingly questioned the intentions of the club to be made captain would be unthinkable and hard to pallet. Even though, Rooney has been the only player in our recent history to let player power rule and stand bigger than the club, that is now water under the bridge, he is settled and enjoying his football again, and most importantly, he looks committed.

Rooney is the glaringly obvious standout candidate to take the armband after Nemanja Vidic. David Moyes challenged him to earn a new deal at the start of the season, he has responded in kind, looking sharp, hungry and playing some excellent football. Everyone knew life post-Sir Alex was not going to be a merry-go ride, and 7th place currently reflects that, but the current predicament would have been made a lot worse with Rooney under the slimy mitts of Jose Mourinho, we would be in dire straits without Rooney this season. Simple as. He has led from the front, which is why he is the favourite to lead the team out next season.

David Moyes’ successful attempt to resuscitate Rooney’s United career, which looked in tatters following the bitter end between him and Ferguson, has been one of the undoubted plus points of a difficult season. Moyes has made Rooney a special exception, building a team around him, lavishly praising him at every opportunity which presents itself in the media, constantly highlighting the opportunity to write himself into United folklore by surpassing Sir Bobby Charlton’s goal-scoring record, and apparently making him privy to our summer transfer plans. Rooney must have been suitably impressed with Moyes’ ambition, now would have been as good a time as any to pursue a new challenge given our plight.

However, it looks certain that Rooney’s last lucrative contract will be still at Old Trafford.

News which will be music to our ears, well most of them at least.

One response to “Wayne Rooney set to sign record-breaking deal”