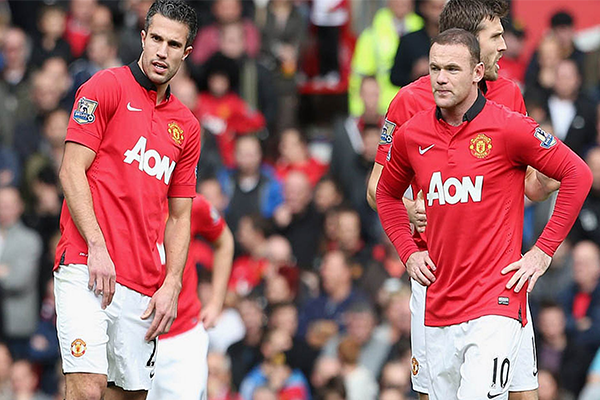 I haven’t the slightest clue what the problem is (well, we all do), but Wayne Rooney is still a red the last time we checked. Understandably so, reds far and wide can comprehend the frustration the squad must feel with the inconsistent performances and “injuries” everyone’s been going through. Especially you, Robin van Persie.

But remember, Fergie is gone. And while he’s certainly brought you into the squad with a purpose last season, you still must uphold the professionalism which all footballers should uphold.

Is Fergie missed? Or have there been whines coming from Carrington about the over-training which has been conducted. Fulham certainly *enjoyed* their spell under Rene Meulensteen, but is it that terrible at Manchester United?

All we ask, from the Stretford End, from America and from the remote bars in Malaysia, is a gentle pass into the feet of Wayne Rooney.

We’ve all made mistakes, including yourself, but we must carry onwards. Had a goal been notched at the Emirates in last week’s encounter, I’d imagine you’d completely ignored Rooney. And we get it.

We all get it – the frustration is setting in, especially as it’s a World Cup year. But Rooney is top notch. As you’ve done quite readily last season for us (and our thanks will never diminish), Rooney’s done the same for us this year while you’ve been out with injury.

Yet again, injuries are injuries, correct? Not exactly. And we all know that.

While a few journalists have reported your agent met with Arsene Wenger on January 28, I denounce any such instance. Yet as Vidic and Manchester United announced their detachment earlier this week, I’d hope you’d provide us with the same respect. A little advanced notice, after you’ve earned a Premier League medal at Old Trafford – under Sir Alex Ferguson.

Some supporters will call you ungrateful, but I will not. You’ve been an asset to the club and a superb professional. However, keep the standard high, even if you’ve fallen out of love with the manager. Even though Rooney’s made it clear he wanted a move to Chelsea, or wherever else, he’s performed. He’s stood on the pitch, head protection and all, and kept up afloat.

Quite rightly, seventh place is unacceptable – and we get that. But give David Moyes a chance.

And I beg of you – reconsider.

Keep calm, and pass to Wayne Rooney because the lad will find you at the back post.

One response to “Note to Robin van Persie”