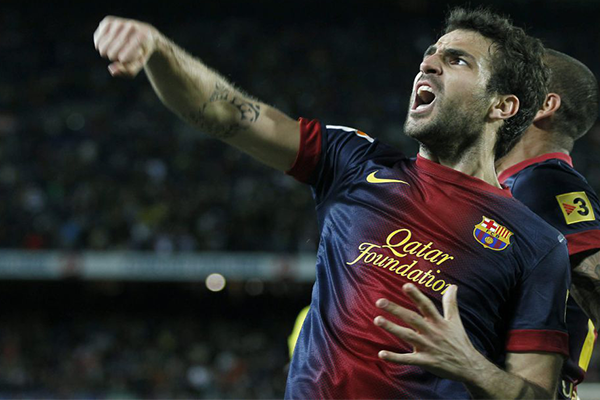 Barcelona midfielder Cesc Fabregas admits he was “flattered” by Manchester United’s interest in him last summer.

“It’s always flattering when a club like Manchester United talks very well about you and you can see they want you. But I’m going through an amazing moment now. I’m playing every week and I feel very important to the team. I’m very happy right now. This season I have felt more like myself, with more freedom and more secure with the way I like to play. It’s not easy when you know you have to convince many fans how good you are and how good you can be for the team. The manager has trusted me and given me what I needed. I’m probably going through my best spell here.”

Since becoming Manchester United boss, Moyes has been in search of a central midfielder due to his side’s mediocrity within the position. Although with the signing of Juan Mata in January, United are still without real class in the centre.

When asked about the Mata transfer, Fabregas mentions how surprised he was to see a player of such quality granted a more to a rival club.

“I was surprised to see Juan move there because I think he has been Chelsea’s best player over the last two years. He’s produced some amazing performances as they won the Champions League, Europa League and FA Cup and he scored in the final of the European Championship with Spain.”

Imagine having both Fabregas and Mata in the same line-up at United? Nah, me neither. The closest we’ll get is watching Spain in Brazil this summer.