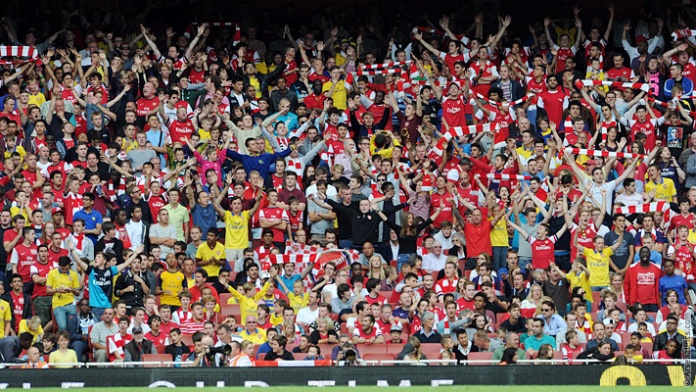 Matt: Since the European Cup final in 2006, supporting Arsenal has sometimes been a joyless experience. Watching us throw away a two-goal lead in the last minutes of a home match against Tottenham in 2008, seeing us lose the Carling Cup final to Birmingham City (especially having taken one of my best mates, who’s a Bluenose) those kind of things just hurt. But the only pain this season has been from pinching myself about our league position. In a way it has annoyed me, because every year I have said we have a team capable of winning the league and every year I’ve supposedly been proved wrong. But this is not a markedly better side in terms of personnel: all that has really changed from bygone years are the tactics and the inner belief and attitude of the players. So if I’m harsh I’d say it’s a little frustrating that we haven’t mounted a credible title challenge for at least three years.

Dale: Who has been your best player?

Matt: There have been so many stand-out performances that it really has to be described as a team effort. Szczesny is arguably the best keeper in the league at the moment. The shuddering failure against Liverpool last weekend notwithstanding, Mertesacker and Koscielny have proved a formidable combination at centre-half — the first as an impenetrable stopper, the second as a highly mobile sweeper — Giroud has led the line manfully all year and Cazorla, Walcott and Ozil have made life very difficult for defences with a kaleidoscope of movement in front of them. The system has really brought the best out of the “defensive” midfielder, whoever that is. Ramsey, Wilshere and, now, Oxlade-Chamberlain have been loving the space they get in front of them to get forward and score and set up goals. It’s just a shame that, as ever, the one table we can be guaranteed to lead all season is the injuries league.

Matt: Without a question the breathtaking opening goal Wilshere got against Norwich at home. It might not have meant much in the grand scheme of things but it was genuinely one of the best I have ever seen. And OK, it was only people like Bassong who stood in front of them but Terry, Cahill and Cech would have been just as helpless with that move coming at them.

Dale: Does the signing of Ozil put to bed the irony of Wenger’s reluctance to sign big players or does Draxler see a return of it?

Matt: Schalke wouldn’t sell. What can you do? I don’t think it’s Wenger’s fault. He’s instructed not to buy by the board who have prioritised paying down debts (although over the years I grant you he has seemed unusually quiescent in this, for whatever reason). The club have just signed some fabulous commercial deals and there’s the new TV money too. There’s only so much cash you can keep in a bank and I know the board realise this. Arsenal will spend big again in the summer, for the right players.

Dale: During the summer there was talk of Fabregas joining United. Would that have been worse than Van Perise?

Matt: No. He’d put a shift in for us, giving us some good moments as he developed. He left Arsenal for his boyhood club, the best club side in the world and, arguably, the best in history at the time. Now he can’t get a game there, at least not as many as he’d like, and he has been casting around for somewhere to go. Arsenal wouldn’t have him (the circumstances of his departure were pretty acrimonious internally). Contrast that with Van Persie, who started 112 games in his seven seasons with us before 2011-12. That’s an average of 16 a season. He was great in the penultimate year of his contract, showing the world what Arsenal had been paying his wages for all that time, and then off he trots to a major rival after dictating to the manager which players he should buy. There are good reasons why there’s no love lost towards him from Arsenal fans, and his absenteeism this season suggests you’re bearing the brunt of him now.

Dale: If you could take one United player, who would it be?

Matt: Janusaj, obviously. Young kid from a football backwater, loads of talent. He’s an Arsenal player in a United shirt. Mind you, so was Ronaldo. Like Ibrahimovic and Zidane these are some of the many that “got away”.

Matt: As a journalist, no. He brought so much to the narrative of English football that his departure has left a void. But as an Arsenal fan naturally I’m cock-a-hoop. What supporter of a rival club wouldn’t be pleased that the driver of the Premier League’s biggest juggernaut has handed over the steering wheel?

Matt: What an impossible task he was handed in taking over from Ferguson. He has gone where Pep Guardiola feared to tread. He did not have the stature or the respect in the dressing room to impose himself immediately, as Guardiola would have, and when results initially went against him the psychological dynamic became even worse. I do think he should have been forceful from the outset in telling Rooney he can’t play in the No.10 position. That is the best position for Rooney but not for United. For me, he should be playing on the left with Kagawa in the hole. That gives you more going forward and means when Rooney is tracking back you still have an out ball. Instead, he tries to build the team around Rooney’s demands and it has made him an enemy of Kagawa, who is a fabulous technician and a redundant asset.

Dale: Arsenal to win the league?

Matt: No. Theo Walcott being injured has really hurt us, and the Liverpool result had been coming. Teams can squeeze us without the fear of his pace in behind. That has forced us to defend too far up the pitch to try and compensate and, just like in the old days, we’re being hit on the break, giving away set pieces and goals as we’re chasing back to defend in desperation. Fortunately I can’t think of anyone in the United team who has the pace of Sterling, Sturridge or Suarez so I don’t anticipate another 5-1 on Wednesday. If I’m wrong on that then here’s a tip: have a bet on a Koscielny red card.

Dale: What did you make of your club’s attempts last summer to sign Suarez in light of his racism, biting and cheating?

Matt: I was one of the few Arsenal fans to be pleased that did not go through. It is hardly The Arsenal Way.