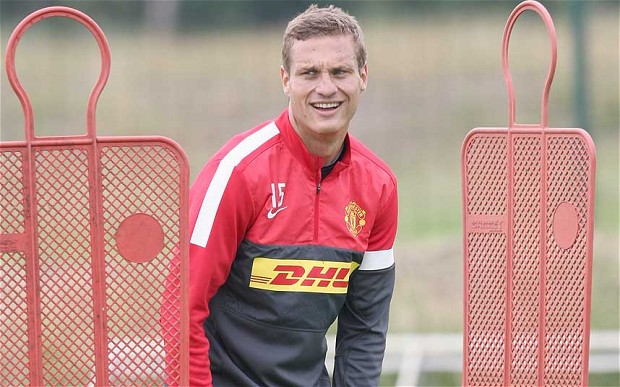 As quickly as the world gasped in Manchester United’s announcement Nemanja Vidic would leave Old Trafford at the end of the season, thoughts spiraled as to whom would retain the captaincy in David Moyes’ squad. While the search for the next captain will not be an easy one for Moyes, a few reds in particular appear at the forefront.

However, replacing the Manchester United centre-back captain who’s been our leader since 2010 may be tougher than imaginable. Left and right Moyes is being criticized for not retaining enough quality players during the two transfer windows he’s been appointed since. Yes, Marouane Fellaini and Juan Mata may be telling signs of intent however, it appears quite apparent Fellaini may need a bit longer to adapt to United’s ever-so-hot engine room. He may even require a few Fergie hair-dryer moments from Moyes as well to sort out his gut.

And while nearly every red is gutted that Vidic is leaving, it’ll now be another defenders time to shine. Vidic and Rio Ferdinand are clearly one of the greatest central defensive pairings Old Trafford has ever seen, but times now bring a changing of the guard. As the back three of he, Ferdinand and Patrice Evra’s careers in Manchester may be limited, those who oppressed the thought of a Vidic-less back line were only suppressing the inevitable.

Nemanja Vidic only has one knee these days. He's lost that terminator look in his eyes. Feels like he's shirked responsibilities #MUFC

The back four needs a complete overhaul. But will Moyes appoint one of the younger lads to retain the captaincy or will a more seasoned red be chosen? With both Jonny Evans and Chris Smalling fast-tracked to becoming the first choice centre-backs, it would appear some of the best captains are defenders.

After loan spells with Sunderland and Royal Antwerp, it was Evans after all who was recalled during the 2008-09 season after Sir Alex Ferguson sold Gerard Pique to Barcelona. The trust in which Ferguson had in Evans was a true testament to his ability as a deputy on defense. Under recent seasons with the constant injury woes which have plagued Vidic, Evans appears to have picked up the pace when given the opportunity especially under Moyes.

While Evans may not be the vocal counterpart to Vidic, he’s gained confidence under the tutelage of the Serb and Ferdinand. The 26-year-old could be quite a solid captain for United as he’s relaxed on defense and emulates Vidic’s style of play in the box – get to the ball at all costs. The terminator look which Vidic sported ever-so brilliantly appears in Evans’ eyes once upon a dream. Should the Belfast native reach deep into his vocal cords and pronounce himself as a United regular, he may have the tools to uphold captaincy with Manchester United.

Love him or hate him, Rooney is quite the player and arguably has been United’s best performer this season apart both Adnan Januzaj and Danny Welbeck. A true work horse all over the pitch, Rooney may have the most amount of tools to snatch the captains armband years ago however, with transfer request he’s tainted his own legacy. If Moyes can look past this, which it appears he’s already done, and the supporters give their utmost praise (which could be fairly easy) he’s primed and ready for the promotion.

Without question Rooney belongs in the discussion of captaincy at the end of the season, but it’s a conversation which no one may be comfortable speaking about. Throw Ryan Giggs, Phil Neville and even Paul Scholes into the conversation and with their blessings, his bicep could see the black “c” on it come this summer.

A midfield consisting of Carrick and Fletcher makes the decision even more confusing. While Fletcher may be the most captain-readied – the reality is he’s not the Fletcher of old. All credit to Fletcher for making a marvelous recovery and should, without question, continue to uphold one of the highest regards within the club. Should it be any of the aforementioned to retain the captaincy, it’d be easy to imagine Fletch throwing on the ( C ) in any of their absences.

Then we have Michael Carrick; the rock in midfield, Mr. Reliable. As United have put themselves under immense pressure this season, Carrick has been a sturdy and steadfast figure when he’s been on the pitch. And while he may not be the creative component in the midfield like Juan Mata is, Carrick understands the know how of Manchester United.

The search begins. Whilst some may be searching for a final at the Maracana this summer, others will have Moyes’ decision on the back of their mind. Pending a superb performance at the World Cup or a workman’s effort in United’s preseason tour in the United States, just about anyone can step up and claim the gloried captaincy that is, Manchester United.