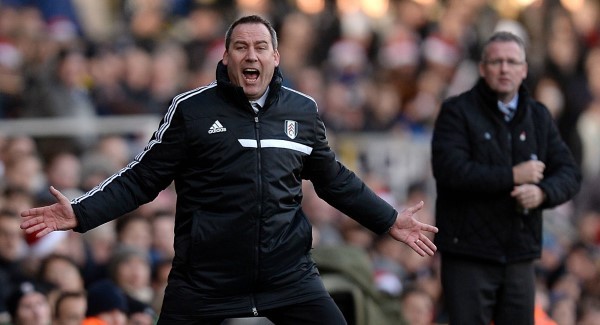 Continuing with our opposition fan previews, James Andrew of The Daily Mail, who once upon a time worked as news editor of the Football League Paper, talks all things Fulham related.

James: Horrible. It started off ok with a win away at Sunderland on the opening day. But it has got worse since then. It is not just this season, we have been very poor for the last 18 months and really Martin Jol should have gone in the summer. But he didn’t, and we have really paid the price. Everyone knows that Fulham’s away form is not great. But this season the home form has really gone as well. We have lost eight games at Craven Cottage this season and a lot of them to teams who are in the bottom half of the table. We go into the game at Old Trafford bottom of the table and that is where we deserve to be. After United, two of the next three games are against Liverpool and Chelsea so we really could be cut adrift quite soon. I think the only hope of Fulham having any chance of staying up is if record signing Konstantinos Mitroglou turns out to be a cross between Cristiano Ronaldo and Lionel Messi. And even then I’m not sure if that will be enough.

Dale: Berbatov left on loan last week for Monaco. How do you rate his time at your club?

James: Mixed. Last season he was very good. He scored 15 goals and played very well in some big games. But this season he was very disappointing. He did not look interested a lot of the time and when you are struggling at the bottom at the bottom of the table you really need all your players to work hard and be up for the fight, and I’m not sure if he was. That said, at times last season it was a privilege to watch him play and for that reason I’m pleased I saw him in a Fulham shirt.

James: I really don’t know. He arrived as Martin Jol’s No 2 with a big reputation following his work with United. But it hasn’t really worked. When Jol was sacked I was not in favour of him being made manager. Ideally we would have brought in a new manager and he could have stayed as No 2. I agree with Martin Samuel in Monday’s Daily Mail where he said: ‘In Meulensteen, Fulham thought they were getting the man behind the man. They weren’t. They were getting Sir Alex Ferguson’s No 2. There was only ever one man and, incredibly, we may not have appreciated just how good he was.’ We seem to be shipping more goals since he was appointed and not scoring any at the other end. If we concede one then you know that more will quickly follow. He does not seem to know his best team, and his short tenure hit rock bottom with Tuesday night’s FA Cup defeat to League One Sheffield United.

James: I probably go against most Fulham fans here and say ‘Nay’. When the takeover was announced a fellow journalist, who spends a lot of time covering the NFL, told me that Fulham would be relegated within three years of Khan taking over – as things stand it will happen in one. He used the Jacksonville Jaguars as an example and how Khan has not really invested in the playing side of the club and warned that it would be the same at Fulham. To be fair, he did make a club record signing in January when he spent upwards of £12million on Konstantinos Mitroglou, but I’m sure there is a decent release clause in his contract should we go down. But I am not sure what his motives are and what he wants from the club. I don’t need to tell Manchester United fans that just because someone from America comes waving a chequebook that it is necessarily good news.

James: It would have to be the 3-1 win at Old Trafford in 2003. We were doing well under Chris Coleman and on that day everything seemed to go right. Lee Clark got an early goal and then Diego Forlan levelled before half time. But Steed Malbranque and Junichi Inamoto both scored to give Fulham a win I’ll never forget. The game in the FA Cup in 1999 was a good memory, despite the fact we lost, just because we were in Division Two at the time and to play United at Old Trafford was a great experience. And also our first game in the Premier League in 2001 when we took the lead twice through Louis Saha but lost 3-2 was also memorable just for the fact that we were in the Premier League. There have been plenty of games I wish to forget as well!

Dale: Thoughts on David Moyes and United this season?

James: I think everyone knew that whoever replaced Sir Alex Ferguson was going to find it tough. But I’m not sure if anyone thought it would be this tough. David Moyes is a good manager. But it is taking time to adjust. I am surprised at the league position. There was a great opportunity in League Cup to win some silverware and I was surprised how the second leg against Sunderland panned out. I don’t want to sound patronising, but there will be a lot of fans who have only known success supporting United. And so they are now finding out what every other football fan in the land has to go though when things aren’t going well. It is a test for Moyes and it is a test for the fans. But I’m sure it will come right eventually – who knows you might put a run together and win the Champions League!

Dale: If you could take one player from our squad, who would it be?

James: At the moment I would take any United player as I am sure whoever it is would improve this Fulham side. But if it was just one then it would have to be Wayne Rooney. Both Robin van Persie and Juan Mata are excellent players, but Rooney is pure class. He has had his ups and downs, but when he is on form he can be unstoppable. From a selfish point of view I hope he has a good end to the season (after Sunday) and goes to the World Cup in top form.

James: Well, according to Meulensteen we have to win half of our remaining games. So why not start at Old Trafford? I’ll go for Fulham 1-0 (Realistically though it will probably be 5-0 to United).