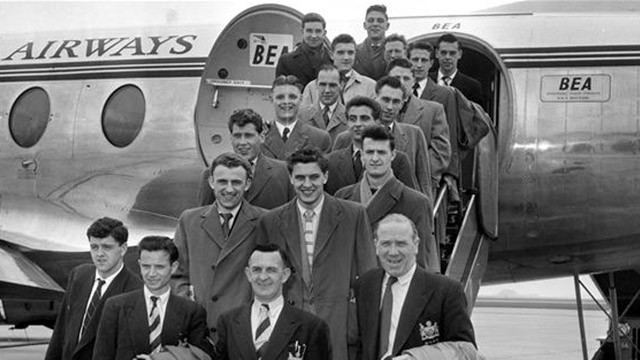 Picture the scene. It’s 1945. Britain is reeling after scores of casualties following the war effort. Football has been on the back-burner for virtually six years, due to players being forced to sign up for the cause, putting their lives on the line for things bigger than football. Players and fans alike were relieved at normality being restored, football was back.

What was to follow from a United perspective was simply breathtaking.

A visionary, who went by the name of Matt Busby, was to leave a lasting legacy that has become the blueprint and the very DNA that our great club has right to its very core even to this day.

Busby’s vision and ultimate goal was one that had never previously been entertained, His notion of recruiting the best possible youngsters, even when they were still getting an education, set the benchmark for stellar youth recruitment and arguably changed the dynamic of team policy as a whole.

The privileged select, who Busby identified as the future of Manchester United, were about to receive an entirely different education, away from the academic sphere.

By all accounts, Busby’s philosophy centered around creative freedom, liberty, expression and most importantly enjoyment. This was Busby’s artistry, knowing that young players shouldn’t be too caught up in over-complicated tactical so-called master-plans, he simply left them to what they knew best, giving them a football and showing their talent.

This was reflected with almost immediate success on the field, with United winning the FA Youth Cup for five successive years, since the competition’s inauguration in 1952.

Busby oversaw a radical changing of the guard, something which would seemingly not go amiss today under David Moyes, dispensing with the older players who have previously enjoyed success under Busby in the shape of the 1948 FA Cup triumph. After the war effort, in which most of these older players put their bodies on the line, Busby felt that the team needed freshening up, their cycle was up. It was time to put his vision into place.

This, in essence, was the beginning of the Busby Babes. Busby’s faith in blooding the youngsters was vindicated by two Championships with a squad with barely an average age of 22.

Word was getting out that Busby was on the cusp of something spectacular. It was not solely domestically where Busby was getting envious looks, on the European stage, he led United to a thumping 10-0 victory over Anderlecht, played at Maine Road due to Old Trafford being damaged, which is still to this day our record win.

Busby knew what he was getting from youth, a hunger, willingness to learn, fearless mentality, and creative expression. This team was not burdened by previous heartaches or narrow misses, they were playing in a manner that belied their tender ages. Those fortunate to take in this period must have been on the edge of their seats for virtually 90 minutes.

Football as a whole was to be devastated by the terrible events of February 6th 1958. United were returning from a European match in Belgrade, against Red Star Belgrade. After two aborted take-off attempts, the pilots tried a third time, out of fear of getting too behind schedule, the consequences were devastating.

But for that third take off, Busby’s Babes were surely destined for greatness and were seen by many as untouchable at the time. This encapsulates why the taking of this previously unseen footballing brand left the nation and also rival supporters in mourning.

Busby’s legacy will never be forgotten or lost from any of our fans. Generations young and old on match-day have the privilege of taking in lasting memories thanks to the commemorative Munich Tunnel beside the South Stand. These precious memories outside Old Trafford essentially mean that the Babes are immortalised. You hear it a lot from new signings, academy players, the staff, everyone associated with our great club, that the lure of United is epitomised best by our distinguished history. The Busby Babes was one of the first chapters in our amazing story.

If you get a moment today, just pause and reflect for a minute about where our great club would be today without the guidance and vision of Sir Matt Busby.

Busby had his last rites recited to him on more than one occasion in Munich, but his vision was not going to be unfinished by disaster. He defied the odds and came back against all the odds to steer United to a European Cup just ten years later. Simply remarkable.

This legendary never-say-die attitude that has stood the test of time and has been passed down to future generations can firstly be attributed to Busby.

‘United will go on… the club has a duty to the public and a duty to football. We shall carry on even if it means we are heavily defeated’.

‘Although we mourn our dead and grieve for our wounded, we believe that our great days are not done for us. The road back may be long and hard but with the memory of those who died at Munich, of their stirring achievements and wonderful sportsmanship ever with us’.

So, Lest we forget… The flowers of Manchester, the Busby Babes.

You will never be forgotten, you are the Flowers of Manchester. You were the Busby Babes.