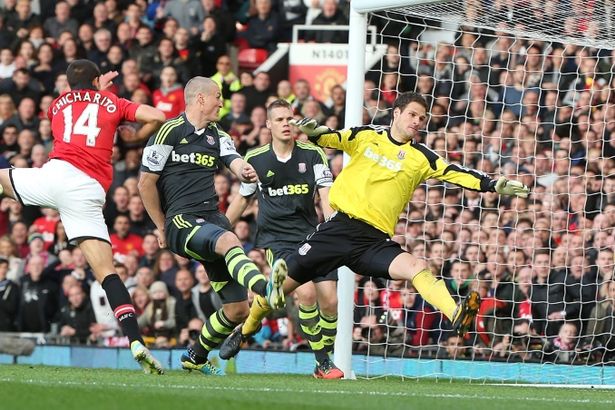 David Moyes will have all of his main stars to call upon when Manchester United travel to Stoke City’s Britannia Stadium this Saturday.

Juan Mata made his club debut on Tuesday night against Cardiff City, a game in which Robin van Persie returned from injury with an opening goal and Wayne Rooney featured off the bench.

Whether Moyes will go all out and let go out of the hand break by starting Rooney, Van Persie, Mata and young starlet Adnan Januzaj remains to be seen. Danny Welbeck, who rested for the 2-0 win over Cardiff, gives the manager another option.

With Michael Carrick and Marouane Fellaini both absent through injury, Phil Jones will most likely provide the grit needed against Stoke in midfield, although Moyes could also select Darren Fletcher for his control and urgency. Giggs starting mid-week may be replaced by Tom Cleverley.

The first time Mark Hughes’ side faced United this season, Moyes saw his first comeback as manager of the champions with Hernandez popping up in the final minutes with the all important winner.

Hopefully it’s three points again without the drama. That day did not do my heart any good.