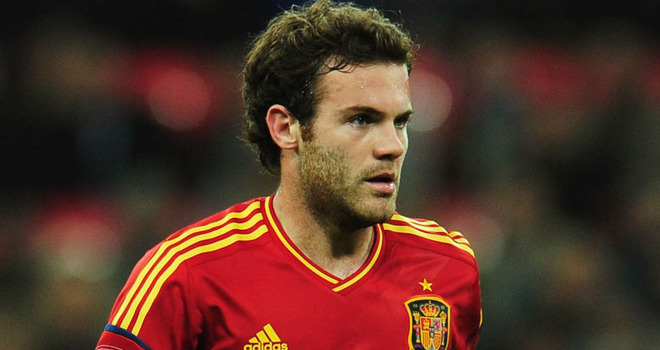 Juan Mata joined very exclusive company last week by becoming only the fourth ever Spaniard to wear the United shirt. This number may appear surprising, especially given the number of foreign signings we have made over the years.

So here they are, the quatro Españoles to wear the mighty red.

The first one to play under the Old Trafford lights was probably the most difficult to remember. Who remembers Ricardo Lopez Felipe? Ricardo joined United in 2002 for £1.5M to provide cover for Fabien Barthez and Roy Carroll. Ricardo’s time in Manchester was short-lived, only making one Premier League appearance, during which he conceded and saved a penalty against Blackburn. He then took in a loan spell at Racing Santander and was subsequently sold to Osasuna.

The next one was Gerard Pique, who we probably let slip through the net. You may be surprised to read Pique only made 12 league appearances over four years, it is pretty staggering when we see what he has gone onto achieve at Barcelona and with Spain. Pique was always going to go to Barcelona, his boyhood club, once they registered an interesting, especially at a time when Nemanja Vidic and Rio Ferdinand were playing the best football of their careers and would be unmoved as a partnership. Pique never really acclimatized to the physical demands of English football, a game that sticks in the memory was a 1-0 defeat at the Reebok where Kevin Davies dominated him. SAF saying it was one of his hardest ever decisions to sell Pique has been vindicated by his honours list and feats for club and country.

David de Gea was the only candidate in Sir Alex Ferguson’s eyes to replace Edwin Van Der Sar. De Gea endured a difficult opening campaign, not helped by two major blunders in his first two games and question marks about his aerial ability and command of the area. He responded in some style last season, statistically he was the best keeper in the league as we romped to the title. His transformation from lightweight to a more imposing keeper has been in evidence ever since the start of last season. We have one of the best keepers on our hands, and no doubt he will go onto be one of the world’s best and surely a permanent member of the Spanish national team.

Surely no-one could have foreseen Robin Van Persie in a United shirt, let alone the coup of Juan Mata last week. Seeing the little Spaniard in red is and will be surreal for a while to come. Looked very neat, tidy and creative, if not a tad rusty in his league debut for the reds against Cardiff. He is going to be a tremendous player for United and a key asset in our quest for the top 4 this season and hopefully bigger things in the years to come.