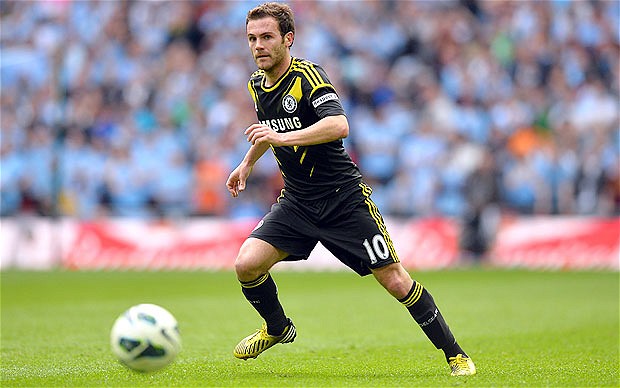 The signing of Juan Mata from Chelsea has been one that has led many to claim the ‘United philosophy’ of operating with genuine width is changing.

Even before a helicopter had landed, supporters were wondering where the Spaniard will fit in when we (eventually) have a full compliment of attacking options in the shape of Rooney and Robin. Mata may not be an out and out winger but such players are rare in today’s game. This has led many to assume that he will be used as a number 10 (a phrase that confuses me because whenever someone says ‘number 10 role’, I think of Ruud or Sparky!).

Mata’s attacking ability is best illustrated by his back to back player of the year accolades at his now former club Chelsea and whilst he may have fallen out of favour with Mourinho this season and found himself sat on the bench, that is not a reason to suddenly question whether he is good enough for United. I’d argue that all it means is that he wasn’t physically big enough for Chelsea.

Jose’s teams have always been ones of powerhouses balanced with attacking guile and it seemed that Eden Hazard’s shoulder barge being stronger than Mata’s saw him get the nod. For all of the diminutive midfielder, Luka Modric’s play in knocking United out the Champions League last year, it’s worth noting that he, like Mata has had to do this season, started the game on the bench with the Portugese manager opting for Khedira instead. That’s how Mourinho sets his side up, he even quipped that Schwarzer’s six foot plus frame could have seen him play centre midfield over Christmas with Mikel missing through injury.

So Mata has done nothing necessarily wrong this season and whilst some may baulk at the price, it’s a player who should be one of the freshest in the league due to his lack of match action as well as one of the divisions most talented.

And now David Moyes must ask himself where to use his latest acquisition. For me, left hand side. I firmly believe that from now until May, that will be his position. Januzaj has carried the hopes of supporters for too long and as he begins to fill his frame, it would be stupid to continue using him in every minute of every game like we do at present and risk injuries hampering his progress. The boy needs a break and Mata is a great reason to sit Adnan next to Ryan Giggs on the bench and gain some valuable education from our Welsh player-coach.

Thoughts then turn to next season, largely because of the wish to get this wretched campaign over and done with (although there’s plenty more ‘fun’ to be had before this season ends); and how do you fit Mata, Rooney, Van Persie and Januzaj into the same team.

The World Cup will play a pivotal role. Not because of signings for our midfield (though you’d expect at least one) but because of a change in mindset once it has passed. When Rooney complained last season of how we used him in midfield, I always felt that when the scouser said ‘midfield’ he was really saying ‘left wing’. This is a different complaint to being used in a central role and even in his body language and, crucially, his performance; there was a marked difference to his toiling at the Bernabeau to his thriving at Newcastle and Stoke.

As supporters, it drives us mad, but players (especially at Rooney’s age) have one eye on the World Cup. Look at United’s record of titles in a World Cup year when the majority of their squad are up for national selection. Whilst we may see the tournament as a distraction, players still view it as the pinnacle. As such, Rooney wasn’t going to allow himself to be used on the periphery of United’s attack and then be used as a focal point for England in Brazil having perhaps only managed a handful of goals from a chance every other game this season.
He’s got his wish. Moyes has invigorated him and managed to help him produce excellent performances up front. You just feel that, once the World Cup has passed by, it will be time for Rooney to do Moyes a favour. He will be asked to be our centre midfielder. I think he’ll do it too. It’s even a role he may need to adopt for country when the inevitable round of retirements for Lampard, Barry, Gerrard and Carrick are announced.

Suddenly, it starts to look a simpler, more balanced equation. Taking your pick of whether Mata or Januzaj lines up behind Van Persie, the other starting on the left hand side. Rooney in the middle pulling the strings next to Carrick or Feillani with whoever partners Rooney given the clear instructions of ‘win it back and give it to Wayne/Adnan/Juan/Robin’.

The right hand side, despite whatever ‘new philosophy’ columnists are predicting will still be filled with a winger.

Over at the Etihad, the balance of a flying winger in Navas being complimented by the roaming Silva has catapulted City’s challenge for honours. If United were really in for Bale and Ronaldo over the summer as we’re led to believe then it suggests that Moyes is still looking for that out and out wide player.

It will be interesting over then coming weeks and months what happens with tactics and the inevitable comings and goings that will occur in the summer (I think that is us done for this window). The thought of the choice of how to accommodate Mata is certainly a better debate than where to get rid of some of the current playing staff! More is needed of course, but what Moyes is doing might not necessarily be a change of philosophy, but simply a changing of the guard from Scholes to Rooney, Vidic to Evans, Giggs to Januzaj…