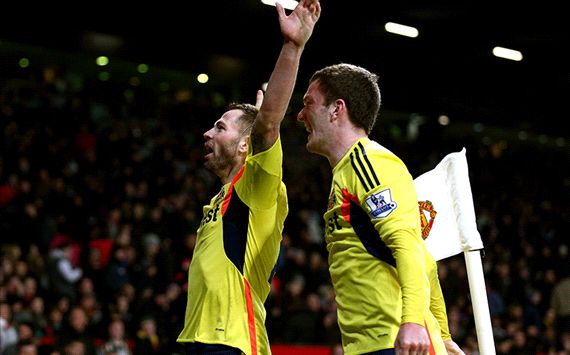 David De Gea – Spectator for much of the night but blundered horrendously for Phil Bardsley’s 118th minute goal. Shootout saves not enough. 6

Jonny Evans – Looked solid and opened the scoring with a well-taken header. 7

Michael Carrick – Kept possession but without being too incisive, went off with injury. 6

Darren Fletcher – Composed and offered energy in midfield, hit the post and scored our only penalty. 7

Danny Welbeck – His sliced effort fell to Evans to score, didn’t really carry on his recent form, always provided an outlet regardless. 6

Chicharito – Always a threat with his movement and pace, took the game to penalties with virtually the last kick. But why did he not take a penalty? Even if he had cramp… 7

Antonio Valencia – Looked dangerous with his pace and strength but his crossing was still AWOL. 6

Phil Jones – No real time to make an impact, dreadful penalty to cap it off. 5