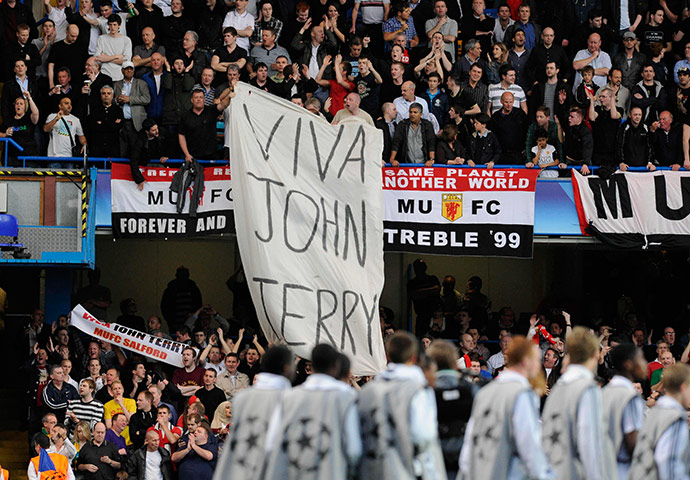 It’s become tradition that we get Chelsea fan Aidan Sweeney on to answer questions on behalf of the We Ain’t Got No History blog. This time he speaks about Mourinho’s dull at times football, not being arsed about a Rooney transfer and his disgust at Mata’s treatment.

Are you happy with how Chelsea have performed since Mourinho’s return?

Well the football has been mind-numbingly dull at times but the results are coming and it’s starting to look like we’ve got a pretty decent team here. Mourinho has been focusing on getting the defensive side of the team sorted and I reckon that now it seems to be sorted, we may see Chelsea hammer a team or two in the coming weeks.

What do you expect to see from now till May?

I have absolutely no idea who’s going to win the title but Chelsea are going to be up there come May. I think it will be either us or City but Arsenal just won’t go away and it’s starting to get quite annoying. Regarding Europe, I don’t think this team is quite ready to win the big one but with Mourinho in charge, who knows?

Who do you think has been your most important player this season?

Eden Hazard has been sublime. He’s starting to chip in with magical moments every game, instead of every other game like last season. Terry has been quality at the back as well. Quite funny how Benitez said he couldn’t play every game last season yet he’s played most games this season and hasn’t had a bad game yet. Would comfortably get in England’s XI this summer and his partnership with Cahill is look decent, shame really.

Not arsed to be honest. Admittedly Torres, Eto’o and Ba are all terrible but weirdly even they seem to be chipping in with a a few goals now. Strikers scoring goals, we haven’t had that down here in quite a few seasons. What we’ve got is good enough for what we can achieve this season and next season, Lukaku will surely be back at the club and ready to go. Considering no one likes Chelsea again, I guess Rooney would be the perfect fit but nah, not for me. His whole ‘angry and confused’ act was just appalling, he’s a grown man who should grow a pair and make a decision so United can ship him off the Spain or something. I’m amazed that he’s still so well received by you lot.

Thoughts on how Mourinho has dealt with Mata?

I’d like to sit here and express my disgust at Mata’s treatment but I just can’t. Mata is by far my favourite player because he’s just a wonderful footballer and a wonderful human being but, Chelsea have looked a better unit when he hasn’t been on the pitch. His reaction when he was substituted at Southampton was heartbreaking and I think less of Mourinho for the way he’s treated Mata but it’s a results business and he’s getting the results without Mata. Mourinho has to find a way of fitting Mata into Chelsea’s best XI, he’s too good of a player to be sitting on the bench and he clearly loves London and the club so I hope he wouldn’t leave. It’s a tough one, I absolutely adore Juan Mata but it’s hard to complain when Chelsea are winning.

Judging on how we’ve played this season which player would you take from Old Trafford to Stamford Bridge?

Rooney and that’s only if I had to take someone. If everyone was firing on all cylinders but it would obviously be RvP as he’s your only world class player. Your player of the year awards should be pretty funny, does anyone actually deserve it?

I feel really sorry for him. He’s mental for even taking the job but who wouldn’t take a challenging job to better themselves in any profession? I would be enjoying this all a lot more if SAF was still in charge but at least Moyes is doing it his way. If he fails then at least he’s tried his own way, rather than keeping all of SAF’s staff and trying to just be a clone of SAF. I hope it works out for him but not just yet.

I have a dodgy feeling about this one. Things are going so wrong for United at the moment, it wouldn’t surprise me if something miraculous happened and you won 1-0 with a Tom Cleverly screamer. Seriously though, 3-1 Chelsea.