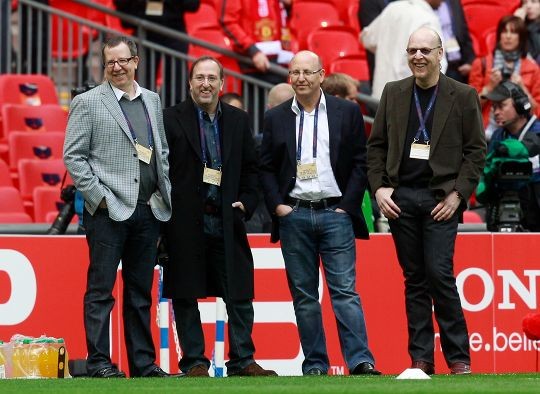 (Warning: this is an article about the Glazers and finance that will make almost no mention of the ruinous debt the Glazers have saddled Manchester United Football Club with.  It is assumed that any reader has at least a basic understanding of the issues relating to that debt, but if not, much has already been written about those issues and can be found easily by a quick internet search.)

I was asking myself the other day: “Why are the Glazers still hanging around?”

The Glazer family clearly have no natural affinity for the Beautiful Game or for the great club that is Manchester United Football Club.  It’s blindingly obvious that the Glazers are squatting in our club for the sole purpose of enriching themselves.

But as clear as that proposition is, given the recent travails in Manchester United’s share price, with headlines like “220 million pounds wiped off United’s value in December”, I did wonder whether what had for about 8 years seemed one of the most risk-free punts in global sports industry investment had changed significantly enough for the Glazers to begin thinking about selling out.  And that thought process led me to wonder how their journey so far has treated them, why the heck they were still even here, and where they might go from here.

The Glazers acquired effective control of MUFC around 16 May 2005 when the family acquired 75% of the shares in the PLC.  That allowed the family to delist the PLC from the London Stock Exchange, and to start the process of buying out the remaining 25% of the shareholders.  The valuation of the club at the time of the acquisition was approximately 800 million pounds, or US$1.5 billion using the then-current exchange rate.  By way of comparison, the S&P500 share index (for the uninitiated, an indicator of the value of a broad basket of US listed shares) on 16 May 2005 was 1,165.69.  This latter number is not particularly meaningful, by the way, but will be useful as a benchmark.

Let’s be very slightly generous and estimate the increase in the value of the club over the last 8 and a half odd years at US$1 billion.  When compared to the initial investment value of US$1.5 billion, that’s a return of 67%.

What does that mean?  It means that the Glazers have made more money by owning MUFC than they would have made if in May 2005 they had instead bought an average portfolio of US companies.  They have outperformed the stock market, and given the inherent riskiness of owning a sports club relative to other types of companies, that’s actually a very remarkable achievement.  It certainly does explain why the Glazers have held onto their investment for so long – it’s been more profitable for them to hang onto MUFC than to sell out and reinvest their ill-gotten gains elsewhere.

However, while this is a reasonable depiction of their overall ownership and investment return, I think it’s useful to break their ownership period down into two periods.

The first relevant period is the period marked by the management of the club by Sir Alex Ferguson, in relation to on-pitch matters, and David Gill, in the executive offices. Both were in their respective positions when the Glazers took over, and while it’s debatable exactly when the market judged that period to have ended, we either use 8 May 2013 (the day it was officially confirmed that Sir Alex would be retiring) or 30 June 2013 (being Sir Alex’s official final day as manager of MUFC).

The highest value that MUFC (or, to use its official NY Stock Exchange ticker symbol, MANU) shares have been valued at during the listing period is US$19.34 on 8 February 2013. On that date, the club was valued at approximately US$3.2 billion – based on the initial investment value of US$1.5 billion, that’s a return on investment of an astounding 113%.

By comparison, the S&P500 index was worth 1,517.93 – in other words, while MUFC had increased in value by 113%, over the same time the US stock market had in effect only grown by 30%. That’s an investment overperformance of 83%, which is frankly incredible.

Stock market investors don’t particularly care about success in football competitions, but they do care about revenues, and it’s clear that MUFC revenues were driven by a combination of on-pitch success (delivered by Sir Alex), prudent financial management (supervised by Gill) and, in fairness, an aggressive and voracious drive in growth in commercial revenues (spearheaded by Ed Woodward, now Executive Vice-Chairman of MUFC and effectively the chief executive, and Richard Arnold, the current Group Managing Director). Sir Alex is obviously the only one of those club personnel that the average fan cares about, but it would be unfair to attribute the commercial success of the club solely to him – it has been delivered by the entire team, whose work has depended on each other. Sir Alex delivered success on the pitch, which made it easier for Woodward and Arnold to sell the club to potential commercial partners and sponsors such as Aon, Chevrolet, Aeroflot and so forth. Meanwhile Gill supervised the financial aspect of the club, negotiated contracts and transfers, and generally kept the off-pitch matters ticking over.

(In fairness, MUFC has also benefited greatly from television rights deals that were negotiated on its behalf by Premier League chief executive Richard Scudamore, and by the commercial team at UEFA that negotiate the rights deals for Champions League television deals. Hence, not all of the credit for the increase in MUFC’s value is down to the MUFC executive team.)

At any rate, during the time that MUFC’s management “dream team” was in place, it was very apparent why the Glazers were hanging onto the club. They controlled one of the biggest sports entities in the world (by way of comparison, the most valuable NFL franchise is the Dallas Cowboys, which was valued at US$2.3 billion by the business magazine Forbes in August 2013), with all the prestige that entails, and even if they had sold the club, finding something else as profitable to invest in would not have been simple.

It’s interesting to ask why the MUFC share price peaked in early February 2013. Frankly, it’s impossible to say. It may be that investors realised that the euphoria of being domestic champions-elect with four months of the Premier League season had led them to go overboard in valuing the club, and then reality struck – bear in mind that the club’s 2nd quarter/1st half financial results for 2012-13 were released around that time, and it may be that investors who had been fired up by their view of the club’s growth prospects reassessed those beliefs after reviewing the actual financial results and factoring in the information contained therein.

(2) Sir Alex wins the Premier League title, then retires – February to May 2013

For whatever reason, the MUFC stock price drifted downwards throughout February and March 2013, before starting to tick back up in early April 2013. The stock price hit a low of US$16.19 on 3 April 2013 but by 6 May 2013 had recovered to US$18.52 per share. It’s likely that some confidence in the stock had been restored by the release of the 3rd quarter financial results, with MUFC executives holding a regularly scheduled conference call with investors to discuss the financials on 2 May 2013.

The football world was rocked on 7 May 2013 by rumours that Sir Alex Ferguson was considering retiring from his position as manager of MUFC. The stock price was completely unmoved by these rumours, and in fact closed up US$0.25 per share at US$18.75 per share, in defiance of any reasonable expectations. However, it may be that investors were awaiting confirmation of the rumours as after Sir Alex and the club officially confirmed on 8 May 2013 that he would indeed be retiring, the share price dropped by US$0.33 per share to US$18.44 per share.

MUFC moved quickly to prevent any perception of a vacuum at the top, and only a day after announcing that Sir Alex would be retiring, the club announced to the NY Stock Exchange on Thursday 9 May 2013 that it had identified its chosen successor: David Moyes.

While David Moyes was officially to start in his role as MUFC manager on 1 July 2013, as far as investors were concerned they were assessing the value of the club from the time that he was officially confirmed in that role. That date was 9 May 2013. On that day, the stock dropped a further US$0.42 per share to US$18.02 per share. Based on that share price, the club was valued at approximately US$2.94 billion.

For reference purposes, the broader US S&P500 index on that date was valued at 1,626.67 – that figure by itself is fairly meaningless but again serves as a benchmark.

All readers will be aware of the ups and downs of the first period of David Moyes’ tenure as MUFC manager, so there is no need to go into them here. From a financial standpoint, let’s fast forward to the last NYSE trading day at the time of this article, being 8 January 2014. On that date, the MUFC share price closed at US$15.15 per share, valuing the club at US$2.48 billion. Meanwhile, the S&P500 index closed at 1,837.49.

What does this all mean? Firstly, the post-Ferguson/Gill era of ownership for the Glazers has been marked by a reduction in the value of their investment in MUFC of approximately half a billion dollars. (Ironically, that’s roughly the amount of debt they scandalously injected into the club when they bought it, but this article isn’t about the debt!) That’s a negative return (ie a loss) on their investment during 7 months of about minus 15%.

Bear in mind that over the first 8 years of their ownership, the Glazers made a peak of 113% on their investment. Using simple averaging (compounding would be more accurate I’m too lazy to work out the compound return), that’s about 14% growth a year.

In the half year or so since Sir Alex and Gill have retired, the Glazers have already “lost” on paper approximately the same amount as they’ve made each year of their ownership.

Moreover, if they’d sold the club for US$2.94bn on the day that David Moyes was confirmed as MUFC manager, and reinvested the sales proceeds in the US stock market, they would’ve made an additional US$380m in profit.

From an opportunity cost basis (ie taking into account both the paper loss they’ve made on their MUFC shares, and the profit they could’ve made but didn’t if they’d invested in the US stock market instead) the Glazers have basically missed out on something like US$800 million of lost potential profits. In seven months.

Have a look at this diagram, which shows the performance of both MUFC shares (shown as MANU in blue) and the broader US stock market, being proxied by the S&P500 index (in red) – I’ve graphed the performance over the entire period that MUFC has been listed on the NYSE, ie from August 2012 (and before you ask, I couldn’t figure out how to show MUFC/MANU in red – sorry about that!):

3 responses to “The Glazers: Things have changed”