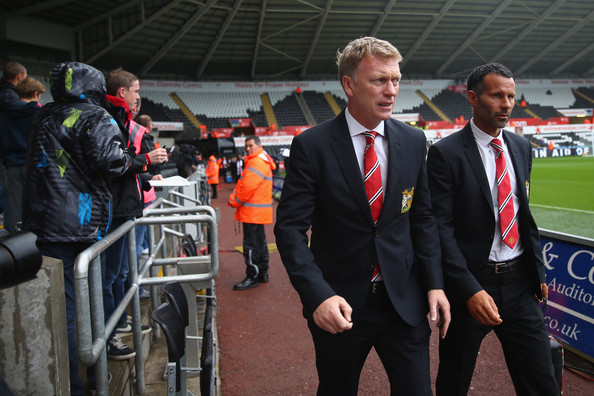 Manchester United manager David Moyes: “It is difficult, we just need to keep going. We didn’t do a lot wrong. I thought the referee was going to blow in our direction for the first goal. I couldn’t believe he gave a free kick. It was a terrible decision. We are all just laughing at them at the minute. We get a player booked for doing the same. It looks as though we are having to play them [officials] as well as the opposition at the moment. I thought the players, our crowd were unbelievable, the players deserved to get a result. It’s a two legged game and I am really looking forward to the second leg.”

Another game, another defeat, this time against the worst team in the Premier League in the only competition we have the slightest chance of winning. Three defeats in a row for the first time since 2001, when all three were dead rubbers, the title already won. Three defeats in a week for the first time since 1992. But the anger inside me has gone. All that’s left is an overwhelming sadness at what the team and the club has become. There are no easy answers from here, no path to a quick resurrection and likely no will from the powers that be to take the decisions that need to be made. We are left with a husk. So many reasons to be sad:

Sad to see a team of serial winners so devoid of confidence or belief that simple passes go astray, balls otherwise cushioned without a thought bouncing underneath and over feet. To see abject performance after abject performance and be slowly less and less hurt by each one.

Sad to see a team so devoid of creativity, imagination, tempo and, perhaps most importantly, joy.

Sad that watching United now feels like it’s going to be a chore, something you do out of devotion, not enjoyment. This is not a conscious shift. It creeps up on you over time, as does the acceptance of mediocrity.

Sad to see an 18-year-old continue to be the outstanding footballer in the team, the only individual with top class touch, drive, imagination and sheer class. But so grateful that we, at least, have him.

Sad to see a 40-year-old being required to start important games for the club. Sad to see Tom Cleverley, a player of limited ability whose game relies on energy, totally exhausted and exposed. He gives his all every game, but his presence in the midfield with Giggs is symptomatic of the mediocrity that has now become the norm.

Sad to see Antonio Valencia remain our primary attacking outlet, another workhorse whose one dimensional game exemplifies our entire attacking approach. He only has one leg, one that can’t cross. We only have one tactic: pass to the man who can’t cross.

Sad to see a talent as promising as Wilfried Zaha be so excluded from the team, unable to get a game despite injuries and theabject form of those in front of him in the queue. It is profoundly perplexing. He could do no worse than the current incumbent.

Sad that teams, home or away, no longer fear us.

Sad to see David Moyes slumped, hollow-eyed, in his seat as we stared defeat in the face. No touchline histrionics, anger or spirit. A resigned shake of the head as each half-chance was wasted.

Sad to hear his post-match comments, laying blame on the referee, absolving his players from responsibility for the current malaise. And his claims that he can “feel” that we are turning a corner when matters are clearly worsening by the game. If you are mostly winning, deflecting attention from the players after defeats can work, as Sir Alex demonstrated. Use the tactic when you are losing game after game and you give the players excuses for their own failings.

Sad to see a good, hardworking man drowning and ageing before our eyes, in a job that he could not turn down but should never have been given and would never have been given at any other elite club. One for which he simply doesn’t have the experience or skillset. Seeing him make one blunder after another and accepting them with little protest because they have become the norm.

Sad to want to see that good, hardworking man removed from his job for the good of the medium term future of the football club that I love.

Sad that, for reasons I outlined earlier this week, that won’t happen and that by the time the penny drops much damage may already have been inflicted from which it will be hard to recover.

Sad that, as unsuitable as he is, Moyes has not been backed by an arguably incompetent club VP and the cancerous owners, who are the principle architects of the decline of one of the world’s truly great clubs and sporting institutions.

Sad to see Sir Alex and Bobby Charlton so utterly dismayed by the current state of affairs, a situation for which both must take a level of responsibility. And that because of their respective roles in us finding ourselves here and their friendships with the manager, they will be unable or unwilling to admit that they were wrong and take steps to rectify matters.

Sad to see a club whose hierarchy have a will only to protect their own reputations and positions, briefing that United have a vast transfer kitty but that Moyes is unwilling to spend it this month because his prime targets are unavailable. Without action, chaps, no one believes you.

Sad to see the ludicrous contradiction that only the very best players are good enough for Manchester United, while fielding a team of players many of whom are so painfully average.

Sad to see that, if things don’t change, it’s very likely that our best outfield player will probably try to force his way out of the club again and that this attempt will be much harder to repel.

Sad to have so little faith in the idea of playing the ‘long game” where transfers are concerned, due to a total lack of belief that the club can deliver the Champion’s League football that top players so crave or pay the required money to clubs, players and agents required to sign them.

Sad to see fans questioning the loyalty of others because they voice their opinion and concern about the current state of the club.

Sad to hear boos at the end of the Swansea defeat. Voice your concerns to your friends or online, but support the players and manager in person, as the quite magnificent United following at the Stadium of Light did last night.

Sad that some fans now feel that “a few seasons outside the Champion’s League” is acceptable, or that transition requires an extended period of mediocrity, a notion that would be abhorrent not only to every club of a comparable size in Europe, but also to Sir Alex Ferguson, who dragged the club out of such defeatist thinking with a mantra that second place is failure.

Sad that some think that we will definitely achieve fourth place or that it will all be ok out of nothing but blind faith. It’s not a criticism. To a degree I envy them and wish I could draw my own conclusions, not on the evidence that I see and hear, but the feeling deep in my heart.

So what do we cling on to at this time? For me it’s the knowledge that, amongst a sea of dross, there are a few young gems in the squad around whom a fine squad could be built. David De Gea, Adnan Januzaj, Phil Jones, Jonny Evans and Rafael stand out for me as players who are talented enough to be part of another great team. And, despite its failings, this squad is better than we’re seeing. And there is always hope. Hope that Wayne Rooney and Robin Van Persie can return to fitness and explode as a partnership. Hope that I’m wrong, that Moyes can solve the puzzle and turn things around, that the owners pull their fingers out of their ar*es and spend or act before it’s too late. This decline will start to cost them serious money and that is the only thing that motivates them. This summer as many as eight or nine players could leave the club and they will have to be replaced, hopefully with better footballers, more talented and more exciting. And hope, in the medium term, that the Glazer trolls pack it in and sell up, to someone willing to allow United to be the self-sustaining giant that its popularity and turnover mean it should be.

So now there is only sadness, with a distant glimmer of light, at the moment out of reach, but something that we can only get closer to in time because, quite simply, it can’t get much worse than this, can it?