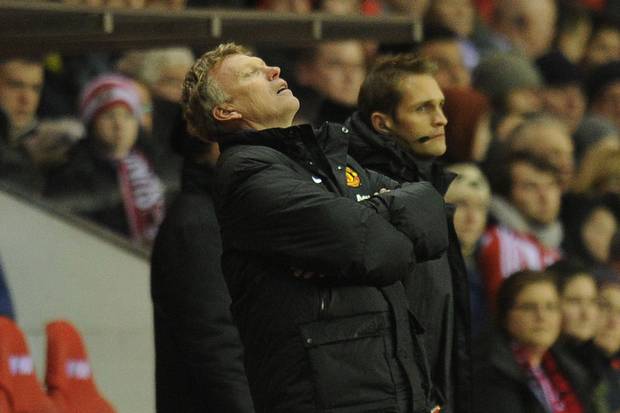 David Moyes insists Sir Alex Ferguson attending games and being a “shadow” in the eye of British media is not looming over him.

Manchester United’s poor season continued with three defeats from three since the beginning of the new year. Tuesday night saw a 2-1 defeat at Sunderland in the first leg of the Capital One Cup semi-final. Television cameras switched over and back from Moyes and Ferguson throughout which is nothing new seen as they have been doing it all season.

Personally, I don’t see a problem with Ferguson being around. It should not make a slight difference to Moyes, who is now in the big time and must learn how to handle it. Pressure will come from all directions when you’re managing a modern superb club like United. This simply does not compare.

Last night I was asked on the Back Page Football podcast whether Bobby Charlton and Ferguson had a right to attend games if they happened to be inflicting more pressure on Moyes. Again, I stated it should not make a difference. Ambassadors and club legends have every right to attend games either home or away.

However, Moyes has spoke out about the myth and is adamant that those spectating from the hierarchy are a great help rather than a hindrance as he attempts to put United back on track.

Asked if their presence was an added aspect of pressure, Moyes said.

Not at all. Alex is a great sounding-board for me. He is there to help, so is Sir Bobby. He is terrific. Bryan Robson is at the training ground regularly, I speak to him regularly. I find the three of them terrific.

So, there you have it. It’s all complete and utter rubbish.