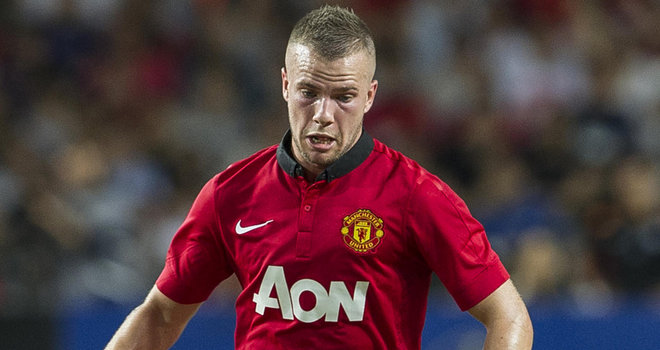 Tom Cleverley is fast becoming United’s schizophrenic midfielder. One week looking to receive the ball off the back four and dictate play (Villa away) then hiding away in areas of the pitch where even the ginger magician would struggle to thread a pass to him (every game since).

The arguments surrounding Cleverley’s place in the side have been well documented. For all his promise and potential there has been nothing in the way of positive performances to keep the twitterati at bay. When he is placed alongside Carrick in midfield, he doesn’t seem to have the know-how to find a space other than the one always occupied by Carrick. On Sunday, I watched Fletcher’s movement on the rare occasions Cleverley chose to take the ball off Ferdinand or Evans. Fletcher checked over his shoulders, made 5 yard adjustments forwards or backwards, found angles and offered himself in a way that meant that he had an option whenever he accepted the ball in to him.

When the roles were reversed and Fletcher was searching for his fellow midfielder to receive the ball, it was an embarrassing contrast. No movement, no offering to receive the ball, the only look over the shoulders was to see if anyone else would have the ball instead. Its worth noting by the way that Sunday didn’t just see the Englishmen fail to move; there were at least four occasions I counted first half that our defence had the ball and they looked up to find not one United player was running in the opposition half.

The anonymity of Cleverley in games such as the defeats we’ve suffered recently is infuriating. You wonder just how long it will be before an outburst from supporters matches the one afforded to Ashley Young when he was substituted earlier this season. There comes a point when enough is enough and it begs the question: why is Moyes still playing him in the middle of the pitch?

When Carrick plays, it is apparent that Cleverley cannot. He seems reluctant to want to get too close to his senior colleague’s space and instead disappears into areas which are neither an attacking option or act as defensive cover. Carrick has become our midfield linchpin and although he hasn’t performed well so far this season (injury has hampered him) he is still the first name on the team sheet. As a result, if Cleverley wants to play in United’s midfield then it has to be alongside Carrick.

Is it too late for him to learn how to do this? Perhaps not. Cleverley has never had a consistent run of games in the centre alongside his fellow countryman. Whereas Fletcher’s movement on Sunday was indicative of an education through playing in the same side as Roy Keane (and often Paul Scholes in a midfield trio), Cleverley has not had that schooling. That’s why the long term future of Cleverley in the heart of United’s midfield may depend on a short term move elsewhere. Not on loan (not again!) but why have we been so reluctant to shift the lad to the right hand side?

It’s baffling. Sunday was an excellent opportunity for Cleverley to be used on the right hand side of the midfield to help not just himself but the team’s cause. Smalling at right back is a constant disaster waiting to happen and whilst he did get forward more against Swansea, his wastefulness in possession is ridiculous. Ahead of him, we have a winger incapable of being anything other than a pinball player trying to trickshot his way back into form by smashing low balls into the box via deflections. It’s awful to see a side of the pitch where United once looked so dominant become so disjointed. Rafael is a huge miss and Valencia’s reliance on a full back capable of bombing on is massive.

So why not take the pressure off three positions? Remove Cleverley from his centre midfield berth and place him in a position where he could perhaps have more influence. He would certainly provide a better quality of delivery than what is being smashed in at present. Bearing in mind Cleverley seemingly can’t even play a 10 yard pass without putting some form of curl on the ball, his crossing should be exceptional! And stick Valencia behind him and let him bomb on in the same way the little Brazilian did last season. We’ll be losing a defender obviously in Smalling but at least we’d be having a go and it would be a welcome relief for Smalling, I imagine, as at the minute he looks more desperate for Rafael’s return than anyone else at the club.

It beggars belief that a manager like Moyes who utilised Leon Osman in such a way that he could adapt himself to any position across the middle of the pitch seems so reluctant to do the same with Cleverley. Gary Neville said in the summer that Shinji Kagawa could learn so much from playing on the wing simply by watching the way players in the middle of the pitch interacted. Whilst this is something Kagawa hasn’t done, that doesn’t mean Neville’s point isn’t any less valid. It simply means that Kagawa is poor (sorry folks, he is). Cleverley could well be someone who benefits from a different view of the game where he can have a look at when and where Carrick moves for the ball and therefore be better equipped to play alongside him when he’s moved back into the middle. From the right hand side he could provide a quality of cross that’s been missing for so much of this season and also link up better with our forward players in and around the box.

I’m not saying it would enhance his performance levels to the point he will be the next Scholes (incidentally, he was also one who was often used on the wing), neither am I saying Cleverley will be converted into David Beckham but should we not give it a try? Can we not, under this manager, look at something different from the current sorry state of the team and its midfield? It’s about time Moyes started thinking outside the box, instead of continuing with the same formula that lumps shit service into it.