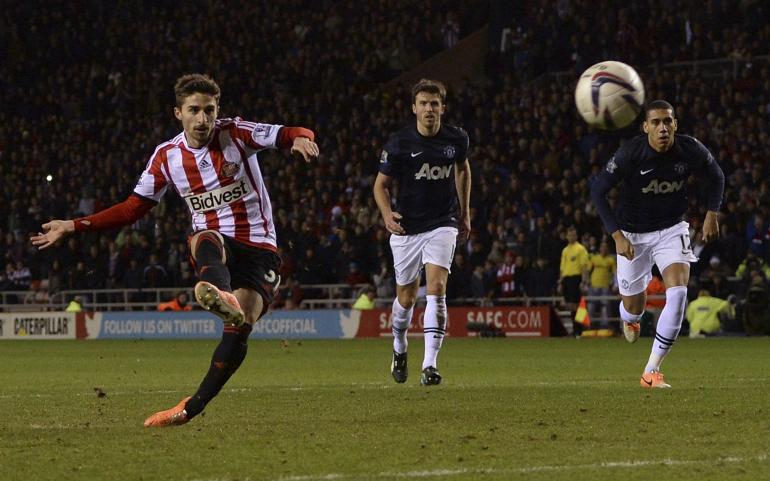 David De Gea – Didn’t get peppered with shots which sounds bizarre having lost, saved well from Larsson. Helpless for the goals. 6

Rafael – Ragged performance, could easily have been sent off. Not one of his better nights. 5

Jonny Evans – Did OK before coming off with a back injury. 6

Nemanja Vidic – Talk that he won’t extend his contract, but he got us back in the game with a towering header. 6

Patrice Evra – OK going forward, linking with Januzaj but found out defensively again and was not at his best there. 5

Antonio Valencia – Poor performance, gave away niggly fouls and did not provide nearly enough for the attackers. 5

Tom Cleverley – Very poor night to say the least. Got bullied in midfield and gave the ref a decision to make when he stuck out his leg which led to the penalty. 4

Michael Carrick – Normally top class in possession but there was no cutting edge. Needs to improve. 5

Ryan Giggs – Hit the bar then scored an own goal but did not do enough. 6

Adnan Januzaj – The one positive from tonight. Positive he is, he looked so dangerous, if only the other players played with his intent. 8

Danny Welbeck – Lone striker held the ball up well at times but was devoid of service from the men behind him. 6

Darren Fletcher – Didn’t do as bad as Cleverley but didn’t give the impact needed. 5

Chris Smalling – Was rattled by Altidore. 5

Chicharito – 4 minutes was no time at all for the Mexican to make an impact. 5