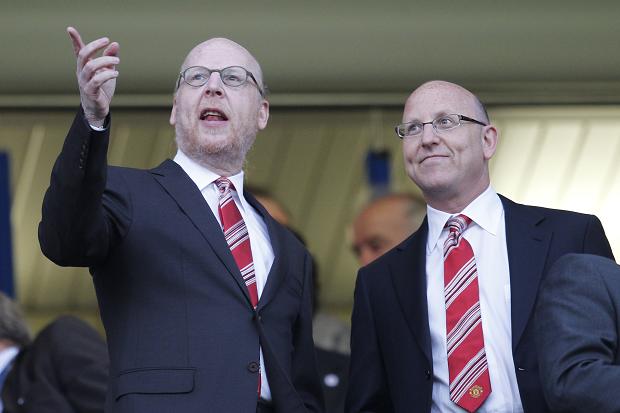 Another crushing home defeat, a forlorn looking manager who currently looks devoid of inspiration or answers, ABUs queuing up calling our great club a ‘laughing stock’, ‘the fall of the empire’, ‘end of an era’ and suchlike. Their ceaseless enjoyment at our painful predicament, coupled with their years of jealousy and hatred of our fantastic success spilling out is hard to take right now.

But the situation is exacerbated by a continuing facade, the Glazer smokescreen.

Is it coincidence that a day after Swansea’s first ever victory at Old Trafford (sorry to remind you) the club issue a ‘reassuring’ statement that David Moyes will have ‘significant funds in January and the summer’ to improve the playing personnel and thus our grim reading league position?

This is the laughably transparent spin the club will almost by default put out to appease restless fans. But it is not working. Since SAF’s retirement, the ownership and men higher up have done nothing but only talk the talk. There has been no walk. Fellaini’s deadline day signature was a sign of mad panic and was ultimately farcical.

Ed Woodward et Al have been bold and bullish for a number of months, without any signs of deliverance or backing up their stance. The summer window was full of optimism, ‘everything is in place to make a big-name signing’ they uttered. Cesc Fabregas, Ronaldo, Bale were all mentioned, none arrived. Ironically these names were touted just as the season ticket applications were being placed.

And it seems the Old Trafford spin gurus are weaving their fabricated magic once more. They have gone into the almost boringly cliched ”we’ve got money to spend, don’t worry there’s no crisis’ mode again.

Us fans have had enough bullshit for one transfer window, has anyone really got over last summer’s transfer window? It was a horror-show. The PR drivel that the club continue to spout is turning into a mockery of our great name.

Despite unprecedented revenue figures and sponsorship, something Ed Woodward will happily spend hours patting himself on the back for and papering over the cracks, why are we not competing for the best names along with city and the like, who freely spend and nail all their targets? It reflects in their league position in stark contrast to ours. Even the dippers, who have not been a domestic force for donkeys years can manage the likes of that racist bastard to stay and spend shrewdly in the market.

They have managed to keep their world-class player. Can we say for sure that we will be able to keep Rooney and Van Persie, just to name two, if this continues and we miss out on the economic windfall that Champions League football provides?

So isn’t it time for our hierarchy to at least give Moyes a chance at competing on all fronts, and help him do his job by putting their money where their questionably positive mouths are? We cannot just bury our heads in the sand now and hope everything will turn out OK, we need investment, there are no two ways about it. Otherwise there will be some serious repercussions on and off the field.

The Glazers are bleeding us dry. We are supposedly one one of the richest clubs in the world, so why has our only world-class addition in recent times been Robin Van Persie?

Is the Cristiano Ronaldo money, which has thus far not been used, actually there? Us fans deserve to know what is going on, after all we are the lifeblood of the club, we pay for their vast salaries, and no matter what people think, will continue to be there backing the team through thick and thin.

The sweeping statement issued by the club today has been met with understandable trepidation and cynicism. If ever the club needed the backing of our parasitic American owners, it is now!

People saying we have never been January spenders notoriously yes, but before our European hopes have never been in doubt or risk. It is a grave possibility this year that Champions League is not a foregone conclusion.

People, including David Moyes, saying the Fergie trademark of there being ‘no value in the market’, perhaps correct for players of a certain calibre, but I for one do not buy into that logic. There are plenty of targets out there, isn’t that exactly why you have an extensive scouting system? If not, you have to question how they are earning their dollar.

The bottom line is these players, albeit champions of England, are not doing it for whatever reason. They and we need a boost. How likely will it be? The noises are not encouraging, but whatever a manager says about transfers should not be taken at full value. I mean, it’s not like Fergie ever pulled the media’s leg with transfers, was it?

But in all seriousness, this could be one of our most vital transfer windows ever, because the consequences without reinforcements could be extremely damaging.

So please Woodward, Uncle Malc etc, enough of the public bull that the funds are there, we had enough of the tragic public pursuits of Thaigo and Fabregas last summer. Just go about your business in a quiet and productive manner, straight bat the transfer questions and just get on with it!

No more false promises, the time to deliver is now, we are behind enough as it is. Bar Van Persie, whenever we have needed a statement of intent in recent times, when it comes down to the crunch, the owners mysteriously go missing, or stay on flights from Australia!

Please stop this Glazer smokescreen, and make this January a successful month from a transfer viewpoint.

It’s the least David Moyes and us fans expect and deserve.