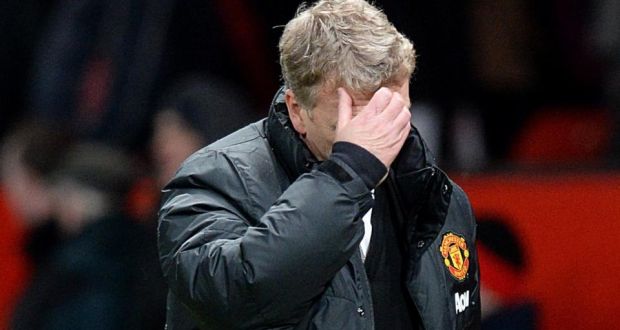 Sitting here having witnessed another appalling United performance, a second home defeat in a week, it’s hard to remember a time as totally demoralizing. The period after the loss at Anfield in 1992 was a desperate time, the feeling that our best chance to win the title in 25 years had gone and that we would maybe never see it happen again. The five days in 2010 when United were knocked out of the Champion’s League by Bayern, having led the second leg 3-0 and then went on to lose at home to Chelsea to effectively relinquish the title were tough. But this week has been something quite different. On both of those occasions we knew that we were close to something and that the team still excited us. You could still see genius on the field, even if in the end we just came up short. That has totally evaporated. The Swansea game feels like a watershed, the moment of clarity when you realize that the spirit in the club, or at least its staff, has gone. When I look at David Moyes, listen to his words, those of the players and their performances, it’s clear that the whole club is lost, or rather has totally lost its way. Setting aside the issues relating to the ownership, drastic underinvestment and comical summer, just looking purely at the team and staff, the spirit, confidence and fight has been sucked out of them. We know that Sir Alex didn’t leave his most magnificent squad, but they are better, much better than this. The players must take some responsibility for their failings, but it is the manager’s job to motivate, integrate and inspire them in to a functioning team. After every defeat Moyes says the same things: “We were unlucky,”….”We’ll approach the next match and go again.” But his eyes and demeanor tell a different story. He is drowning. He is a good man, but he has broken a high-functioning unit and has no idea how to fix it.

At most of the other members of Europe’s elite clubs he would have been sacked by now. Real, Barca, Bayern, Juve. At PSG, City, Chelsea, Spurs. Maybe Arsenal, maybe not. The only exceptions to that rule in recent years have been Allegri at Milan and Stramaccioni at Inter. Both were due to particular circumstances: Allegri is Berlusconi’s nodding dog, getting the job of a lifetime and taking the flack now that his seemingly endless financing has dried up; Stramaccioni came in immediately after Rafa Benitez was swiftly binned due to his Unitedesque start at Inter. Benitez didn’t get further than December. Again the new man was required to work on a tightening budget. Notice the similarities? Neither has brought success, or anything close. Moyes remains for two reasons. The first is very simple: Sir Alex. He was ‘the chosen one’ and our legendary former manager demanded that we ‘stand by’ our new man. It’s a command that has overridden all common sense on the matter within United’s fanbase and maybe at the club. It is as if we cannot accept that maybe, just maybe, the great man got it wrong. The evidence is there in front of our eyes, a Premier League winning squad reduced to mid-table cannon fodder, embarrassed repeatedly on our own ground by desperately average opponents. And what makes it worse is that the fight is gone. The lights have gone out in the players eyes. They simply don’t believe in what Moyes is trying to do. To be honest I’m not sure Moyes does any more. He wants to change things, make them better, but he has absolutely no idea how. There is no logic in retaining him whatsoever. Matters are getting worse, not better, and what exactly do people expect to change in the coming months? There is no evidence to suggest an upturn whatsoever. The manager sat in a press conference two days ago and said that he doesn’t expect to make any signings this January. What does that say to the players already here? Now, he may not be being entirely truthful, but from day one he has suffered from foot-in-mouth syndrome, and nothing he says,particularly as we decline, inspires any confidence in anyone. He was the wrong man. That isn’t his fault, but he doesn’t have the experience or respect, earned by winning titles, to motivate and command footballers who are serial winners. The challenge was always going to be a big one, but it has proven far too big for him thus far.

I believe that he is being handicapped in his job, which brings me on to the second reason for his appointment and continuance as manager. In June, I opined that Moyes and Woodward were “yes” men, two ambitious individuals offered the jobs of their dreams – jobs they would take on almost any terms. It’s becoming increasingly clear that one of those terms would be a relatively limited budget (compared to our immediate rivals) with which to work. Over £70m left the club in the last financial year to service and refinance the club’s debts. Meanwhile United worked their way through an incredibly uninspiring list of transfer targets, offering under the odds fees for each and every one. In the end they settled on, and overpaid for, a fall back option in total desperation. United’s summer spending amounted to little more than £30m, peanuts compared to their competitors. We then reached the January window, with most of the top clubs, and our fellow mid table ones, looking to strengthen. Instead we get the line that we are happy with our “strong” squad and that it is hard to invest in this transfer period. He doesn’t believe that. Offer enough money and players will suddenly become available. The whole scenario is totally absurd. £200m has been wiped off the share value of the club since Moyes became manager. Failure to invest will almost certainly lead to loss of elite European football, the money that comes with it and a loss of prestige and appeal for players and sponsors. And yet he can’t take a stand like Sir Alex or David Gill may have done and neither can Ed Woodward. Both are very lucky to have their jobs and they know it. So the Glazers can sit in their Florida mansion spending as little on the club as possible whilst decreasing the debt and therefore their increasing their own return, knowing that their minions will do exactly as they say and take all of the flack when things go bad. This weakness isn’t David Moyes’ fault, but it is a fundamental one nonetheless.

The most alarming thing about the Swansea defeat was the effect it had on me. When Wayne Routledge and Wilfred Bony scored I didn’t feel the knife through my stomach that every goal United have conceded for as long as I can remember has triggered. It has been diminishing for a few weeks. When those goals went in I felt a tickle and I laughed. Not a laugh of pleasure, just one that marked an acceptance that what has happened over and over this season had occurred again. Usually defeats can deeply affect the next few days of my life, a whole week if it’s a particularly big or important loss. I can’t buy a paper, listen to sports radio. Suddenly I find myself doing all of those things regardless. My love for the club hasn’t changed, my will for them to succeed, but my faith in their ability to achieve anything this season has. Essentially I’ve become desensitized to defeat, settled in to an acceptance of mediocrity. And the loss to Swansea was worse, because with the league well and truly lost the FA Cup was a trophy to hold on to, an alternative route to pleasure and success, one that has been lost at the earliest possible opportunity. I see no light in the continuing Champion’s League participation, just fear. What will Real, Bayern, Barca do to this United? And I fear that the acceptance of mediocrity will not just permeate me or other fans, but the club, the players and staff. As Liverpool fans will attest, that way lies the dark side of the force. I’ve seen otherwise rational people on twitter suggest that it’s “ok to have a few seasons out of the top four.” This is a club that Sir Alex dragged out of such thinking and created serial winners, for whom defeat was unthinkable. Suddenly we’re shrugging our shoulders and accepting it? This is the second largest club in world football, not Spurs. That mediocrity must be purged as quickly as possible to stop the infection spreading. And, as unpalatable as it may be, that infection is in the veins of the Tampa trolls and their two UK minions.

Statements of dissent are often met with accusations of being a “plastic fan”, or not supporting the club. “Go and support Chelsea.” The perverse logic being that to be a true United fan you have to offer blind faith and devotion to every pore of it. In reality it is that devotion and love for my club that leads me to these conclusions. I believe that it would be better off, in safer hands, without all of the authority figures at the club. The potential consequences for a continuation of the current trend are extremely concerning. Rats desert a sinking ship and the biggest, strongest rats will be at the front of the queue. “Who are you to question Moyes? Got more experience than him then?” It doesn’t take a footballer to recognize a failing player, and it doesn’t take an actor to critique a terrible film. This isn’t a contest to be the most blindly devoted fan. Questioning an individual’s performance is not akin to showering him with verbal insults and abuse. And what people say on twitter, or on a blog like this, is not undermining the club. The staff and players don’t need to go on to the Internet to know that they are failing. In private I’m sure that they would admit it, David Moyes included. He is the seventh highest paid manager in world football. You take the job at this great club with your eyes open. The world is watching and expecting.

However, for all of the reasons stated, whilst all logic points towards a parting of ways and regardless of what insignificant little oiks like you or I think, the club will do nothing. For now. We are Manchester United and we don’t sack managers, particularly compliant ones.