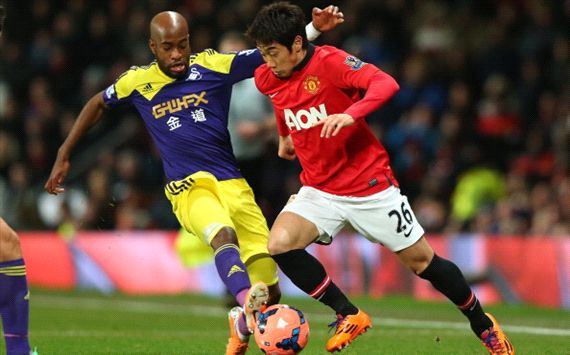 After losing four matches at Old Trafford this season, Manchester United dug themselves a deeper hole early on in Sunday’s FA Cup match against Swansea City. As United have failed to reach the FA Cup final since 2007, the reds have rarely gotten an easy ride in the FA Cup.

In the last 29 draws, United have been drawn against top flight competition 24 times, including the last nine FA Cup matches in a row. As for Swansea City entered Old Trafford currently sitting in 13th in the Premier League – far too close to the relegation zone for comfort.

The first half kicked off with David Moyes’ men controlling proceedings. Per usual, United attacked from wide positions and done so primarily from the right. Chris Smalling pile-drove forward alongside the right flank, as if he were playing as a number 7, or 10 role. Smalling was the brightest spot in our attack for the majority of the first half; however, his final ball into the box went array.

While the reds continued to uphold the majority of possession and chances, Javier Hernandez’s miss in the 11th minute would immediately sting the backs of the home supporters. As Hernandez appeared to miss a sitter in the penalty area, Swansea City broke beautifully into United’s final third with a series of three passes.

Yes, three passes. United’s defensive unit were broken down far too easily in the 12th minute after a lovely ball through the middle of defense found the boot of Wayne Routledge who lifted his attempt over Anders Lindegaard. Rio Ferdinand was drawn too far up the pitch in the buildup, while Smalling and Jonny Evans looked in no-man’s land.

The Swans lead would only last four minutes as Hernandez made up for his miss in the 16th minute. A glorious cross from Büttner found a driving Hernandez in the six-yard box – who taped home past Tremmel with his left boot. Hernandez’s tally was his 55th of his United career.

As the ball flew into the back of the net, David Moyes did not move a muscle. Ryan Giggs and Phil Neville ejected from their seats after the Mexican international drew United level, yet Moyes was stone-cold. Eyes bloodshot and grimace on his face – recent results have been taking a toll on the Scot.

In the midfield, Darren Fletcher controlled possession for United, in terms of his vision we’ve missed during his absence.

The second half began as the first, with United holding onto possession but not truly having any real telling chances. Smalling continued to find his way forward and like Ashley Young and Adnan Januzaj have done so often in the past, he dove.

After the hour mark passed, it became quite apparent Moyes was playing for the win – not the replay. Januzaj entered the park, replacing Antonio Valencia. The Belgian stepped onto the pitch, with the same birthday as Cristiano Ronaldo but ten years younger – primed and ready to continue to win over the Old Trafford faithful.

And then continued the horrid service. David Moyes shook his head in disgust as Smalling, Valencia, Büttner, Cleverley and more continued to lack the quality of service into the penalty area.

United’s evening got a bit darker after Ferdinand took a knock after going knee to knee with Bony.

Nearly four minutes after stepping onto the pitch, the Brazilian, whilst he came on like a freight train, received a straight red from Mike Dean after a studs up challenge on Cañas.

As the Swans and reds entered the final minute, it was Wilfried Bony who punished United. Routledge maneuvered around Darren Fletcher, and sent in a telling cross which finally found Bony.

Bony thrashed the cross into the back of the net with his head – exactly what the doctor ordered for the Swans.

With that, Manchester United were ousted from the FA Cup. And United had lost another match at Old Trafford.