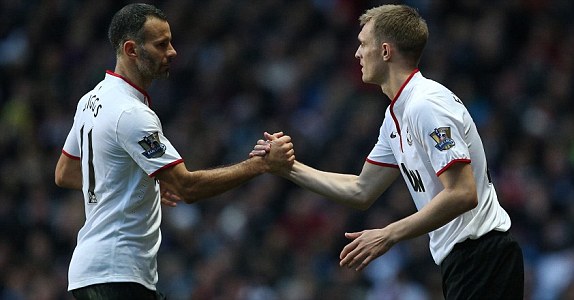 The pleasure that football fans experience watching their team is multilayered and evolves as we mature and our experience of the world around us changes. Seeing great goals and games is a universal joy, but we all have our own, less obvious, moments that elicit positive emotion. As a kid, walking up the steps and out into the stands at Old Trafford, the greenness of the pitch, the tobacco smell, the noise, were all amongst the most enjoyable and familiar moments of a match day. As I’ve aged and watched so much more football those experiences have settled back into something of the norm and for me it is now on the pitch that my guilty pleasures play out. There are obvious and probably universal ones for United fans, like seeing a young academy product burst into the first team squad and not look remotely out of place. It is important at United, the club having started only one game since 1937 without a youth team product in the first team. It has greater significance than at any other English club. Another great thrill is seeing a new signing, the younger the better, doing something on the pitch that makes you sit up and think “what have we signed here?” The obvious example is of course Cristiano Ronaldo’s substitute appearance against Bolton. There is little that provides more pleasure for aUnited fan than seeing a young kid do special things.

All of these examples are fairly obvious, but I have my own little football fetish, which I was reminded of during the West Ham game at Old Trafford. It is topical both because of its occurrence after our second goal and because my previous recollection of such an event involved another player at the forefront of the news at United. But back to the West Ham game, United leading 1-0 and in cruise control, playing as well as they have all season. The ball fell to Adnan Januzaj on the left hand side of the Hammers’ penalty area. In the blink of an eye the young Belgian dropped his shoulder, cut inside a bamboozled James Collins and struck a delicious right foot shot past the helpless Adrian. Teenage kid? Check. From the youth team? Check. Did something special? Check. Already football porn. But it was what happened next that was the coup de grace. Wheeling away, face contorted, the look on Janujaz’s face was not one of a man who had scored the second goal in a comfortable win against struggling opposition. He had a face that said’ “f*ck me, what have I just done?” The look of wide-eyed astonishment when you’ve just fulfilled a dream. “I’ve scored at Old Trafford for Manchester United!” It’s a face that I cherish, because until that moment, inside of him, he still had the same dreams that we all do. It’s all too fleeting. That second in which something truly life changing has happened. The moment of release and jubilation passed and Januzaj ran half the length of the pitch pointing to thank those who had made his dream come true. The ice cool kid is human after all.  It’s that face, that moment which, even during the tricky times the club currently faces, shows just how big and special our club is. It’s one where, for players, dreams can come true.

Sightings of that moment are pretty rare. For a short time it accompanied Javier Hernandez’s goals, during his explosive start to life at the club. He couldn’t believe it any more than we could. Another notable occasion was on Ruud van Nistelrooy’scompetitive debut for the club against Liverpool in the Millennium Stadium during the Charity Shield in 2001. United were 2-0 down in a game that hovers somewhere between meaningful trophy and preseason kickabout, when VanNistelrooy slid a shot under the keeper and promptly celebrated like he’d scored the winner in the European Cup final. It was a look which betrayed the strain of the original move falling through after failing a medical, a serious cruciate ligament injury, recovery, finally signing and then proving that he still had it and had achieved his dream of playing and scoring for United. It is the rarity of that sight that makes it so satisfying. As the games and goals flow that moment of release and the realisationof a dream becomes routine. The appreciation at just what the player has often declines. Van Nistelrooy is the perfect example. By 2006 his attitude had deteriorated to such an extent that Sir Alex was relieved to be packing him off to Real Madrid. For a rare breed of player that reverence of the club and feeling of being lucky to be a part of it can endure:  Gary Neville, Paul Scholes, maybe Patrice Evra and back to some of Busby’s Babes.

Which brings me on to the second part of this exercise in self-indulgence: the last time I saw and appreciated a Manchester United player, having scored in a run-of-the-mill Premier League game, whirl away, face contorted in a celebration out of keeping with the context of the match. 24th November 2012, at home to QPR, a header from a corner by Darren Fletcher. It was a moment of catharsis, a first goal after returning to the side after a long absence following a diagnosis of ulcerative colitis, a serious and debilitating bowel condition which, we now know, had a severe effect not just on his professional life but his home life too. He was potentially facing a lifetime of disability and pain. To have fought back, with treatment, to a level of fitness where he could play Premier League football was an astonishing battle of will. Those who saw the pictures of him at his emaciated worst or who suffer from the condition themselves can appreciate just what an achievement it was. For a short period Fletcher was able to play, although not to his previous high standard, but in January his symptoms again overpowered him and he was told that a major operation was the last and only hope of his condition being minimised in the long run. It seems absolutely remarkable that less than a year after that successful procedure Fletcher is not only contributing to Manchester United’s first team squad, but starting a vital league game at Hull and putting in an important shift. Dare we believe that he can remain healthy and return to his best, the snapping, box to box bundle of industry that we currently so desperately crave? At 29 he has age on his side, but it is hard to know what toll the last couple of years have taken on his body. It would be a heart-warming story. Whether he achieves that or not, in my search for a celebratory fix, I know who’s face I’d next like to see grimacing, eyes bulging, in a mixture of relief and joy. Given the rapturous reception he received from the travelling United fans at Villa Park, who cheered his every touch, I don’t think I’ll be alone in that sentiment.