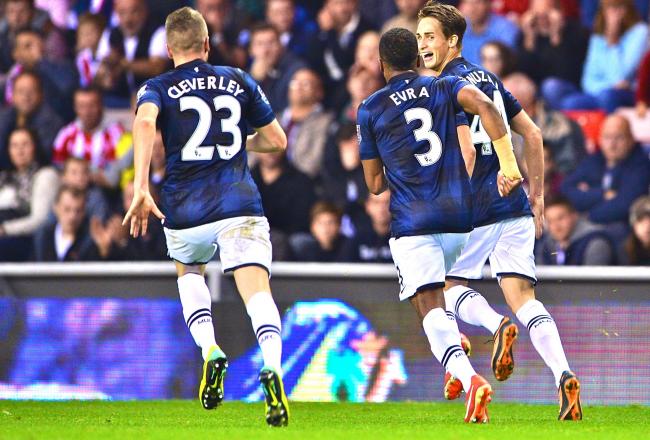 Temperatures dropping, torrential downpours and blustery winds were the major talking points in Wednesday’s Capital One Cup clash between Stoke City and Manchester United at the Britannia.

Until Mark Clattenberg halted the match nearly 30 minutes into the first half due to the hail. After a five minute break, Manchester United and Stoke were back out onto the pitch for what was a quite motionless first half.

The cold temperatures and inclement weather played into Stoke’s advantage in the first half. Ashley Young created had the first chance in the third minute after a lovely turn from Welbeck to set up the play, who found an onrushing Young who unleashed a shot wide of Sorensen’s target.

United supporters, whom were heard all throughout the Britannia on Wednesday, clasped their fists when Patrice Evra took a knock early allowing for Buttner to warm up. Elsewhere Fabio wept in search of a place back in the first team  – a spot which unfortunately may never come if Evra has anything to say about that.

The Potters have not gone past this stage of the Capital One Cup since 1972, when they actually lifted the trophy.  As for David Moyes’ squad, United have the four league cups to their name, making it to the final of the competition eight times.

The tight defense of Stoke’s Cameron, Shawcross, Wilson and Pieters made matters difficult for the visitors. United could not find the pedal to move forwards with consistency, which could have to do with Mark Hughes’ tactics to have his squad fall back as United entered their half.

Anderson did feature quite well in the first stanza with nice passing movements with Cleverley and Valencia. Yet, with no real chances coming, it appeared that United would need something special on the night. Cleverley looked a bit happier with a midfield consisting of three – while he appeared more confident, any performance is more ambitious than his against the defeat to Newcastle United

In first half stoppage time off a corner, the ball found Jonny Evans on the back post who was unable to settle the ball down. In reality, Evans should have done better.

To begin the second half, United appeared more than welcome to allow Stoke to cross the ball into the box. And just as the match began to fall into a lull period, the inclusion of Javier Hernandez changed the entire complexion of the match.

Chicharito, like a greyhound awaiting his release – took the match by storm. With Cleverley and Jones working the ball into wide areas on the pitch relying on the wide play from Young and Valencia, it was the Mexican international who set up the first goal of the match.

Chicharito settled the ball atop the box and Young came running onto the ball like a train leaving the station. Young’s right-footed effort, hit with power and placement, slid into the back of the net in the 62nd minute.

The tempo of United’s play immediately rose – the away support echoed throughout the ground.

Cleverley was getting stuck into tackles, winning the ball atop the penalty area against Ireland.

But then Hughes’ men found their footing. The 71st minute saw United take a minor slip up, but their lead was preserved thanks to excellent defending from Smalling who cleared the ball off the line. Just as Stoke were pushing back, the game reached a boiling point for the reds in the final quarter of an hour.

As Young carried the ball alongside the left-flank, he drew in two Stoke defenders, and stunned them with a three-yard pass to the onrushing Evra.

Evra collected the ball in the 78th minute, touched past a Stoke defender, and curled a beautiful right-footed shot into the corner of Sorensen’s net.

Despite the clouds and rain at the Britannia, United appear to be reaching towards brighter days ahead.

United are showing signs of life. Particularly in the midfield.