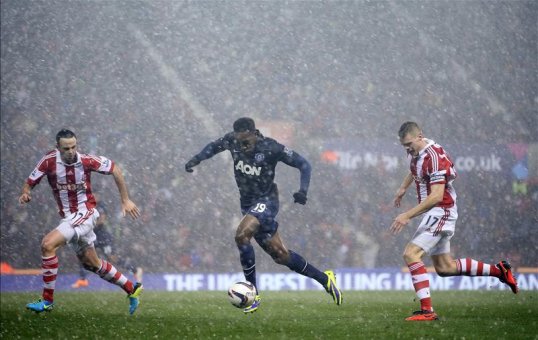 David De Gea – Largely untested in troubling conditions. It was testimony to our defence at a notoriously difficult ground that he did not have much to do. 6

Rafael – Had Assaidi in his pocket and continued his brilliant partnership with Valencia, an attacking threat as always. 7

Jonny Evans – Coped admirably with Crouch’s aerial threat. Establishing himself as a key man at the back. 7

Chris Smalling – Composed at the back, was able to bring the ball out of the back and did everything with calmness. Made a vital glanced header from a right sided cross to deny Crouch. 7

Patrice Evra – He didn’t himself that his right peg was useful, but what a peach! Rarely caught out of position tonight, which was an added bonus. 7

Antonio Valencia-  Not one of his better nights, despite getting into dangerous areas, his crossing was not as potent as the weekend at Villa. Nonetheless a decent display. 6

Tom Cleverley – Ran the show in midfield. Continued his impressive display against Villa, by spraying it around, made interceptions and closed down the opposition. MOTM 8

Phil Jones – Was very good alongside Cleverley. Put in more tackles and was extremely powerful. A very good foil for Cleverley, they both seem to play well together. 8

Anderson – Apparently in the last chance saloon. Well, he didn’t take it. His passing was sloppy, often over-hit, and failed to get a grip on the game. We looked better after he was replaced. 5

Ashley Young-  Largely anonymous until his stunning strike. Grew in confidence after that goal and provided the assist for Patrice Evra. He has either put himself in the shop window or convinced David Moyes to give him another chance. 7

Danny Welbeck – Worked hard as always. Didn’t get many opportunities playing the lone striker role. A header went over but played his part. 6

Javier Hernandez – Brought urgency and upped the tempo. Allowed us to stretch their defence. A decent cameo. 6

Darren Fletcher – Another rousing entrance from our supporters, controlled the game which was already effectively won. Kept possession when it mattered. 6