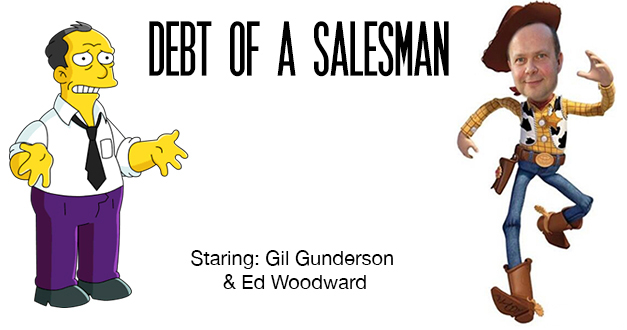 As the transfer window draws closer the Manchester United PR Spin machine is in full effect. Depending on which rag you read, the Glazers will hand Moyes from anywhere between 60-100 million in January. Stop me if you’ve heard this one before, United’s net spend on transfers since the takeover in 2005 has been around £120 million (factoring in Van Perise and Fellaini) and the quality has gradually declined. Under the Glazers United have been making more money than ever but spending less, by the time the debt is cleared off the club itself will have spent £1 billion on a takeover. Not United taking somebody else over and servicing the finances of their new operation but United have had to pay £1 billion for a family from America to take them over.

Some United fans have noticed the utter lunacy of this and are not happy. The almost non-existent attempt at bridge building with irked fans was not helped by replacing David Gill with Gil Gunderson from the Simpsons otherwise known as Ed Woodward. I can already see what January is going to be like now with Ed Woodward sweating and shaking over the phone:

“Come on guys how many players can you put us down for to buy? A lot? Please say a lot I need this…”

Of course we are not the only ones who have to put with up with these ridiculous human beings controlling the purse strings as this season Hull City fans became the latest in a long line of fans to take umbrage with their club’s owners. Humberside’s greatest export since John Prescott’s right hand have an owner, Assem Allam, who is thoroughly determined to change the club’s name to Hull Tigers and dispense with the 109 year history of the club to make it more marketable. Fans have protested against it, the owner responded saying the fans could “die as soon as they want” and proceeded to file the application to change it anyway. Say what you want but Assem Allam can never be criticised for being held to ransom to do a PR charm offensive.

I have some bad news for those Hull fans though, your protests mean nothing, you’re owner doesn’t care. He doesn’t care because you’re still putting money into the club and his pocket by buying tickets, club merchandise and let’s face it, Hull wouldn’t be in the Premier League and having a solid season right now were it not for Allam’s money.

Cardiff City are currently in the same situation complaining about how owner Vincent Tan, a man more eccentric than the creation of Salvador Dali and Dr Seuss, is treating Malky Mackay. Tan fired Mackay’s trusted head of recruitment Iain Moody to replace him with an inexperienced and unqualified friend of his son. Cardiff fans were in uproar about this but they were happy to ditch their colours, their badge and pretty much their entire identity for Tan’s money. That money by the way will not be forthcoming in January as Tan has said not a penny will be spent in the latest salvo of that power struggle, a struggle Mackay will lose.

You could add Chelsea fans love of their billionaire man child to this list of hypocritical fans, although we can’t expect a club from a wealthy part of West London to have many principles, they hated Benitez (who won them a trophy and secured Champions league football) but Abramovich appointed him. Don’t like it? Stop paying for your massively overpriced season ticket and leave empty blue seats around Stamford Bridge, Roman might get the message then. Manchester City fans for years loved to rub in our faces how they were a proper community club, now they all sing the praises of their vulgar, cousin fucking, oil rich, human rights abusing, gay hating, monarchical owners just for a very expensive bribe.

Like it or not City fans, you paying your money into that club make you tacitly complicit to their draconian laws and abuse of migrant workers in Abu Dhabi. They use you to help legitimize and clean up their political image.

We don’t escape the long slimy fingers of hypocrisy either, United fans furiously protested against the Glazer family but apart from those who broke away and formed FC United, nobody did anything concrete about it and certainly not when we were winning trophies! The Green and Gold campaign was a nice start but when those scarves began to be worn over replica shirts while in the stadium they may as well have launched a protest which saw all so called Anti-Glazer fans attending games dressed in S&M gear. Certainly having thousands of fans turning into Old Trafford dressed as the gimp from Pulp Fiction would be an innovative method of psychological warfare against opposition teams but the digressions of my disturbed mind are best left for an entirely different sort of website…

If football fans want to protest effectively against owners of football clubs – who by the way have generally always been total Alan B’Stards (Martin Edwards) – then you need to withdraw your money. Don’t go to matches, don’t buy merchandise, don’t pay for the club TV channel and don’t even pay for Sky Sports, I don’t and therefore I get to annoy all of you on the horse I rode in on. If you want clubs to be run by the fans for the fans you have to be pro-active and smart rather than sit there passively moaning in a seat you paid hundreds of pounds for at a cup game you didn’t want to go to but were forced to pay for anyway.

Unfortunately you just think capitalism and glory hunting got their claws a little too deep into the majority of English football fan for protests of this nature to ever happen. As long as owners come along with flash of their cash and promising the world the fans will lap it up until its too late, just look at Portsmouth.

As long as fans put success over principles and valuing a club as part of the community then you are all to blame for these truly awful people owning your club. If Salvador Dali wanted to use surrealism to demonstrate the ridiculous nature of modern football fans he could have just painted a Manchester United season ticket holder in a Norwich City scarf.