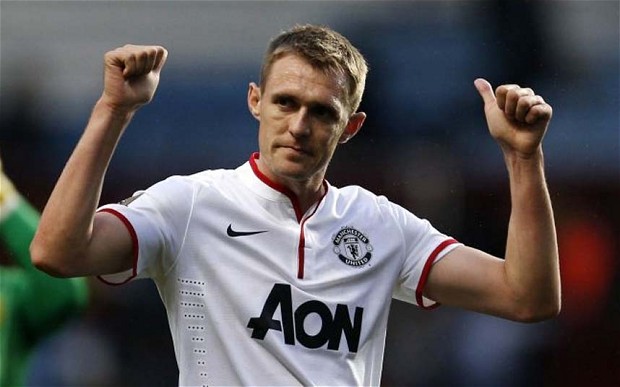 Darren Fletcher has been through ‘make or break’ situations on more than one occasion over the past two years. Despite making a tentative playing comeback at Christmas last season, he was hampered by a debilitating condition known as ulcerative colitis.

The Scot made an emotional return at the weekend in our routine win over Aston Villa, afterwards he reflected on the hell he endured over the past two years:

This is it, I’m back for good, this is hopefully the game which means I’m back now.

I seem to have come through the setbacks and health issues and I’m thankful for that. It’s onwards and upwards now.

I couldn’t leave the house. Simple stuff, like taking my kids to the park, going for a meal with my wife. The nature of the illness meant I just couldn’t do it.

There was a day in May when we said ‘this is it’. Once I came out of that operation I would know whether it had worked or not.

There were no guarantees. If the operation was not a success there was no way I would be able to play football and my everyday life would have been very difficult. It was very emotional. There was a lot of fear and anxiety.

Fletcher was never forgotten during his recovery process. He was specially singled out by Sir Alex in his rousing final address to the United faithful, and when he reappeared at Villa Park, the cry of ‘One Darren Fletcher’ reverberated around Villa Park and the Villa supporters were in unison with our fans in giving Fletcher a round of applause and standing ovation, something which didn’t go unnoticed with Fletch,

Fletcher is hoping to not look back now and is adamant that he is fully over the illness, which is fantastic news.

I don’t want to take it easy. I’ve done enough of that. Ever since I was a kid, I’ve wanted to play football. I’ve been fortunate enough to have the opportunity to play for Manchester United and wasn’t going to give that up lightly.

I battled through it, and I’m only 29 years old, I think I’ve got plenty more years of playing left in me. I could have a career all over again if I get my health right, and hopefully that’s what I’m going to do.

The acid test as far as Fletcher’s recovery is concerned is if he will be able to take part in tomorrow’s Capital One Cup tie against Stoke at the Britannia. No doubt he will want more minutes under his belt and the cup is a good route to take to give him those minutes.

We have missed Fletch over the past season and a bit, he adds experience, a steely competitiveness and he is a winner.

Whether or not he can rediscover his old form, where he was arguably one of Ferguson’s first names on the team-sheet in the big games remains to be seen.

But seeing him even on a football pitch is a great story in itself. He has returned against all the odds, we are all praying it is for good.