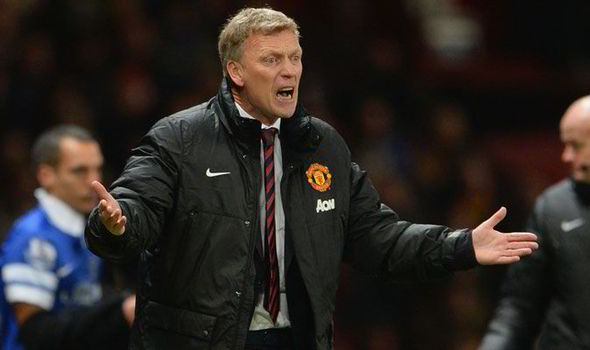 The perfect storm has arrived. Deep down we all knew it would, but few could have predicted just how devastating the consequences would be. Years of underinvestment, Ferguson’s midfield blind spot, the appointment, much criticised at the time that it was made, of a manager with no top level experience or trophies and a slapstick summer transfer window has resulted in the mess in which we now find ourselves. After a week that has brought us three home games, one goal, two abject defeats and a very fortunate win, talk of the title, even from the most optimistic Reds, has made way for blind hope that we can even make the top four. It seems a long shot. Only David Moyes seems to think, publicly at least, that we are still in a title race. Most, deep down, have seen a sharp decline coming, but have managed to fool themselves in to thinking that it would all be alright. I certainly buried my head deep in the sand. Why? Because we’re Manchester United, as if the name automatically entitles us to a top three finish. No one imagined it would be this bad.

Make no mistake, the seeds of our current malaise were sown in 2005 by the Glazer takeover and the resultant debt, piled on to a successful and profitable business. Whilst the debt is now in decline the money required to service it over eight years has amounted to hundreds of millions of pounds. It is to Fergie’s great credit that he kept us so competitive right to the end. In his final year as manager over £70m was spent on servicing and refinancing the debt. The ‘money no object’ stance of Ed Woodward was never more than bluster and propaganda. Despite Sir Alex’s negligence in not strengthening United’s midfield for a ridiculous six years, the opportunity was there this summer to right that wrong. Between the Vice President and the manager they botched it, and the consequences could continue for five or ten years. Get it wrong now and United could unravel. Things could get a lot worse before it gets better.

In truth the Woodward/Moyes reign had alarm bells ringing from very early on: the newspaper briefings about the world class players that would be targeted, the replacement of key coaches at the club, talk of the huge sums of money available, the pitiful bids and unimaginative list of targets, the word that Moyes wanted to take his time and did not know the top end of the market, the abject pre-season performances, the case of foot in mouth suffered by the manager when discussing the role of Wayne Rooney in the team and then one of the most farcical transfer deadline days in history. A summer that was the most important for United in twenty years had been botched. Again we persuaded ourselves that we could get away with it. We haven’t.

Then the season started, quite brightly as it happens, with a thumping win at Swansea. A collective sigh of relief. But that is as good as it’s got in the league, a hard fought home win over Arsenal aside. The excuses had already started, Moyes bemoaning the tough start his side had to the campaign. That bought him a little time, despite the abject nature of the defeats at Liverpool and City, but the opposition got easier and the results still didn’t come, the real lows being the home defeat to West Brom and this last week. The football has been, for the most part, painful. There is no imagination or player expression. Tactics seem to amount to getting the ball to a winger who crosses, usually inaccurately, to one of the midgets we have in attack. And much as he tries to sound like the manager of Manchester United, Moyes’ small team thinking regularly pokes through. Recent examples include his assertion that he’d have taken a point at  Cardiff before the game and his intention to “make things difficult for them (Newcastle)”, as if we’re the minnows facing a giant. Come the game itself we didn’t even do that. There is then the standard wide eyed befuddlement during the post match interviews. United fans demand two things: winning and attractive, attacking football. Offer one of those two and you can get away with it. Neither and you’ve got real problems.

The on pitch malaise isn’t just tactical. Aside from Michael Carrick, United’s best options in midfield appear to be a centre back and a forty year old. Jones had a fine last hour against Shakhtar, but watching the two of them stand and stare as opposing midfielders just wandered past them and on to the exposed back four was frightening. I doubt anyone but Fergie could get a tune out of our midfield. But then Moyes does have a midfielder of his own choice, the big, hairy Belgian signed a minute before the deadline in August for a fee considerably greater than the release clause that could have been triggered a few weeks earlier. Fellaini is a player that the manager knows and yet neither he nor the player seem to have the foggiest idea exactly what his role is. He has excelled as an offensive midfielder and a holding player for Everton and Belgium. At United he has played in the no mans land between the two. Phil Neville has stated that we are trying to get him fitter to allow him to play a box to box role, but he has neither the mobility nor passing range to play that role.

Of course, the players have to take some responsibility for their dire performances. The majority simply haven’t come anywhere close to their potential, the exceptions being Rooney, Januzaj, De Gea and Jones. Confidence is clearly now at an unprecedented low. Rio Ferdinand came out and publicly criticised his manager for only naming the team on the day of the match, but in reality his biggest problem is that his legs have gone. The Shakhtar game looked like his ‘Neville v West Brom’ moment. I doubt he’ll see the light and walk away. Shinji Kagawa continues to underperform as do all of the club’s genuine wingers. Danny Welbeck continues to flatter to deceive. A striker who doesn’t score goals and who doesn’t have the qualities to play wide effectively. The squad has 6/7 players who simply aren’t good enough for Manchester United. I don’t need to name them. We all know who they are. But it is the manager’s job to motivate the players and get them performing at their best. That was Fergie’s greatest strength. David Moyes, so far, has succeeded in doing the exact opposite.

The great curiosity of the season has been the contrast in success in the league and Champions’ League, but results haven’t necessarily followed great perfomamces. Only the two victories against Leverkusen have been impressive, although on both occasions the opponents were clearly tactically naive and far from their best. It has been suggested that for European teams United still have a fear factor which has long since disappeared domestically. Sami Hyppia supported this contention by admitting how nervous his team were about facing us. That no longer exists at Premier League level. In the remaining four European games we did just about enough to get away with a result.

Perhaps most significantly, we are a club without a philosophy, a vision of how we should play and teach young players to play, and a blueprint we look to when assessing potential targets. This goes back to around 2009. Great players left, others retired or simply aged. The carousel of creativity, pace and movement has disbanded and been replaced by a muddle. Tactics have become about fitting in the players we have rather than purchasing and selecting players to fit a system. It’s hard to see us reach the heights again without this changing. A pertinent question is, therefore, what is David Moyes’ philosophy? His team selections have largely been very positive but there is no hint of anything more than a rudimentary system or pattern of play. Three goals from open play in eight games at home in the league tells it’s own story. If anything we are a set piece team. Roberto Martinez and Mauricio Pochettino have shown at Everton and Southampton respectively how quickly this transformation can be undertaken, with less talented players. The myth that it takes time doesn’t wash. ‘Needs must’ is no longer an excuse. ‘Needs must’ isn’t working.

So we find ourselves in a hole. A deep, dark one. The consequences of missing out on the Champions’ League football are enormous. The club will lose £40-50m in tv and prize money, commercial deal negotiating leverage will decrease, the very best players simply won’t join a club outside of that elite group and one or two of United’s genuinely world class players will be looking for the exit door. Wayne Rooney would almost certainly be the first out, a frightening prospect given that he’s been, at times, a one man team this season. You could forgive RvP for assessing his options too. He’s 30 and has never won the cup with the big ears. He can’t afford to wait around for United to rebuild. David de Gea would start glancing anxiously towards home, although I think it would take at least a couple of seasons of underachievement for him to push hard for a move. Once a club misses out on the top table that exile can begin to perpetuate itself. The fans are still talking about targets like Gundogan, Reus, Pjanic, Khedira, Matic, Di. Maria. Finish outside the top four and you can scrub that whole list. Most players would still love to join United, but most players aren’t good enough for us.

All of the above leaves the club needing to make some big decisions. Is Moyes still the man to take us forward and, more pressingly, is it time to throw off austerity and blow the bank on big players in January? Can we even afford to do that? Can we afford not to? You can be sure that all of those issues have been discussed at length by the suits. The likelihood is that Moyes will be given time and a transfer window to put things right. The fans are split on whether that should be the case and, for the first time, there is significant weight behind the idea of him being removed. Post Newcastle I was sure that he needed to go. I tweeted that and was surprised to receive only one dissenting reply. Now I just don’t know. Those who feel that he should be given time cite Fergie’s glorious tenure and state that we “are not that sort of club. Do you want to be like Chelsea?” But do we persist with a failing choice just because we got lucky beyond our wildest dreams last time? The longer the wrong man is left in charge the greater the damage done. Chelsea are a fine example of both the positives and negatives of firing a manager. Binning Ancelotti was a farce, but would they have a European Cup in the trophy room had they not sacked AVB? It became clear very quickly that he was the wrong man. This is not the same club that Sir Alex walked in to in 1986. He took over a team in the relegation zone which hadn’t won a title in nearly two decades. Moyes inherited title winners at the second wealthiest club on the planet. But sacking Moyes will not change the owners, make more money available or change the executive structure and competence at the club. The decisions made now will shape our medium term future. We knew in May that the following twelve months would would make or break us as a force at the very top and few expected a title. Transition was inevitable, but no one foresaw this.