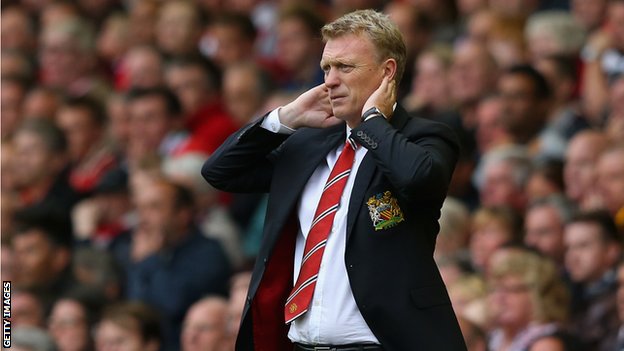 Two home defeats in a row is bad if you’re Manchester United, worse still if you cannot even muster a goal in those two games and if you’re the man who is trying to follow on from Sir Alex Ferguson then the pressure is nigh on intolerable, when you already had three black marks against you. Things are not good right now for David Moyes and cracks are showing in his demeanour, increasingly prickly press conferences, his constant squad rotation, the rushing back of an obviously unfit Robin make him look a man out of his depth.

“We’d like to generally play better, we’d like to pass better, create more chances, and defend better when those moments arise.” The Scotsman uttered with the conviction of Liberal Democrat. Not exactly Rinus Michels’ Total Football so much as Tim Henman’s Total Tennis.

In Moyes’ defence, the squad he was left with was poor, outside of three world class players and a couple of others with tremendous promise, it is for all-intensive purposes a squad full of jobbers. Players it is good to have a few of to pad out the massive squads of modern day football in the same way I pad out this column with rambling nonsense but not ones to full out the entire squad with and this is the centre of the issue: Manchester United’s team is not good enough to be challenging for trophies, I wouldn’t say it wasn’t good enough for the top four,  although I wouldn’t argue with any of you if you did.

United fans are struggling to learn a harsh lesson in football: Your team has a divine right to nothing. “But we’re Manchester United!” I hear you cry. That is irrelevant, Liverpool fans used that argument for years to justify why they should be League Champions and they have haven’t been able to call themselves that since 1990 and for god sake, I would like for us not to be like Liverpool fans thank you very much!

There seems to be two types of fans outside of that magnificent bunch outside of the Stretford End tier two who were loyal to a fault once again this weekend.

On one hand we have Manchester United fans demanding that Moyes should go or decrying what complete and utter medieval toilet he is as a manager because he has taken a squad of champions to ninth in the league. A brief reminder that last season was arguably one of the least competitive and lowest quality league seasons in years, summed up by a dismal English showing in Europe. Second of all, when you have a manager, who even half-cut and ranting at an imaginary referee in a basement, knows how to win trophies on auto-pilot, has an iron will to win and scares the hell out of his players you can probably add an extra 25% to every player’s performance. For the third point, see third paragraph, this is a poor Manchester United squad with too many old legs, inexperienced legs and also-rans.

Stop thinking we should be doing better simply because we are United, don’t be an idiot. If the playing and non-playing personnel are not good enough you won’t do anything. Get over it and pray we at least return to style of football that is true to the history of the club rather than the turgid, workmanlike, monotony of the last 3 years. Stringing more than 5 passes together would be a nice start. Football is entertainment and as paying fans, you have a right to at least be entertained.

Flip to the other side of the coin with a wholly different type of idiot, the dumber to the dumb, the Miley Cyrus to Hannah Montanna. These people are the ones who will assume everything will turn up smelling of roses because well…why wouldn’t it? “We’re Manchester United, things always work out in the end.” They’ll keep repeating that to themselves as the performances become progressively tepid and we lose more games and Saturday is anything to go off, we will lose more, quite a lot more.

They will assume whatever happens the best players will come to Old Trafford because it is Manchester United. They need a reality check, United doesn’t have the pull outside of England that they think especially outside of England, it is why Hazard said no, Fabregas said no, Thiago said no and our heroic Adonis Cristiano Ronaldo had his agent drop our name into the press to wrangle a bigger contract out of Real Madrid. He’s no fool that kid by the way, he saw the decreasing quality and the owners tightening their grasp and could not do one fast enough. Had Perez come back to the Bernabeu a season earlier he would have bolted right after that memorable night in Moscow.

No cash, no trophies, no world class players simple as that. In the end these eternal, lazy optimists will be what the mythmakers made the Emperor Nero out to be, the deluded fool who fiddled while Rome burned.

It does not matter whether you’re in the Blue Square Premier or you’re a modern day superclub, if your staff are about as good as Fred Goodwin was at banking, you don’t have a right to win anything.

That staff includes the owners too but more on them later…