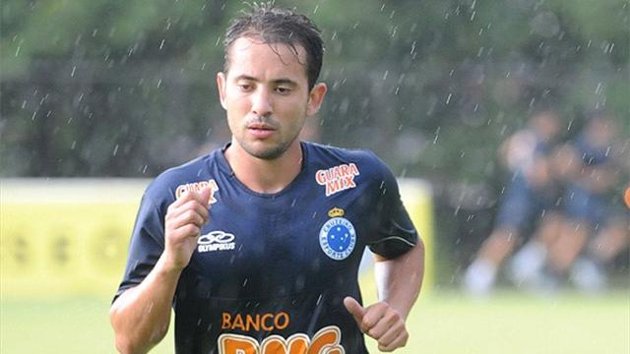 Not many people can boast that they know a great deal about Cruzeiro’s Everton Ribeiro, myself included. Recently, he has been linked with a move to Liverpool and indeed United. It would not appear surprising that Ribeiro is attracting interest from Europe, having helped Cruzeiro to the Brazilian title last year and was subsequently named the league’s best player- not bad with a league containing the likes of Ronaldinho, Leandro Damiao and other reputable players.

To see what all the fuss is about, I had a chat with Brazilian football expert, Paulo Freitas, who gave me the lowdown on the talk of the month.

Hi Paulo, there are a lot of United fans out there who will not have heard of Everton Ribeiro, what are his qualities and what would he bring to United?

Ribeiro is versatile, can play as an attacking midfielder but also in the wings and was originally a left-back. He has good speed and his technique and dribbling skills are very good but he is not the kind of player that dribbles just for the sake of doing so, he does so in an objective way.

How much would it cost us to prise him away from Cruzeiro?

He would cost at least 12 million euros, Cruzeiro turned down a 10 million Euros offer from the Middle East a few months ago.

Would he be able to acquire a work permit through the ‘special talent’ criteria?

It’s not very likely he would get a work permit as he has no senior caps and only four youth caps in 2009. His only hope would be getting it due to have been named the best player in the Brazilian League.

Would he fit in at United? We have had mixed success with South Americans in the past.

I think his versatility would help him fit in, and the Brazilian league is more physical than gets credit for, so that wouldn’t be a problem either. The main issue would be the league tempo and getting into United first team.

If he were to join United, where do you see him playing? Rooney has been outstanding in the number 10 role, we have Kagawa, Januzaj, Valencia, Nani on the wings.

Incidentally, Ribeiro himself as been speaking about a potential move to Old Trafford, and explained the secret to his knowledge of our club,

United have Kagawa, Rooney, De Gea is the goalkeeper. I know them very well because I play with them a lot in video games as they are a great team. You play it one day after the other and know the players even better.

I let my agent and Cruzeiro talk about that. When they feel it’s good for both parties, they will let me know. I’ll see and we’ll analyse everything.

Even though the analogy of knowing the United players through FIFA on the console is a little bizarre, Ribeiro seems enthusiastic about a move, despite the likelihood he will not get the special dispensation he will need to join. There will be skeptical people having seen Veron and Kleberson arrive from South America with huge reputations yet go on to not set the world alight. It remains to be seen how concrete our interest in Ribeiro is, but with January approaching, we will not have long to find out.

Aside from Ribeiro, I managed to have a quick word with Paulo about Bruno Gomes, the striker Sir Alex was very keen on, especially after 122 goals in just 3 seasons in Brazil. The move was on, then off, back on before eventually collapsing recently when he announced he was joining Internacional in his homeland. I asked Paulo why we went cold on the striker:

Could you just tell me a little bit about what happened with Bruno Gomes? Why did the move to United break down? And can you see us going back for him, if he establishes himself at Internacional?

Bruno Gomes’ father wanted a team where the striker could play in the senior side from the start. Neither Manchester United nor São Paulo would provide that while Internacional agreed to do so. He will now be an Internacional player, not a Desportivo Brasil one, so if Man United get interested, they will not have any advantage apart from maybe Bruno Gomes wanting to join them.

A special thanks must go to Paulo, who has once again provided us with great information.