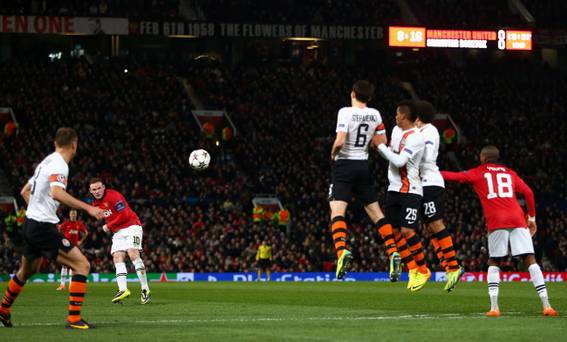 The Ukrainian champions had multiple chances but United luckily kept a clean sheet and prevailed through a second-half goal from Phil Jones.

Despite all the criticism David Moyes has received since succeeding Sir Alex Ferguson, the result gave United three home victories in a single group for the first time since we last won the competition in 2007-08. The Reds have been solid in Europe this season and now have two months to focus on getting our league form back on track.

We can now look forward to the last 16 draw which will be made next Monday. Topping Group A, of course, means the return leg will be played at home.

Having sat through a few rough weeks of draws and defeats, the North Stand booed the team off at half time. This game after Shatkhar showcased their eagerness to exploit United in what was realistically a nothing game given how we had already qualified. Securing top place, however, leaves us with something to gloat about.

Alex Teixeira and Douglas Costa were both on song for the Ukrainian side. The latter, who we have been linked with for years, kept a urgent flow up front and picked up on many of Rio Ferdinand’s errors. The former England captain looked ponderous, as did fellow veteran Ryan Giggs, conceding possession in dangerous areas.

While United continued to gift Shakhtar Donetsk chances in the second half, a few suspensions saw them before with more composure. Tom Cleverley made the main difference after replacing Giggs. The introduction of Robin van Persie further energised the Old Trafford faithful.

A win is a win. Although despite securing top spot in a competitive group, there’s of room for improvement.