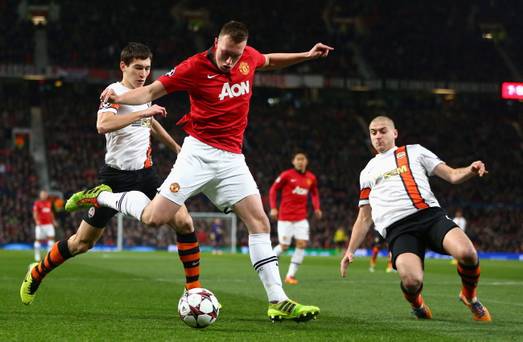 David De Gea – Flapped at a cross in the second half but ultimately had a relatively quiet night. 6

Rafael – Attacked well as always, but was caught out of position a couple of times without it costing us. Our play always looks better with him marauding down the right side. 6

Jonny Evans – A better display from him after the weekend. Looked solid, put in some crunching tackles and was always there positionally to snuff out Shakhtar’s attacks. 7

Rio Ferdinand – A very poor night from Ferdinand. Constantly gave away possession with poor passing, caught out horrendously in possession which nearly cost us. Some pointed out it reminded them of Gary Neville’s West Brom debacle. Looked leggy and sluggish. Maybe he should keep his mouth shut about David Moyes in future. 4

Alex Buttner – Provided good width down the left, got into threatening positions, but his crossing was a mixed bag and something he needs to improve if he has a United future. 6

Adnan Januzaj – A breath of fresh air yet again. He just glides past players with ease, our main attacking threat once again with some glorious touches and good vision. Is he really 18? 7

Phil Jones – Bossed midfield after the first half. Even when we were getting outplayed he was putting himself about, putting in tackles and tried to get a grip on midfield. His goal was not the finish of a centre-back playing as a makeshift midfielder. The strike has eased the pressure on David Moyes. 8 MOTM

Ryan Giggs – A bit sloppy in possession but always got his head up and picked a pass to keep us ticking over. Not one of his better performances and subsequently replaced. 6

Shinji Kagawa – Virtually anonymous in the first half, but grew into the game and appeared more prominently as we controlled the second half. Another chance in the hole tonight but he didn’t quite do enough to stamp his authority. Has got to do more. 6

Ashley Young – Linked up better with Alex Buttner in the second half, but it was the same old story (minus the simulation tonight)- over-hit crosses, predictable play and inexplicably missed two golden opportunities. Will he get many more chances? 4

Wayne Rooney – Didn’t get the service in the first half, but he grew into the game and was key in controlling the game after taking the lead. 6

Tom Cleverley – Increased the tempo and made a difference in winning the midfield battle. Much better after a few indifferent performances. 7

Robin Van Persie – Given half an hour just to ease him back into the fray. Missed a lob in the last minute which on another day he might have taken. 6

Antonio Valencia – Not much time to make an impact, gave away two fouls. 4