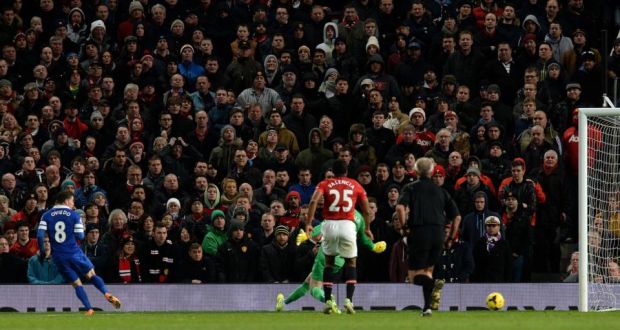 David Moyes admitted his side are now playing catch-up after losing ground on title competitors are a run of results went against us on Wednesday night.

Manchester United suffered a 1-0 defeat against Everton at Old Trafford making it an unhappy first meeting with the club Moyes left during the summer. Bryan Oviedo’s 88th-minute winner granted the Merseysider’s their first win away to United since 1992. Our last three fixtures in the league have seen draws away to Cardiff and Tottenham Hotspur along with a home defeat to Everton.

Arsenal are now 12 points clear on top of the Premier League table and it’s the first week in December. The league has never been won this early and despite expecting the teams above us to drop points along the way, I can no longer see us retaining the title. Although, top four is within reach.

“We are very disappointed. We didn’t take a couple of chances that we had – we needed a bit of good fortune, but one of two things hit the post and Tim Howard made one or two saves. Everton kept at it and showed how good a team they are. They got the one goal. We had opportunities, but Everton did as well, they’ve been playing well and that’s why they’re up near the top of the league.”

Disappointed is certainly a word I’d use to describe my feelings at full-time but I still believe a lot of it comes down to messing about during the summer. The squad Moyes has been left isn’t good enough and there’s no arguing that. Also, it’s unforgivable Moyes wasn’t properly backed by the club throughout the transfer window. After all that nonsense, it was always going to start slow.

It’s important we get behind our manager.