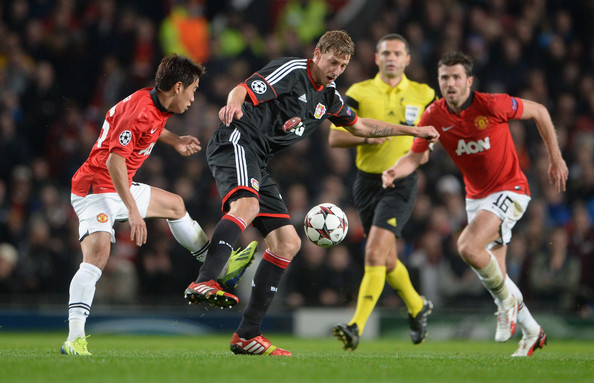 One of the dangers of writing a regular column on football is being proven wrong the day after you submit it for publishing. And so it was for me last week. I had claimed that, unlike City and Chelsea, United didn’t have more gears to move up in to. 24 hours later we stuffed Leverkusen 5-0 in Germany in a performance of the sort of quality we haven’t seen in some time. It was like meeting an old girlfriend in the street that you haven’t seen for years who, it turns out, still bewitches you. She’s way fitter than recent Facebook pictures suggest. This was like watching United in full flow circa 2007, or 98/99, ripping teams apart in Europe. Unfortunately there is one significant difference from those legendary teams. Our modern day United returned to domestic football and reverted to type. Still missing Michael Carrick and RVP we were second best to Spurs for long periods and very lucky to be gifted two goals, gobbled up by the irrepressible Wayne Rooney. While all around was stinking, he was a man on an ultimately semi successful mission.

The contrast between the two performances was stark. At Leverkusen, United excelled on the counter-attack, retained possession of the ball in tight areas and viciously exploited the gaps in the Leverkusen midfield. At Spurs, as in many of their Premier League games to date, we didn’t do any of those things and gave away countless soft and unnecessary free kicks and corners. With Cleverley and Welbeck restored to the lineup in the place of Giggs and Nani, both of whom were excellent on the Wednesday, United lost width and midfield class. Cleverley has scored no goals this season, has no assists and has had only four shots on goal. Welbeck was understandably rusty and is totally unsuited to the role of wide attacker anyway. If you take away width and creativity from any side that’s style relies on both, then the performance will suffer. The result at Spurs can, however, be viewed as decent in isolation. Against a side with a midfield we could only dream of we played poorly, twice went behind and still got a point. It is not results such as this that have cost us a shot at the title, but the aberrations against Cardiff, Southampton and West Brom. Leverkusen, second in the Bundesliga or not, were also a far worse team than Tottenham. Over two legs they were tactically and defensively appalling. United were ruthless and dispatched them in style. Few English sides would allow their opposition as much time and space and display such tactical naivety.

The player who epitomized the schizophrenic nature of the two performances most was Shinji Kagawa. The Man. The Myth. Everyone knows how magnificent a footballer he is but few have actually seen it. “Everybody keeps telling me how good he is”, said David Moyes before the home game against Leverkusen, a line he repeated again more recently. He too, it would seem, has been puzzled by the massive performance gap between ‘Shinji The Bundesliga Slayer’, ‘The Maradona of Mount Fuji’, and the gifted but ineffectual and lightweight mouse we see lineup for United most weeks. “He’s being played out of position”, the dissenters cry. “He must be tired, unfit, feeling wasted and unloved.” “He’s world class.” For eighteen months I’ve bought that line. I saw him at Dortmund, a barnstorming, counter-attacking, goal-scoring, Tasmanian Devil of a footballer. When we signed him in 2011 it was a rare case of a player who I yearned for at my club actually being signed. I spent July of that year with a permanent goofy grin on my face. And then I waited.

And then came Norwich at home last season. The Myth became reality as he tormented the hapless Canaries, scoring a technically beautiful hat trick. HE, The Slayer, had arrived. And then I waited again.

Months and months. Until last Wednesday. The Nippon Messi was back, ripping Leverkusen to shreds. Now was his time. And I waited.

Only four days this time. And in front of my eyes The Slayer disappeared again in a puff of smoke, unable to find or utilize space, both on the left or behind Rooney. And the penny dropped. In the wide open spaces of the Bundesliga, or against occasionally tactically inept domestic opposition, he can shine, but he’s been unable to find that space and impose himself on a game in the frenetic, suffocating atmosphere of the Premier League. Great players adapt in time and he hasn’t. No more excuses, positional, physical or emotional (and that applies to you too, Mr Klopp). He’s said himself several times that he hasn’t played well enough and it’s time that we listened and took him at his word. It’s ok to hope that he’ll still prove his own worth and explode as we all imagined, but it’s time to stop peddling The Myth. No more criticizing Moyes for not playing him, claiming that he’s driving Kagawa away or making excuses for another anonymous performance. He has to prove that he’s good enough for Moyes and Manchester United, not the other way around.

Most United fans, consciously or otherwise, have their on-pitch scapegoats for the team’s current failings. I don’t rate Tom Cleverley at all and often single him out when others have been ineffectual too. For some it’s Danny Welbeck, Nani or Marouane Fellaini. And yet Kagawa’s performances in the last 18 months have been little better. But he has protected status, based purely around the hipster created Myth of Shinji, football genius. It’s time to demand more of him and if he can’t meet those demands then he’ll probably leave in the summer. He has beautiful touch and technique. There’s a footballer in there somewhere, but short flashes aside isn’t proving his worth. If he can’t and he goes it will be his loss, not Manchester United’s. It’s time for The Myth to make his entrance or quietly leave the building.