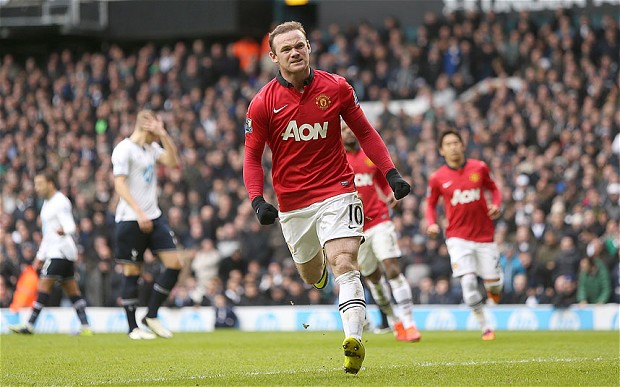 On Sunday afternoon, Manchester United were unable to walk away from White Hart Lane with three points, but David Moyes’ side have shown plenty of resilience to come back from one down on two occasions. As United and Spurs drew to 2-2 on the afternoon, the reds continued their unbeaten run in all competitions to 12 matches.

However, heading back to Manchester, Moyes’ men may be disappointed with the result. For large stretches of the match it appeared as if United were chasing Spurs throughout the park, and in particular in the centre of the park. Tom Cleverley and Phil Jones displayed limited moments of brilliance as a unit, with Jones far exceeding expectations once again in the centre of midfield.

Cleverley went missing on numerous occasions, gave the ball away cheaply in possession, and appears the young Englishman needs a bit more time to develop into his role.

In the early stages of the match, Manchester United looked to have the better start of the two clubs. With the constant pressure on Hugo Lloris in the first quarter of an hour it looked as if United were to take an early lead; however to no avail.

Spurs jumped out to an early lead as Kyle Walker opened the scoring from a free kick only 18 minutes into the match. Paulinho did well to work his way into the United final third and earned a free kick as a result of a poor challenge from Jonny Evans. From the resulting free kick by Walker, he punched the ball underneath the four-man wall in front of David de Gea. Walker smashed his attempt just past the outstretched right hand of de Gea.

Wayne Rooney would bring the reds level after 32 minutes courtesy of Phil Jones’ tireless work rate in the centre of midfield. The versatile England international stripped Spurs midfielder Moussa Dembele of possession and curled a cross into the mixer. The goalscorer, Walker, was unable to handle the driven cross properly thus deflecting the ball to Rooney who finished past Lloris for his seventh league goal to date.

United appeared thankful with the 1-1 draw in the first half, as nearly 10 minutes before it was Roberto Soldado who missed a fairly easy attempt on de Gea. The Spaniard made saves on Soldado and then Aaron Lennon, before the reigning Premier League champions turned their defense into attack and leveled the match.

As White Hart Lane emerged as a 12th man throughout the match, urging the Spurs forward, the hosts were able to take the lead for the second time in the match after Sandro brilliantly cut back to his right foot, and unleashed a cracking strike into the top right corner of the net. Sandro appeared to elude Cleverley with absolute ease before his fierce and unstoppable strike hit the corner of the net.

Yet, in the reds fashion – Moyes’ men would not sit back. Danny Welbeck pressed forward and within three minutes of the Sandro go-ahead goal, Welbeck was taken down atop the box by Lloris. And as Lloris dove to his left, Rooney slotted home his second of the match, to level it 2-2 after 57 minutes.

As both searched for the decisive goal in the final half hour of the match, Spurs looked the more potent attacking side. Welbeck, was unable to convert a chance on net, while Andros Townsend was also unable to put his side ahead.

Hearts skipped a beat as we entered the dying embers of the match, and with 10 minutes to go, the inclusion of Javier Hernandez and Nani seemed to bring a little life to the side. Just as Chicharito has done so well in the past in scoring timely goals, Sunday would bring no such luck to the Mexican international.